Well thanks to Decluttr and a lot of Google data, we have our answers – and they are surprising to say the least: 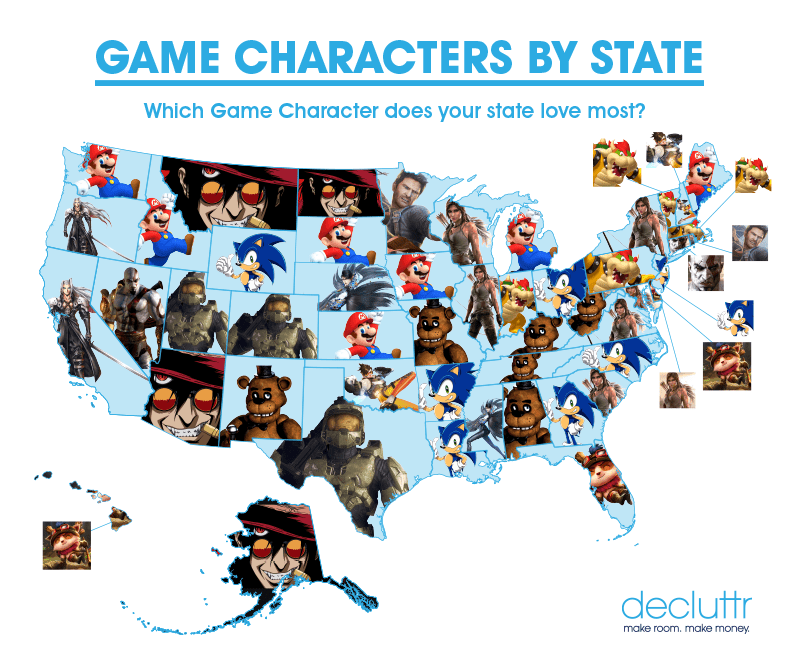 Well as we can see, Sonic and Mario are neck and neck with 7 States Each. Following closely behind is Lara Croft and … Freddy Fazbear? For those who don’t know (like myself), Freddy Fazbear is a character from horror series Five Nights at Freddy’s. There’s of course some expected characters on this list such as Master Chief from HALO, Sephiroth from Final Fantasy 7 and Alucard (although they use Alucard from the Anime and not the one from Castlevania series). Though there are some things about this list that surprise me. For starters, I’m surprised new power house characters like Aloy from Horizon Zero Dawn aren’t on here. In fact, the only ‘new’ character on this list is Tracer from Overwatch who won Oklahoma and New Hampshire! Just as surprising there’s no Pokemon on this list.

This all raises the question “what stats did Decluttr specifically use?”. Did they just look at ‘Character Names’ as opposed to overall game searches? That would explain why Pikachu or any Pokemon didn’t appear as each of the 700+ character would be different searches. Additionally, this shows why characters who haven’t had many recent games still appear on the map as well as why Mario and Bowser are different winners. Though beyond this, we also don’t know the timeline of the pulled data. Was this data for the past month, past year or some other length of time?

Though whatever method was used, it’s still fun to see how the United States maps out. We sometimes think everyone plays what we play, and there’s plenty of characters on here I never would have imagined making the #1 Spot. It’s also interesting to see which states got what. I’m looking at you Connecticut! You’re such civilized and peaceful people. Who would have ever imagined that the fiery God of War is your #1 choice? This just goes to show that we’re all brought together by some incredible video game characters – and that you should try to keep the Blades of Chaos away from anyone with a CT Driver’s License ….