The Suicide Squad grows closer with each and every day, and the movie shows some serious promise. James Gunn has been heavily promoting the film in the months leading up to it. Here are some new photos giving us a look at the supervillains ahead of the movie’s release in a couple of months!

It’s not just supervillains we get a look at, it’s  “sh-tty supervillains,” according to James Gunn. At least, that’s what he said to Entertainment Weekly, which is honestly a pretty… hilarious comment if you ask us.

The pictures in question give us a look at Idris Elba, John Cena, and Sylvester Stallone as Bloodsport, Peacemaker, and King Shark respectively. A few others as well, but your eye is definitely drawn to them! 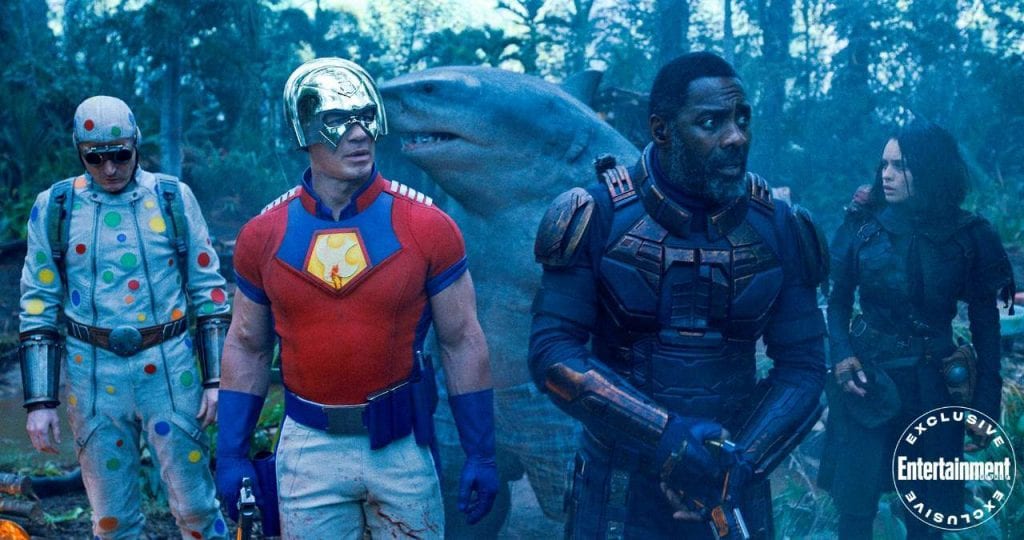 Producer Peter Safran told the outlet that: “Corto Maltese has alien materials they’re trying to weaponize to use against the United States and the rest of the world,” Safran said. “The Suicide Squad are told to go [there] and destroy Jotunheim, which is this giant fortress.”

He wasn’t the only one with something to say though. Margot Robbie, returning to be Harley Quinn, had a lot of nice stuff to say about the location. That, and the special effects they use to bring the more outlandish elements to life.

“The first set we shot on was this beach,” Robbie said. “It was so amazing. Palm trees. An ocean with a wave machine in it. Pyrotechnics. Special effects. Explosions everywhere. It was like being in a proper, crazy war movie.”

James Gunn has warned fans to not get attached to any character. The director revealed some time ago that he wasn’t averse to killing fan-favorite characters. In fact, he seems to have no problem with it.

The first thing I had to do was ignore the potential blowback from killing a character. I’m just the servant of the story, so whatever the story says is what I’m going to do, no matter what the repercussions are for anything. I believe in the truth of the story. I believe that there was a story out there that needed to be told that I don’t have any control over.” he said while speaking to Den Of Geek.

What did you think of The Suicide Squad set photos? Let us know in the comments!

The Suicide Squad releases in theaters and on HBO Max on August 6.

Home » Movies » The Suicide Squad: Here Are Some New Set Photos Giving Us A Look At The Supervillains!