Everyone knows that September 1st is when the Hogwarts Express takes new witches and wizards to school. Once they arrive, they are sorted into the four legendary Hogwart’s Houses: Gryffindor, Ravenclaw, Hufflepuff or Slytherin.

Last year, TIME magazine teamed up with Cambridge University to create the ultimate quiz to see what house you truly belong in. Over 1 million people took the quiz and the results helped give information to the research on personality distribution.

Here’s what they found:

The majority of America is in Ravenclaw or Hufflepuff.

“This is not surprising. Gryffindor and Slytherin generally play host to the books’ most extreme fictional characters, while we found that Ravenclaw and Hufflepuff were closer to the average, non-magically-embroidered personality.”-TIME 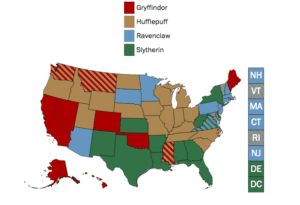 The map above shows that Hufflepuff is prevalent in the middle of America, while Slytherin gravitates to the South, Gryffindor to the Southwest, and Ravenclaw to upper New England.

So did the quiz sort you into the house that fits your area? Is it also the house all of those others quizzes have sorted you into? Let us know!

As for me, this quiz sorted me into Hufflepuff, but deep down, I know I’m in Ravenclaw.

Home » Fandom » The Sorting Hat divided America into the four Hogwarts Houses, Where did it Place You?