WARNING IF YOU HAVE NOT WATCHED UP TO SEASON 4B EPISODE 5 DO NOT READ THIS. MAJOR SPOILERS BELOW

Last week audiences saw the inevitable demise of one of the most interesting characters television has seen in a long time, Ragnar Lothbrok. The story of Ragnar has been so complex and brought us an abundance of colorful characters and intriguing story lines. While we will mourn the loss of such a beloved character his death leads the way for the story of his son’s who in the history books are arguably more famous. While it is sad we won’t see the infamous viking so many thought were favored by the gods every week, we shall look at a few moments/relationships that show what made Ragnar so undeniably unique.

Ragnar and his brother were a lot like any siblings, they had their ups and downs. They fought side by side and on opposite sides. The first episode starts with them fighting and doing so as a well oiled machine. When they fight against one another it is brutal and often tragic. There were several times that it was unclear where their choices would lead the brothers, in the end the last time they see each other is a bitter brawl between King Ragnar and Duke Rollo. It was a tragic end to an interesting relationship, here is to hoping Rollo sticks with Bjorn and sails back to England!

One of the first great deeds we see Ragnar accomplish is sailing to England, he does so without the permission of his Earl. He has Floki build him ships that will take him, and  not only does he succeed he comes home with much treasure and a thirst for more. He was the first viking to sail west, this is the first epic conquest in the story of Ragnar. His Earl was pleased with the loot, but displeased with Ragnar’s ambition and that Ragnar would be getting the glory for the voyage instead of himself. The Earl let each of the raiding members take one item, Ragnar takes the priest he brought with him, Athelstan. 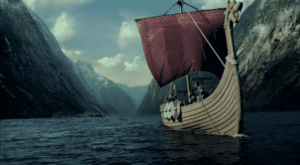 After becoming the Earl of Kattagat, it doesn’t seem like Ragnar could want for much more. During season two there was a subtle cat and mouse game played between Ragnar and King Horik. By the end it looked like Horik had convinced both Floki and Siggy to betray their friend and earl and help in his assassination, but as many had learned up to that point and many learned after you might be able to beat Ragnar in strength but never in a game of wits. Ragnar had wanted Floki and Siggy to play into Horik to give him a false sense of victory. In the end Horik is brutally killed and Ragnar ascends to King.

Ragnar’s entire life changed the minute he spared Athelstan that first trip to England. He became his best friend and confidant, there was no one Ragnar loved the way he did Athelstan. He changed the way Ragnar saw the entire world, and revealed to him that the world was much larger and grander than he had previously thought. Athelstan was the only character that had no agenda of his own, by the end he was there solely because he loved Ragnar and Ragnar loved him in return. Ragnar is almost a different character after this loss, he knows from the moment of Athelstan’s death that his dear friend Floki is responsible and his relationship with Floki is irrevocably changed.  The burial of Athelstan is one of the most heart breaking things I have ever seen, and you can feel the sorrow and seer agony.

“I always believed that death is a fate far better than life, for you will be reunited with lost loved ones. But we will never meet again my friend. I have a feeling that your God might object to me visiting you in Heaven. What am I to do now? I hate you for leaving me. I ache from your loss. There is nothing that can console me now. I am changed, so are you.” – Ragnar

Ragnar had become obsessed with Paris from the first time Athelstan had mentioned the majestic city surrounded by great walls. The death of Athelstan left Ragnar in a strange place and out of sync with his people, they found Ragnar’s obsession with Athelstan and his Christen God upsetting. This lead to Ragnar allowing Floki to plan the assault on Paris. Floki failed and many vikings were lost, Ragnar was severely injured by the fight after falling pretty far off a ladder. Ragnar succumbed to his injuries and died. Before his death he requested to have a christian burial to once again be reunited with Athelstan in heaven. So his dead body was brought into the walls of Paris to get the funeral he had requested. Ragnar being the master of nefarious plans had something in the works that only Bjorn was aware of. The closest of his viking friends are allowed to say their farewell at this point Floki tells Ragnar in the casket that he killed Athelstan. During his own service he pops out of his casket, kills some people while making the Emperor literally faint and opens the doors to Paris.  The vikings are successfully able to raid the city, though Ragnar really is injured he succeeds in an impossible task.

The architect of his own demise

Ragnar has a mission in mind when he returns from his long absence after his defeat in Paris by Rollo. He wants to return to England to avenge his people that were left behind to start a farming settlement that Ecbert had killed. By the time they reach Wessex the raiding party is dead…either drowned or killed by Ragnar and Ivar. Ragnar knows that if he turns himself over to the Englishmen he will be killed. While King Ecbert is a terrible guy he and Ragnar have a bound, they are both sorta terrible people who are willing to do  absolutely awful things for their success. They also both had a powerful connection to Athelstan and I think part of their bound is due to the way Athelstan spoke to them of the other. Ragnar knew that if he was killed at the hands of the English his sons would return to England with a vengeance. Ragnar agrees that if Ecbert turns him over to Aelle that he will send Ivar home and tell his sons that the kingdom of Wessex did everything they could to save Ragnar. Being true to the character we have known and love he does the exact opposite. Telling Ivar that he is to go home and let his brothers know that they must return to England and Wessex must pay. Ragnar was a master of his own destiny from the moment he is introduced until he closes his eye.

While it is sad to see such a fantastic character go, it was the definition of an epic journey and so incredible to watch. Travis Fimmel and Micheal Hirst did an amazing job bringing such an interesting character to life for four seasons, and he will be greatly missed.  The events Ragnar set in motion will make for riveting television for as long as the show continues. Now that we have completed the Saga of Ragnar it’s time to see what the Sons of Ragnar Lothbrok have in store for us.

And if you are still sad look how cute Ragnar and this lamb are!