I know, I know, I know, I’m a bit late today with the post. But I have a perfectly good explanation for my tardiness. For starters after work I had to run out and, finally, buy my copy of Harry Potter and the Cursed Child. It was more time consuming then anticipated. On top of that I kind of got caught up in a Pearl Jam internet worm hole as I was looking up info about their shows this weekend at Fenway Park. Needless to say time got a way from me a bit. But I’m here now! Let us rejoice (insert your rejoicing here!).

Happy New Comic Book Day Geeklings! I really like the releases this week because it seems like the first time since I started doing The Pull List where the independent books kind of dominate a bit. This post is frequently owned by the big two companies but this week two of my favorite releases come from the independents, and that’s not including the newest issue of Paper Girls because I left it off the list.

Rebirth is in full swing this week with tons of new titles dropping today with Justice League, Green Arrow, and Superman among them. Over in Marvel Daredevil gets an annual staring Echo, Punisher gets a new issue, and Deadpool gets a Civil War II tie in. Quick note, as of a few minutes ago Comixology has the latest issue of Civil War II as the top best selling comic, and then the following nine spots are held by DC books. I found that rather interesting. Marvel may own the movies (and that grip might have even tightened if you believe some of the Suicide Squad reviews) but Rebirth is really giving them a run for their money. I think it’s something worth keeping your eyeholes on. I mean, that’s why I mentioned it.

Now, on to the Pimp Spot books (Hooray!)… 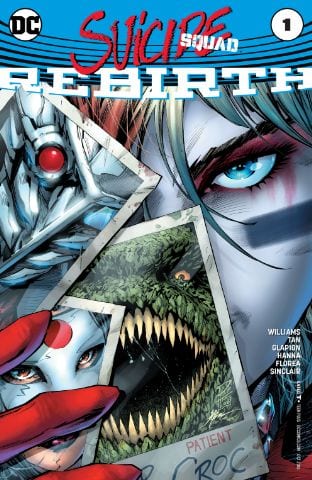 1. Suicide Squad Rebirth #1– You guys may have heard that there is a little movie dropping this Friday called Suicide Squad. You may have also noticed that one of the titles missing from DC’s new Rebirth line up has been…… Suicide Squad. Well this is no longer an issue because the very clever marketing people over at DC having been waiting to drop this comic at the same time as the movie and capitalize on all that popularity (or maybe not if you believe the reviews). Either way DC has poised itself for a very big Suicide Squad weekend. The Rebirth issue will re-introduce the team (hello Killer Croc we see you) and a new writing team hoping to bring the book back up to form. Suicide Squad has been a very up and down title for DC and here’s hoping that the movie and this new team could restore some fun and constancy to the title. I for one am a bit nervous about the movie now (damn critics getting in my head). I had this thing pegged as DC’s Guardians (in my defense it was totally marketed that way) and really would like them to score a win here after BvS. I’ll know more tomorrow night when I go see it. In the mean time new comic book! 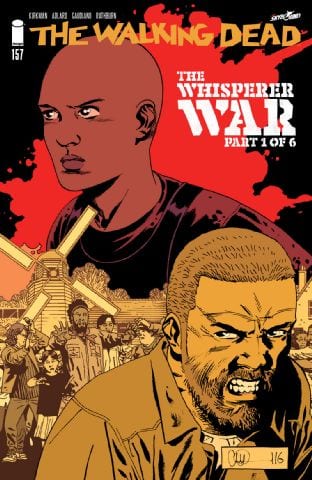 2. Walking Dead #157– Confession time Geeklings… I don’t read the Walking Dead on a monthly basis. I knoooooow, but allow me to explain. When I first started reading the series, waaaaaaay back, it was through the collected graphic novels. I flew through those babies at lightning speed consuming Rick and Companies struggle with the undead like a teenage girl collects Twilight posters (is that still a thing that teenage girls do?). Once I caught up I just kind of stuck to collecting the trades. I really like how they look on my book shelf. Needless to say I don’t have the most current info on the series, but I do know enough where I’m not spoiled and pass on some knowledge. For example I know last month that a certain villain killed a major character (I have an idea but not sure) and this month is the start of The Whisper War (I don’t just know that because of the cover). This story line with the Whispers has been really refreshing for the series and I have no idea what to expect from this war. I do wonder if Kirkman will finally pull the trigger on his promise that Rick won’t survive till the end. It’s the Walking Dead so expect the unexpected. 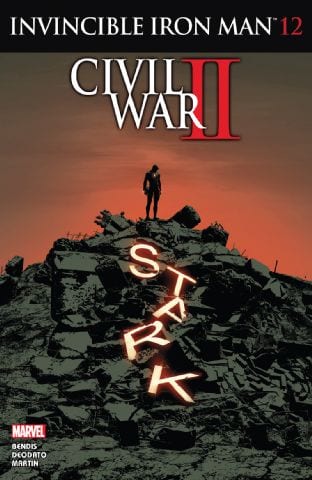 3. Iron Man #12- This week in favorite covers. I just love this one. Civil War II has been kind of a tough time for Tony. Rhodey is dead, Captain Marvel seems to be winning the PR battle, and Tony sees himself begging and pleading with his friends to agree with his stance. Not to mention the whole parent drama that’s been going on. There’s no doubt that after Civil War II ends that Tony could use a break. That’s where Doctor Doom and Riri Williams (who has a face to face with Stark in this issue) come in. There will be a changing of the armor come the end of this summers event but the question we should be asking is will Tony be stepping down or will someone need to be stepping in? Most big events end in the death of someone important and the end of the first Civil War saw the death of Steve Rogers. Could Marvel be looking to have this be the ying to that yang? 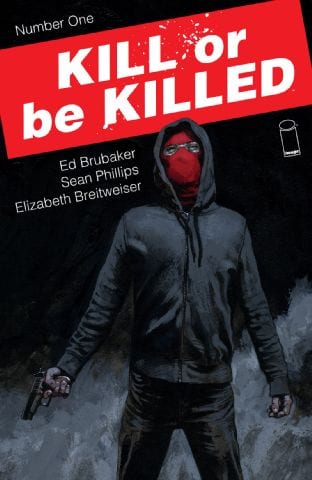 4. Kill or Be Killed #1– Ed Brubaker wrote some of my all time favorite Captain America stories and his creator owned series, Fade Out, recently just wrapped. Well, there’s no rest for the wicked as his new creator owned series Kill or be Killed drops over at Image this week. I read an advance review on this book about a month ago, thinking the book would be out sooner, and I’ve been patiently waiting for this to drop since. It’s been killing me (oooooh accidental pun!). The premise of the book is our main character is a vigilante who has to kill one person a month as the book explores what it’s like to be a vigilante along with the effects violence have on those committing it as well as experiencing it. Early reviews claim it has some serious Breaking Bad/Spider-Man type vibes to it, and that’s enough to sell me on the title. Plus Brubaker is a fantastic story teller. Think of Spider-Man if when he says “with great power comes…” a whole lot of killing people. Not as catchy but could work. 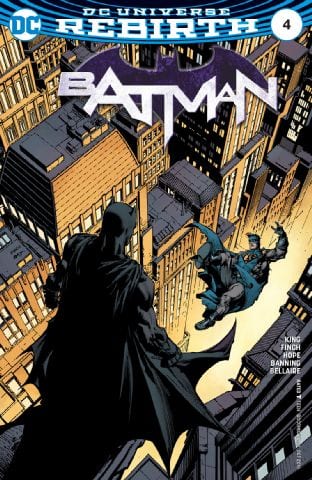 5. Batman Rebirth #4– First I think I might owe Tom King a sort of apology. Not that I thought his work on Batman has been bad, but I was worried if he would be able to follow the large void left from the departure of Scott Snyder. After reading his work on The Vision (oh my sweet baby Jesus is that book good) I have little doubts on his ability to eventually fill that void. This first story arc has been pretty solid introducing new characters as well as old foes. Look for King to continue to find his footing as his run goes deeper, but thus far he’s given us very little to complain about.

There you have it Geeklings! The five books worthy of your adult dollars. If you felt I left anything out or want to talk about the Suicide Squad movie then please see the comments. If not, happy reading and I’ll see you next week!