Howdy Geeklings! Welcome back to another addition to The Pull List or as you guys have voted, “the best column that ever did exist” (this is not a vote that actually happened but in my head this would be the result). Today has been a day with many a geeky highlights. For starters Stranger Things was finally picked up for season two (thank the gods), I found out that Hop and Eleven are going to be at NYC Comic Con which is super exciting for me, Funko released images of Rogue One pop vinyl figures, and as the backbone of all that… New Comic Book Day! What a glorious time to be alive my friends.

So, what’s hitting the shelves this week? Well surprisingly not a lot of DC titles. It seems that Rebirth needs to take a breather from all the money it’s making (this event is straight up owning comic book sales this summer) which leaves the door open for a lot of Marvel titles like Guardians of the Galaxy, Amazing Spider-Man, and Nova. Even with Rebirth taking the week off there are still some DC books to set your peepers on. Be sure to check out Suicide Squad: War Crimes and Gotham Academy. Like  I said, not a whole lot going on in the DC front but to make up for that we can look at our indie books as new issues of Rick and Morty, Afterlife with Archie (a zombie Archie story), and the final (for now) issue of Tokyo Ghost.

But those aren’t the books you came to read about. Well, you did because this is a comic book column and you want to know about all the books you could be reading. Although you’re actually here to see what books made it into the Pimp Spots this week. You know, those books that are too good to get a casual mention. The books of the week if you will, and I will… right now. 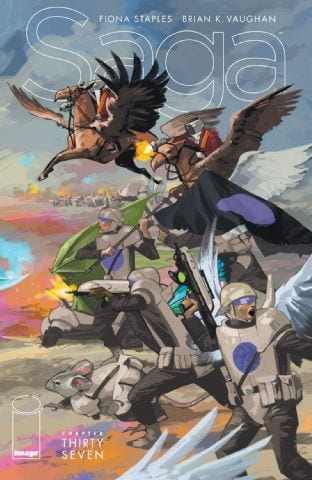 1. Saga #37– It seems like for-ev-er since the last issue of Saga dropped, and while I’m a big fan of the way that Vaughn and Staples publish the book, I was starting to jones for new issues. Well it’s a good thing that the latest Saga hiatus has come to a close and a new issue has finally arrived. We last left off with everyone’s favorite galactic fugitive family finally (alliteration!) reuniting. Oh, and Alana is pregnant. Saaaaaaaaay what?! This new volume of Saga is being titled as the “The War For Phang” and Vaughn describes it as the closest thing this book will have to an event comic. Sounds like ten pounds of awesome in a five pound bag. Welcome back Saga. 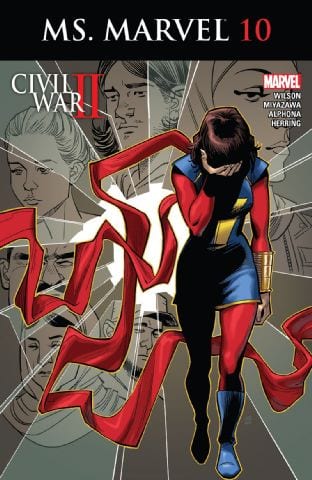 2. Ms. Marvel #10– Out of all the Civil War II tie-ins that I’m reading, and there are a handful, none is handling the job more superbly than Ms. Marvel. While the event is an important factor to the book it’s not the driving force which allows Ms. Marvel to stay grounded in it’s characters and advance their story. I will tell you that issue ten is a wonderful comic filled with tons of heart and feels. This book continues to grow with Kamala as she learns to balance being a super hero, a student, and family and friends. The problem though is those things don’t always balance, despite how hard you try, and there are sometimes casualties. How Kamala responds to these events and grows is the bigger question that hangs over the book, and with Marvel Now 2.0 looking to give her a big push, one could expect a lot of fallout in her future. In the mean time her comic continues to be one of my favorite reads every month. 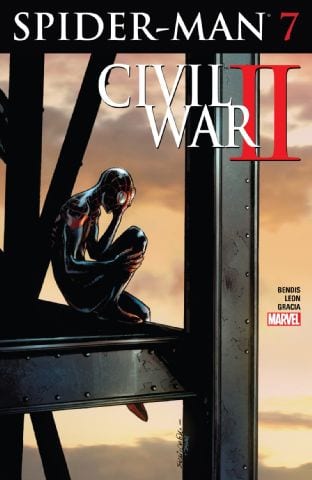 3. Spider-Man #7– This would be my second favorite Civil War II tie-in basically for the same reasons as Ms. Marvel. Before I break this book down I have to say that I love how similar in nature this cover is to Ms. Marvel. Both Miles and Kamala look to become important parts of Marvel’s future (new Champions series will be a must read) and both are wrestling with similar issues. Being so young and thrust into a war that isn’t his leaves Miles wondering what the right choice is. Does he blindly follow Tony Stark into battle because they’re Avenger pals or does he make a stand for what he believes in? Spider-Man tackles some really excellent issues this month and is another wonderful read coming out of Marvel this week. Not to mention there’s more Jessica Jones. Bendis is shaping something here and I’m more than curious to see what it is. Why can’t this book ship twice a month?! 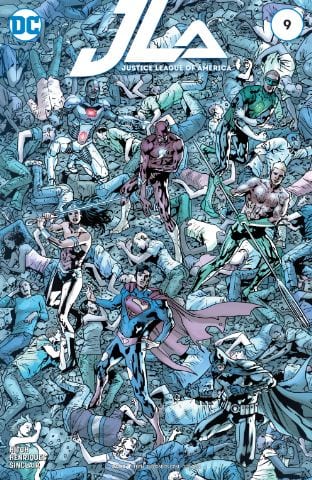 4. JLA #9– See what I mean? Not a whole lot of DC this week, but that’s okay because I’m really behind on the majority of my DC books. All that twice a week shipping is catching up to me, but I do plan on spending some of my Labor Day Weekend binge reading some comics. What better way to cap off a summer?  I really like this cover by the way. There’s a lot going on but I dig the chaos. This issue sees the Justice League continue to battle with Rao a task that looks more and more difficult to overcome. But they’re the Justice League so chances are they’ll find a way. 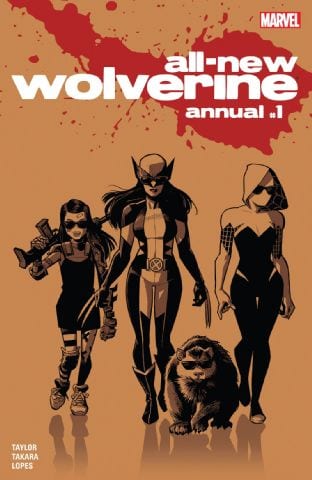 5. All New Wolverine– I do not read a lot of All New Wolverine. I also do not like Annuals, for the most part. I chose this book for two reasons. Reason one being All New Wolverine is probably the best X-Men book on the shelves right now, and X-23 has done a terrific job filling the absence of Logan. I love that the appearance of Spider-Gwen sort of mirrors the relationship between Logan and Peter. When stories do little things like that right it makes me all warm in fuzzy inside. Reason two for picking this book is I just love the Reservoir Dogs style cover. I look at it and hear Little Green Bag in my head… it might be time to re-watch that.

There you have it Geeklings! Those are the books that you need to take from the shelves and into your hands. As always if you have book suggestions feel free to drop them in the comments. And for those of you who have read Tokoyo Ghost on a scale of one to “read this shiz now”  how does it rank? I’ve heard great things but haven’t gotten to it yet.

Images from Marvel, DC, and Image.