Geeklings, I would have been here sooner but I got caught watching that guy try and climb Trump Tower with his merry band of suction cups. I wonder what propels someone to think that that is a good idea. Is it something where you wake up one morning and just randomly decide, “hey I’d really like to climb a glass building with a set of suction cups”, or is it more of a life time dream to one day pursue? You would have to think that there is some sort of training involved, whether it be upper body or with suction cups. The only thing that really boggles my mind is how this guy decided to do this… and didn’t dress up like Spider-Man. It feels like a massive missed opportunity on his part. Maybe next time? 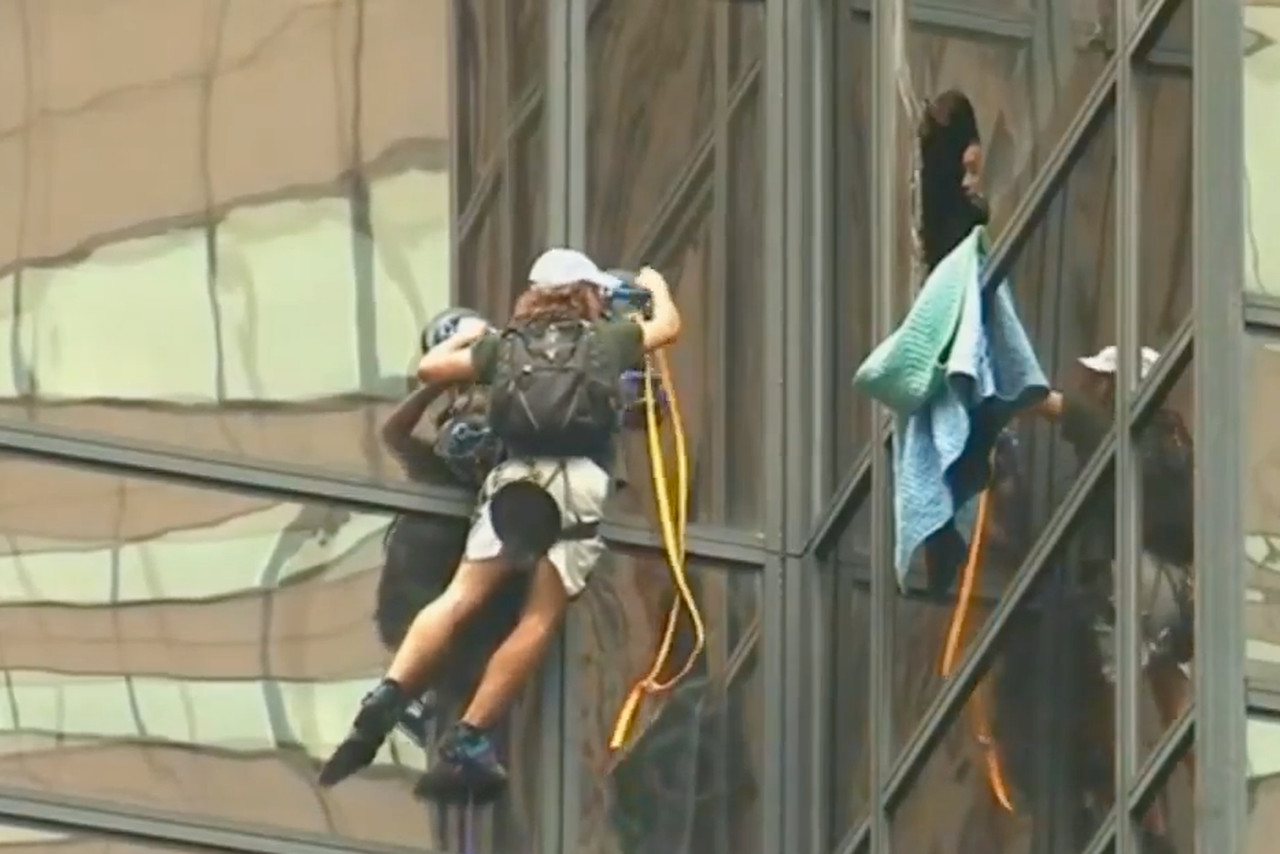 And now allow me to transition seamlessly into New Comic Book Day! Huzzah! Welcome to the best day of the week. We’re ever so closer to the weekend and we now have a gaggle  of new books to choose from. What could be better? Well, free comic books. Free comic books would be better but beggars can’t be choosers I suppose.

There are a number of books not getting the pimp spots this week because I am your comic overlord and choose the books I wish to promote for my own nefarious purposes. That’s not exactly true. I choose books because they look and/or sound awesome and I want you to relish in said awesome (that sounded way dirtier than intended). That doesn’t mean I can’t mention some of the other books that I’ll be omitting. For example you should probably be reading this weeks Flash and Superwoman as well as the Civil War II tie in of All New All Different Avengers and Black Panther. While you’re at it why not give Action Comics a bit of a look see too.

So many comics, so little time. *sigh* 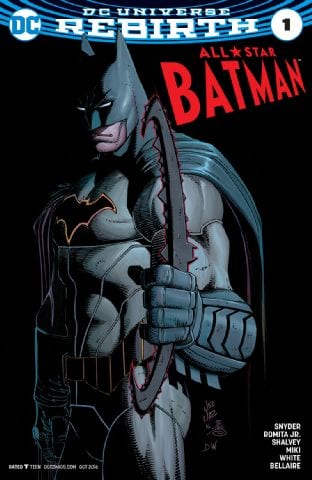 1. All Star Batman #1– In the grand scheme of things, Scott Snyder has only been a way from Batman books for a few months. In the dark, geeky, burrows of my mind he’s been gone for-ev-er. Finally the wait is over as Snyder returns to the world of Batman with a new series which will allow him to explore a number of different Batman villains, like Two-Face for instance. This first story arc will be a crazy, cross country road trip that plays off like Mad Max: Fury Road as Bats and Two-Face are pursued by a number of different problems. Mainly things that want them dead. Snyder has described his run on All Star Batman is what he hopes to be his Long Halloween, and if you weren’t excited enough about Snyder’s return he says something like that. I’ll be curious to see how the narrative differs from his previous work with Bats but mostly I’m just thankful to be living in a world where he’s writing Batman stories again. Oh, as a side note, some small artist named John Romita Jr is doing the artwork in this issue. No big deal. 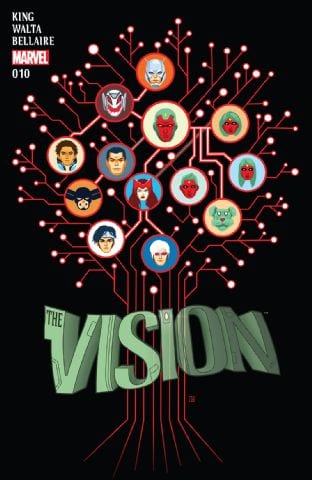 2. The Vision #10– Oh. My. Sweet. Baby. Jesus. This book is good. Not good. Amazing. This book is incredible. Ugh I love this book. Love it. Like I want to breed it and make other comics that are just as good as it because the DNA of The Vision runs through them. Yeah some mad scientist type comic stuff (bet you didn’t know that was a thing. Either did I until I typed it). Any way I’ve been binging this book hard, and am still an issue away from #10, but what I can tell you is what Tom King has created here is nothing short of breath taking and brilliant. A family of synthetic robots move into a suburban Washington DC community trying to project what they think is normal with a community who fears them because they don’t understand them. What follows is a dark, philosophical, brooding, Breaking Bad like, study of family, love, loyalty, society, projections of what it means to be normal, and fear. This is the best comic I’ve read in quite some time, and can’t help but think of Matt Fraction’s run on Hawkeye. Not because of the content but because of the genius in story telling. Read this book and then tell me how right I am. 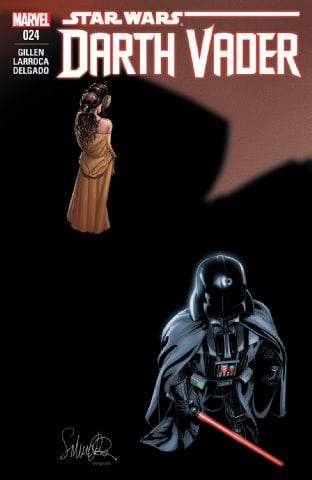 3. Darth Vader #24– Take a minute and look at this cover and marvel (see what I did there?) at the emotions it stirs. For starters, we have now reached a place where we can admit that the prequels… they weren’t so good (you think?). But seeing Padme on the cover here does stir those emotions and feels. While the prequels did their best to neuter Darth Vader this comic has done it’s best to re-establish him as the badass we remember. With only one issue left before it concludes it’s run, Vader finds himself trapped in his mind where he’s got some demons to wrestle with. Living in a world where he believes he’s killed his wife as he transitioned deeper into the dark side has obviously haunted Vader and it’ll be interesting in seeing him wrestle with Anakin’s emotions and Vader’s coldness. As long as Darth doesn’t scream “NoooooOOOOoooOOooOOOOoooo” I’ll deem this comic as a success. 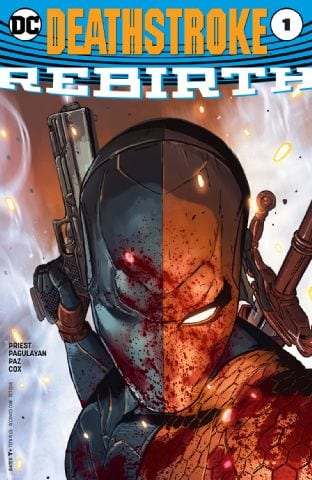 4. Deathstroke Rebirth #1– This is another pretty gnarly cover. Deathstroke has always been one of the DC universe’s biggest badasses, and I was surprised that he didn’t show up in some capacity in Suicide Squad (do you guys remember there were rumors that he would?). Well fear not fans of Captain One Eye he’s got his own Rebirth book for you to read it and it’s filled with all the mercenary, ass kickery you would expect from a Deathstroke book. Darth Vader isn’t your only book this week with an anti-hero, but unlike the Sith lord there will be no light saber wielding. Would you guys stick around for swords? Of course you will. 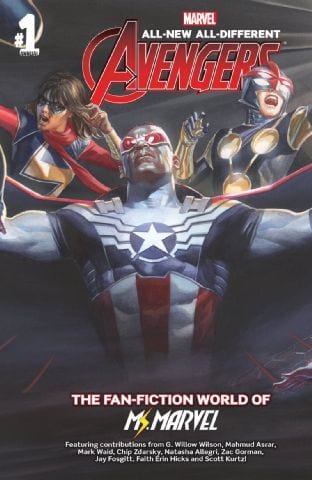 5. All New All Different Avengers Annual #1– As a general rule I tend not to like Annuals. For starters they usually don’t progress current story lines and are often times excuses to hike the prices up on books. Unless I hear that something insane is going down I tend to pass on them. In the case of All New All Different Avengers my curiosity is peaked. Ever since she was introduced I have fallen in love with everything about the Kamala Khan/Ms. Marvel character. She has been wonderfully crafted and is proof that Marvel is still able to create new star heroes. One of the things I dug the most about her character is how much of a fangirl she is, and even spends time writing Avengers fan fiction. Well, for those of us who have often wondered what that would be like to read this fiction, look no further. This annual will cover a number of different Ms. Marvel fan fiction stories from a number of different writers and artists. The uniqueness of the issue is enough for me to shell down my hard earned adult dollars.

There you have it Geeklings! Another week another Pull List. As always if I left something out that you think people should be reading then hit me up in the comments. If not, fine, be that way. Just keep your awesome reading selection to yourselves. In the mean time let’s try and make it another week without new comic books.

Fear not. I’ll be back next week to do this all over again. (Author’s Note: For those of you wondering, yes a part of me died using that gif… mourn for me Geeklings. Mourn)