I woke up this morning on a mission Geeklings. You see, over the last three months or so I’ve been waking up and doing the exercise thing trying to get myself healthy (lost 22 lbs too, what whaaaaaat), and have developed quite the schedule. I walk for about twenty minutes to a half hour, go home, and then get ready for work. But today was a bit different. Today I needed to make sure I got my walk done with enough time to get home and read the newest issue of Civil War II. In case you were wondering this left me no time to hunt for Pokemon #thestruggleisreal I have this thing Geeklings where I refuse to have the interwebs spoil things for me (even if it’s accidental), and rumors were strong that there were big to thangs in this issue. Once the issue was complete I would have full reign over the interwebs for the day otherwise I’d have to avoid it like Jabba avoids the salad bar (zing!). Have you ever had to try and avoid the interwebs? Uggggh, it’s the worse. Lucky for me my mission was a success!

It’s never my intention to start the excitement of New Comic Book Day with a little pressure, but hey, it all worked out in the end. And with that being said, what do you say we break down some books for your eyeholes? It’s Wednesday and I feel like talking comics. 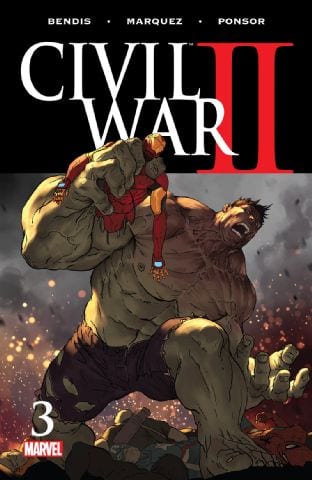 1. Civil War II #3– I guess some would argue that this is the most important book on the shelf this week, and I guess those people would have valid points. Don’t worry, I don’t plan on giving away any spoilers but everything you heard about someone dying is correct. And it comes as a bit of a shocker. While I think this event would be better under a different name (the shadow of the original Civil War looms large) this was probably the best issue of the series thus far. Some clear division is still needed (and maybe a little more action? This is a super hero comic after all) but I feel that maybe we’re heading in the right direction. The art in this series continues to be the strongest attribute as panels just ooze off the screen but now I’m just waiting for the part in the story where there is no turning back. Maybe issue four? One could hope. Civil War II still has my attention even if it’s only to see where this thing is heading. 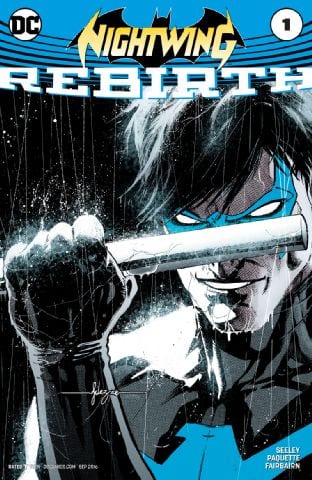 1. Nightwing Rebirth– Welcome back Nightwing! It’s been a rocky road getting here but it seems that Nightwing is back for good now. Don’t get me wrong the Grayson book was solid but it missed the feels of being a Nightwing book. I think the DC universe has missed Dick Grayson and Rebirth is the perfect opportunity to bring him back, much to the joy of his fandom. Now what does that mean for the character? Well we know that he’ll be a part of the Titans book and on the quest for Dr. Manhattan, not to mention having Wally West back in his life, and maybe some Gotham city and a dash of Batman? Either way it’ll be good to read a Nightwing book that feels like a Nightwing book. 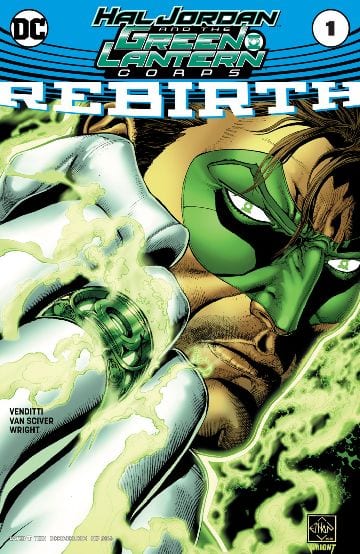 3. Hal Jordan and the Green Lantern Corp Rebirth #1 (or the longest comic book title ever)- It’s hard to be a Green Lantern Corp when there is only one member of said corp, but damn it is Hal Jordan going to give it his best. With a whole squad of Yellow Lanterns seemingly have their run on the galaxy one can imagine that Hal is going to have something for everyone’s favorite pencil thin mustached villain. The landscape of the Green Lanterns has changed dramatically with Rebirth and the Darkseid event, and it will be interesting to see how Hal Jordan adjusts to this new status quo. 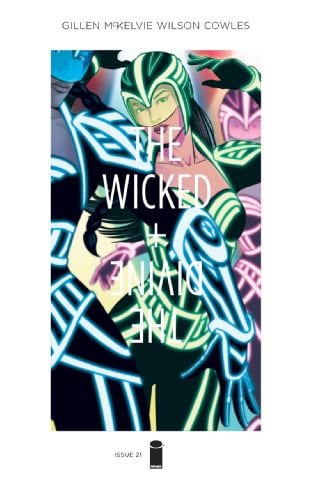 4. The Wicked + Divine– What happens when reincarnated gods take over the bodies of people and become celebrities? This book happens. This book happens hard. Wicked + Divine is one of the best books on the shelf and has yet to put out a bad issue. The characters are compelling, the mythology is engaging, and the art dances on your eyes. Well worth your time. 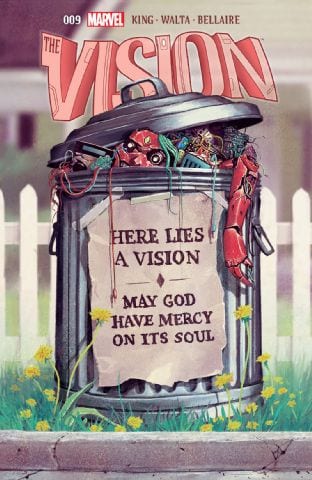 5. The Vision #9– Speaking of consistently good books…. hello The Vision. I don’t think anyone expected this series to be as good as it has been but it has been both compelling and wonderfully crafted. Don’t think of the Vision from All New All Different Avengers because this is something different. This book is full of heart and falls in line with books like Black Panther that need to be on your pull lists because it’s tackling important themes. There is a darkness to this book as we explore what it means to be human and trying to leave a better world for your children. A responsibility that becomes even greater when you’re a super hero. The Vision needs to be on your list. Thank me later

There we go Geeklings! There are tons of other books out there this week such as new issues of The Flash, Guardians of the Galaxy, Superman, and Daredevil (Spider-Man shows up in this one ya’ll) so don’t limit yourselves to my suggestions. As always if you have other books you think I should be reading by all means leave them in the comments. I’ll scoop them and bury my eyeholes in them. See everyone next week!