Nintendo will be heading out on the road to bring the Nintendo Switch to various towns this Summer and Fall.

Nintendo has announced plans to bring the Nintendo Switch, along with photo opportunities and various activities, on the road between June 26th and early October. Nintendo has stated that they plan to “offer visitors a colorful and highly interactive space featuring demos of some of the hottest Nintendo Switch games of the summer like Super Mario Maker 2 and Super Smash Bros. Ultimate.”

“The stops throughout the road trip are designed with kids and families in mind, offering them a one-of-a-kind Nintendo-themed experience that they can enjoy together,” stated a Nintendo press release. 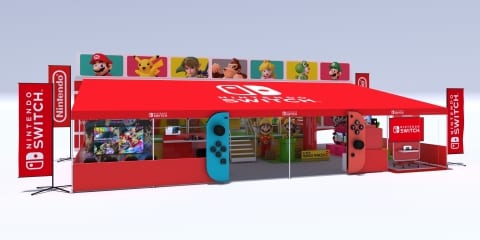 Nick Chavez, Nintendo of America’s Senior Vice President of Sales and Marketing, stated, “The Nintendo Switch Road Trip highlights the portability of Nintendo Switch as we travel the country to bring our games directly to fans. Whether you’re visiting a state fair or just out for a day with the family, our event provides an opportunity to relax, play some games and have some fun.”

The traveling Nintendo Switch vehicle will offer individual spaces for various games, including a warp pipe filled stage for Super Mario Maker 2, a neon-colored paradise for Splatoon 2, and a large TV and bucket race car seats for Mario Kart 8 Deluxe.

Social media will be a big draw at each stop, with Nintendo providing ample opportunities for fun photos. Nintendo-themed challenges and discount coupons to retailers like Target will also be available at each stop will supplies last.

Below is the list of Nintendo Switch Road Trip scheduled stops:

Games playable during the Nintendo Switch Road Trip are:

Visitors who have a My Nintendo account can check in at each Road Trip stop using their My Nintendo QR Code and receive a gift, while supplies last.

Will you be checking out any of the Nintendo Switch Road Trip stops? Let us know in the comments!

Home » Video Games » The Nintendo Switch Road Trip Is Heading To A Town Near You!