After watching Jurassic Park for the first time, I’m sure we all envisioned a world where dinosaurs roamed around. Well, this new AR game is going to fulfill our childhood wishes.

Thanks to Universal and Ludia, players will soon be able to experience what it’s like to see dinosaurs in real life with the new game, Jurassic World Alive. This game brings the dinosaurs to life without all of the mayhem and destruction.

This game is very similar to Pokémon Go in that players will be able to spy and interact with dinosaurs in their immediate area. Unlike Pokémon Go,  players will have a “stay at home” feature. They can send drones out to collect dinosaur DNA to unlock more dinosaurs. Players can even combine the DNA of different dinosaurs to create hybrids. 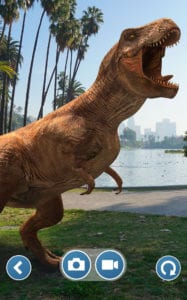 “There’s definitely that element of discovery, but we wanted to make it a little more flexible and also give you something to do at home,” says Universal’s executive vice president of games, Chris Heatherly. Ludia CEO Alex Thabet adds that “there’s a major focus in this game on the hybrids and super hybrids to create this almost infinite matrix of possibilities.”

This game will also let players interact with other players as another difference between the games.

The game will regularly add more dinosaurs for players to unlock, although over 100 dinosaurs will be available to players upon launch. The new dinosaurs will include familiar one, from the movies, along with the special hybrid creatures. 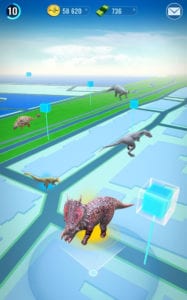 “We really see this game as the future of the Jurassic World franchise on mobile,” says Heatherly. “This is really the first time that we have allowed you to take the dinosaurs off the island and out of our storytelling world, and into your real world.”