The weekend is here and you have sent the children away to grandmother’s house. Your spouse is away on a business trip and you canceled your plans with friends because you are not “feeling” well. They will never understand your choice in movies. They would want to watch “The Notebook” or “The Help” but not you. You have a unique taste in movies that you cannot share because people just do not understand. It is ok to admit it to yourself and to the world you love BAD movies. The movies the critics and most of the moviegoers hated but not YOU, no you fell in love and will watch it every chance you can even if you must watch it alone, in the dark with no one around. So, you curl up under your blanket, with popcorn and wine and enjoy without judgment. Well, there is NO judgment here dear reader. You must do YOU when it comes to your favorite movies and here is another one of mine.

‘The Monster Squad’: The world of horror comedy was forever changed in 1987 when ‘The Monster Squad’ hit the box office. This is one of those movies that didn’t have rave reviews from the critics but it became a cult classic for those of my generation. I passed on that love of the movie to my children and someday to my grandchildren. I mean it is like ‘The Goonies’ just with monsters how can you not like that?

For those who have never seen ‘The Monster Squad’ is centered around a group of teenage boys who are obsessed with monsters. So, they all meet in a tree-house and discuss monsters in depth and I know this is shocking but they actually talked to each other. Of course, this was before cell phones and Facebook so there were no other options but to talk to each other. 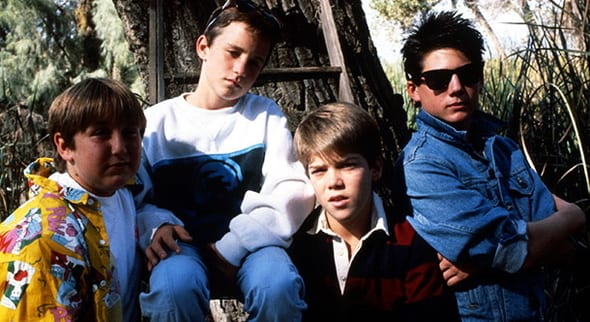 Life is normal for the Monster Squad until Sean’s (Andre Grower) mother gives him the diary of the legendary hunter Van Helsing (Jack Gwillim). The diary is written in German and the only person they can think of to interrupt it for them is the “Scary German Guy” (Leonardo Cimino).

However, what they don’t realize is that Count Dracula(Duncan Regehr) has come to collect the diary so that once he finds the amulet buried beneath a house and hidden from him by Van Helsing he then can plunge the world into darkness forever. Dracula builds is own personal army of monsters The Gill-Man (Tom Woodruff Jr.), The Mummy (Michael MacKay) Wolf Man (Carl Thibault) and Frankenstein’s Monster (Tom Noonan).

The Monster Squad suit up for a war they have been preparing for their entire lives. Sean (Grower) along with Patrick (Robby Kiger), Horace aka “Fat Kid” (Brent Chalem), Rudy (Ryan Lambert) Eugene (Michael Faustino) and Sean’s little sister Phoebe (Ashley Bank) face off against Dracula and his army however they learn that Frankenstein’s Monster is not really monster the legends portrayed him to be.

With the help of the scary German guy, a virgin, Frankenstein’s Monster, and a well-placed kick to Wolf Man’s Nards (Yes Wolf Man has Nards!) the Monster Squad prevails and all is right with the world again.

Monster Squad turned 30 years old on August 14th and even though the box office numbers were low it does have a cult following that keeps growing throughout the years.