Growing up, I was always taught: you can’t judge a book by its cover. But, when that cover reads: The Man Who Killed Hitler and Then The Bigfoot…it’s kind of hard not to. For a film title as bold as this one (spoiling itself in its own title), it’s quite easy going into it with high expectations for the two key events teased in the title. Not only does the title promise some pretty major events throughout its runtime, the legendary Sam Elliott plays the lead role of Calvin Barr, a grizzled veteran and American hero. 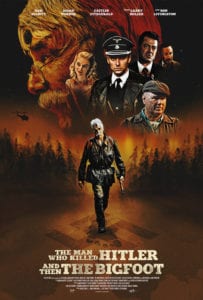 THE MAN WHO KILLED HITLER AND THEN THE BIGFOOT follows the epic adventures of an American legend that no one has ever heard of.  Since WWII, Calvin Barr (Elliott) has lived with the secret that he was responsible for the assassination of Adolf Hitler. Now, decades later, the US government has called on him again for a new top-secret mission. Bigfoot has been living deep in the Canadian wilderness and is carrying a deadly plague that is now threatening to spread to the general population. Relying on the same skills that he honed during the war, Calvin must set out to save the free world yet again.

From the opening minutes, the vision of director Robert D. Krzykowski is very clear as we see Calvin Barr get into a scuffle with some local thugs all set to ‘Use Me’ by Bill Withers. It is important to note that this is a film that must be leaned into to fully enjoy. While there is a bit of campy needs when there needs to be; overall this is a story of what it means to be an American Hero and the pressures that come along with that. A key reason why I loved this film as much as I did, is because it really shared similarities with ‘First Man‘ in that Neil Armstrong was viewed as an American Hero, but, in all honesty he was a tortured soul looking for hope and redemption beyond our planet.

Sitting at a brisk 98 minutes, the film wastes zero time in its setup and execution of the teased events. The film is beautifully shot by cinematographer Alex Vendler with a retro, yet cinematic score by Joe Kraemer. Sam Elliott has always been quite the powerhouse of a performer, but, this has to be one of his best performances to date. With a film this wild and unique, it would be easy to play Calvin Barr with a wackiness; but, Sam Elliott chooses to play him with a more meditative approach that makes this film more of a character study than a campy B-movie. I must say I am usually quite picky when it comes to the representation of Bigfoot on film; but, I bought into the creature design due to how Bigfoot was represented in the ‘world’ this film created.

While going too deep in detail about the scenes in this film would be ruining the magic quite a bit, I can say that as long as you’re all-in on the seemingly bizarre premise, you will walk away enjoying every piece of this film. If you’re a fan of Elliott’s work, this is a must-see and if you’re looking for something original, entertaining and profound when it needs to be: this is the film for you! The events teased in the title might not be front and center (as they only take up about 30 minutes of the 98 minute run-time) but, it just reminds us not to judge a book by its cover. The Man Who Killed Hitler And Then The Bigfoot is more than just the sum of its parts. It is a meditative film that exceeds its promise, and one that should hold up over time as a good ‘ol American classic. I highly recommend you check this film out (preferably on the big screen) when it releases this week!

The Man Who Killed Hitler And Then The Bigfoot releases IN THEATERS and ON DEMAND/DIGITAL: February 9th, 2019.

Home » Featured » ‘The Man Who Killed Hitler And Then The Bigfoot’ Review: A Meditative Film That Exceeds It’s Promise