Netflix’s most popular series is back — and boy, does the Stranger Things season four premiere leave you hanging with your head on the floor.

There’s a lot to take in with this episode, which runs over an hour. Here’s what you missed from season four’s premiere of Stranger Things, “The Hellfire Club.”

Unlike the other girls, Eleven is unlike any other.

The ep begins with a flashback to the testing facility where Eleven (Millie Bobby Brown) grew up. Dr. Martin Brenner (Matthew Modine) is conducting one of the other children’s telepathic abilities. The kid then claims he hears the other kids screaming. In the facility, Eleven murders all of the other children and scientists but Dr. Brenner in the facility. It’s a really distressing scene and sets the tone for some of the later parts of the episode and perhaps even the rest of the season. We next cut to Eleven and Will in the present day 8 years later, when they are attempting to adjust to their new life in California. It’s been nearly 200 days since they last saw each other, but the pair are looking forward to seeing each other again when Mike comes up for a week while they’re on Spring break.

Eleven writes Mike a letter informing him that she has to prepare a presentation for school on a historical figure. She decides to present hers on her “dad” Hopper (David Harbour), who is still missing. To bring everything together, Eleven makes a lovely diorama of their cabin in the woods from season two – almost certain to be turned into into legitimate merch by the time the season finishes. Hurray for capitalism!

When her presentation is ruined by her rival, Angela (Elodie Grace Orkin), who trips her after class while she’s holding up her diorama, things take a dark turn. Eleven becomes enraged when she remembers that she lost the use of her telepathic abilities at the conclusion of season three. So Eleven comes up with plan B: screaming at Angela in public, making the other kids at school laugh at her more and permanently painting Eleven as the quirky, weird one. Poor girl. She runs away in tears to Kate Bush’s “Running Up That Hill” because telepathy is basically like magic.

After that terrible season four premiere, it’s probably for the best if Eleven didn’t have her abilities.

Joyce receives a fiery present from abroad, which she destroys.

Joyce, the world’s most superstitious mum, provides 2020 energy and begins a new job working from home. She then receives a strangely packaged object covered in Soviet Union stamps. From an unknown individual, she gets a frightening crimson wooden babushka doll. If I had a dollar…

She gets Murray (Brett Gelman) on the phone, thinking it’s a Russian or Hopper threat. She thinks it’s a message from Hopper because of its resemblance to her doll. Murray advises her to smash the doll open because it might be bugged with a hidden microphone. 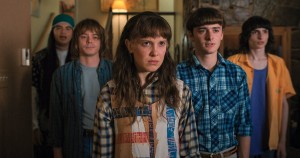 She pours a bucket of paint on it and discovers a riddle that gives off serial killer artwork project vibes.

When her presentation is ruined by her rival, Angela (Elodie Grace Orkin), who trips her after class while she’s holding up her diorama, things take a dark turn. Eleven becomes enraged when she remembers that she lost the use of her telepathic abilities at the conclusion of season three. So Eleven comes up with plan B:Joe Keery) tells Robin he’s certain Robin has a shot and Vickie’s queer because she paused a show at the exact same time as them to see some “boobies”. Thanks, Steve. Appreciate your input, bud.

Will has been acting strangely, according to Eleven’s letter to Mike. In her note, Eleven claims Will wants a female at school, but we see him physically recoil when a girl in his class rubs her feet against his. 11 also states that Will has been working on something in his room and refuses to show it to her. I hope it.

At school, Mike, Dustin, and Lucas are members of the Hellfire Club, a metal Dungeons & Dragons club. It’s a sick club controlled by gorgeously chaotic senior student and dungeon master Eddie (Joseph Quinn). They even have t-shirts! Drop the link, kings; I’ll need one for Halloween this year.

The Hellfire Club is having a meeting after school. Lucas, who now plays for the school’s basketball team, wants to bail on them in order to participate in the Basketball Championships and climb the social ladder at school. So Mike and Dustin look for someone to replace him while turning to his 11-year-old sassy sis Erica (Priah Ferguson). She tells the party she’s an experienced player — a level 14 chaotic good, half-elf rogue to be precise.

On the court, Lucas dribbles a couple of balls while the group battles one-eyed bad guy. Robin (Maya Hawke) is a member of the school’s marching band and is there crushes on Vickie.

Steve (Joe Keery) is also there for Robin as her wingman. He introduces a new lady he’s dating, but immediately regrets bringing her when he finds out they have nothing in common.

Don’t use drugs, children, or you’ll end up in Hell and meet the slippery Boogieman.

After witnessing her brother become possessed and stabbed by a demon tentacle in the new issue of *pretends to be shocked*, Max isn’t doing very well. She’s flunking school, avoiding her school counselor and friends, and splitting up with Lucas. Her mother is working two jobs while drinking excessively at home.

However, Max still has a good heart. She overhears new character and head cheerleader Chrissy (Grace Van Dien) vomiting in the school restrooms, and she asks if she’s all right. Chrissy explains that she is fine and invites her to leave. As the voice of her mother calls for her aggressively from outside the cubicle door.

She goes to the woods near school in order to purchase some unusual thing from Eddie, but she quickly determines that she’s mad. During her wait, however, she discovers a damaged clock in a tree. The alarm sounds, and a pack of black spiders bursts out of the crack in the clock glass.

Following the narrative, she returns home with Eddie, who resides in a caravan park adjacent to Max’s. She has a vision of her mother and sees her sewing machine. However, when she approaches her, she finds that her mouth and eyes have been brutally sewn shut. We know who isn’t winning this week’s sewing challenge on All Stars 7

In the dining room, she discovers her father sewn to the sofa, having met a similar fate as his mother. A human-looking figure slowly pursues Chrissy. We don’t know his name, so I’m going to call him slimy Spider-Boogieman for now. Chrissy flees to the dining room and finds more

Then we cut back to reality, where Eddie is freaking out. Before giving her anything, Chrissy was standing there unconscious with blinking eyes. Spider-Boogieman then kills her in the Upside Down by smashing her real body against the ceiling and shattering her bones. Her eyes pop out of her skull and her bones crack backward.

Netflix has released Stranger Things, the new Netflix series based on a hit 1980s horror book by Stephen King. The first seven episodes of the second season are now available; the final two eps will be published on Friday, July 1st.