Things get dark in the seventh installment of The Haunting of Bly Manor, so strap in and prepare for spoilers below.

In flashbacks, we revisit Peter Quint (Oliver Jackson-Cohen) dealing with his existence after death, toying around with navigating the manor as a ghost. He learns that he’s capable of possessing Miles, but for only a short period of time. In a throwback to earlier in the season, we learn that one can become possessed permanently if they are invited by the living.

Peter also learns a disturbing fact about the ghosts who reside at Bly Manor: they cannot leave the grounds, nor will they last forever. Over time their face will fade away along with their memory, becoming a shell of what they once were.

Fueled with fear from his newfound knowledge of the afterlife at Bly, Peter visits Rebecca Jessel (Tahira Sharif)who is angry at him for disappearing. Peter demonstrates to Rebecca that he is a ghost and then swiftly begins trying to convince her they can be together forever if she invites him to possess her.

For some reason, Rebecca agrees to this and makes the invitation. With Peter in control of her body, Rebecca is locked away within her memories and is unaware of what Peter is up to. With Peter in charge, he walks into the lake and allows Rebecca to drown.

Returning as a ghost, Rebecca is flabbergasted and furious with Peter, who begins to let her in on his ultimate plan. Unbelievably, and because all of Peter’s other plans have panned out so well thus far, Rebecca is convinced and agrees to participate.

A Truth and a Lie

In the present, we pick up where the previous episode left off. When Dani comes to, she finds she has been bound and gagged and brought to the attic. Peter and Rebecca are instructing Flora and Miles that the time has come to go through with “the plan”. Miles and Flora invite the ghostly pair to possess their bodies. This time permanently.

Hannah Grose (N’Kia Miller) nearly interrupts the group but Peter, dressed as Miles, intervenes and directs her into the gardens. He leads her to the well where he killed her, and forces her to look down into the well. Unable to deny the truth any longer Hannah finally begins to accept that she has died. 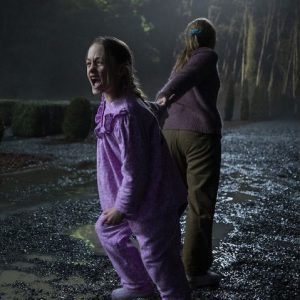 Meanwhile, in the attic, Flora reveals to Dani that she and Rebecca only pretended to carry out the possession. Rebecca explains that it’s too late to save Miles and implores them to escape while they still can. They untie Dani and she and Flora flee from the manor. They’re nearly free when Dani finds herself in the pathway of the Lady in the Lake. The episode closes with a ghostly hand around Dani’s neck.

The next episode finally answers the question: who is the Lady in the Lake? Stay tuned for our continuing coverage of The Haunting of Bly Manor.

Austen Miles is a husband, father, and writer. He can be found on Twitter: @austen_miles, and on Instagram: austenmiles.

Home » Netflix » The Haunting of Bly Manor: The Lady in the Lake Returns