With his endlessly conflicted moral philosophy professor Chidi, Jack Harper is one of the show’s best elements. Since The Good Place ended, he’s been in Love Life and The Resort, but like many other famous people, many are vying to cast him as a superhero.

Fans have been lobbying for Harper to play Reed Richards in the Marvel Cinematic Universe, but he has stated that while he would be honored to be considered, his ideal superhero is considerably less famous. 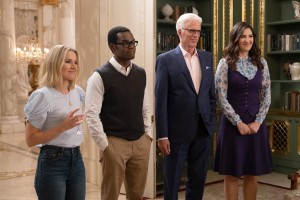 According to an interview with ComicBook.com, he said:

“There was this comic I did read when I was, I want to say like early middle school, called ShadowHawk that I liked a lot, and it was dark as hell. And I really, really enjoyed it. Look, I’m down to get involved with any of those things, but it’s like, that’s up to those people making those decisions. It’s certainly not the internet. But yeah, I think ShadowHawk would probably be the one that I’m really into.”

ShadowHawk is a superhero identity used by Paul Johnstone, a young black man from Harlem, who debuted in Image Comics in 1992. He was successful academically before becoming a successful lawyer, but he refused to kowtow to extortion and was beaten and injected with HIV-infected blood The shame of being HIV-positive prompted him to lose his job, and he vowed to devote his life to delivering violent punishment on those who prey on the weak. Paul was fortunate in that an acquaintance had created an exoskeleton armor that fit him perfectly, giving birth to ShadowHawk.

Since the ’90s, ShadowHawk has been resurrected a few times. Although it is undoubtedly a D-List superhero, he has seen better days. But it’s worth noting that whether or not a hero’s popularity translates to box office success isn’t always linked. Get the proper screenplay and director, and ShadowHawk might be a monster hit – and if it did happen we think William Jackson Harper would be great casting for a talented lawyer driven to vigilante justice.