Spoiler alert!  The following article contains spoilers from the latest episode of The Good Doctor.  If you haven’t watched the episode Islands Part One yet, read on at your own risk!

The Good Doctor is officially back and Monday night’s new episode delivered a new side of the St. Bonaventure staff that we’ve never seen before.  Being that the surgical team is down two doctors at the moment, Dr. Claire Browne and Dr. Neil Melendez (who are working together wonderfully, by the way) along with Dr. Andrews and Dr. Glassman are all still at the hospital keeping things going.  Dr. Jared Kalu has been fired for assaulting the doctor who was making inappropriate advances towards Claire.  Last, but certainly not least, Dr. Shaun Murphy has gone AWOL since his altercation with Dr. Glassman.

The episode begins exactly where we left off in December.  Dr. Glassman is searching for Shaun.  He barges into Lea’s apartment, expecting to find Shaun there but, he’s nowhere to be found.  After Dr. Glassman leaves, Shaun’s killer hiding-place is revealed.  He and Lea have a little chat and she convinces him to join her on a road trip to de-stress.  Shaun somewhat reluctantly agrees and they set out for the adventure of Shaun’s lifetime.  We’ll get back to this in a minute.  First, let’s discuss everything going on back at the hospital.

At St. Bonaventure, Dr. Andrews recruits Dr. Melendez and Claire to assist on a delicate case involving conjoined twins.  The twins, Katie and Jenny Kunkler, are in desperate need of a kidney transplant and also separation surgery.  The surgical staff is forced to move up the separation surgery by six-months due to unexpected complications impacting the transplant surgery.  Katie and Jenny are absolutely adorable and charming and thanks to Claire’s awesome communication skills, their mother agrees to the surgery.  It was nice to see Claire step into the spotlight a bit more in this case.

The surgery appears to have gone well.  Their mother is in the room with the twins who are still unconscious from their surgery.  When their mother asks when they can be expected to wake up, Dr. Melendez reveals that they should already be awake.  He is clearly concerned and, unfortunately, that’s all the information we got from their first episode.  We will surely find out their fate in the next episode.  Fingers crossed everything works out! 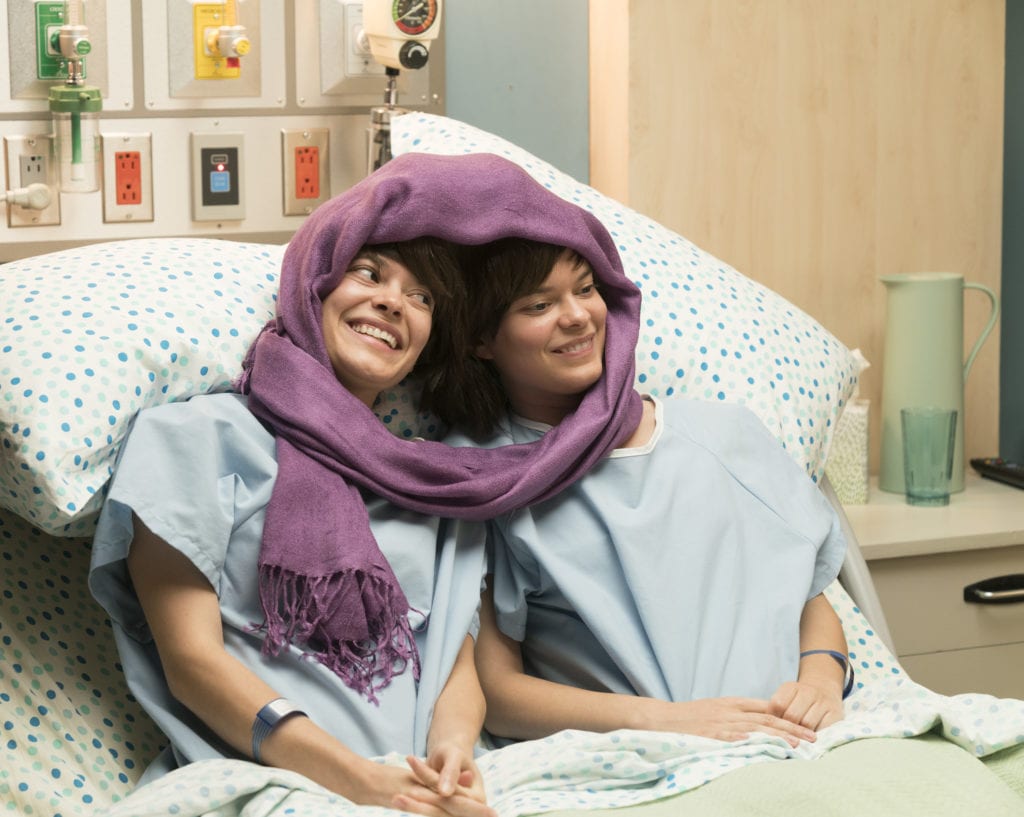 Also at the hospital, Dr. Glassman is covering for Shaun in his absence.  When Dr. Andrews and Dr. Melendez begin asking questions about Shaun’s whereabouts, Dr. Glassman simply says he’s taking some personal time.  Meanwhile, Dr. Glassman has been calling Shaun’s cell phone and leaving him messages expressing his concern – messages which Shaun has completely ignored.  This is the most shaken that we’ve seen Dr. Glassman yet.  He truly cares for Shaun and it’s clear he only wants what’s best for him.

Dr. Melendez struggles throughout the episode over the fact that his fiancee Jessica doesn’t want children.  He’s not sure if he can accept that but, by the end of the episode, decides that he can sacrifice being a parent in order to be with her.  Can he actually put aside his want to be a parent for Jessica? We’ll see about that.

Poor Jared is still fired despite Claire’s attempts to get him reinstated.  She even confronted Dr. Coyle about his actions and basically threatened him.  She said that he needs to tell Dr. Andrews to reinstate Jared or she will go public with what he did to her (and probably dozens of other women in the hospital as well).  While Dr. Coyle complies, Dr. Andrews is still sticking firm to his decision to fire Jared.

And now, back to Shaun and Lea on the open road!  I think I might be the only fan of this show who isn’t totally smitten with these two as a couple.  I’ve had my doubts and my reservations since that little crush started to develop and, I don’t think this road trip was a good idea.

It all starts out innocent enough.  The two set out together and Lea promised to show Shaun the time of his life.  They speed down the road and, at first, Shaun was loving it!

The two got a chance to connect on a totally different level and Shaun even opened up and shared the story of his brother’s death with Lea.  No doubt, this was a HUGE step forward for Shaun.  It shows that he clearly trusts her, probably more than anyone else we’ve seen him interact with.

Lea let Shaun get behind the wheel and this is where things started to go downhill.  She taught him about burning rubber which led to a nervous Shaun almost crashing the car into a telephone pole.  As he began to melt down afterward, Lea was able to calm him.  First crisis averted (for now).

Later on in the day, Lea took Shaun to a bar where he discovered the wonders that is tequila.  He took his first shot and, he even liked it!

As with any night of drinking tequila, this leads to more drinking and eventually, karaoke.  I have to admit, Lea and Shaun singing Islands in the Stream was adorable!  However, it’s what happened after all of this that has me worried.

At the end of the night, Lea and Shaun head back home where Lea tells him that every date ends with a good night kiss.  She asks him to kiss her and he does.  Shaun is clearly happy that this happened however, the tequila is about to get its revenge!  He ends up running into the house and gets sick from drinking.

The next morning, Shaun is concerned that Lea won’t want to kiss him again because he got sick.  She assures him that she would kiss him again and the two go out for breakfast.  It’s here that Lea sends Shaun’s world into a downward spiral by dropping a bomb on his poor little heart.  Lea tells Shaun that he has inspired her to quit her job and go live her dream.  As such, she is going to be moving from San Jose to Hershey, PA in order to work in her family’s auto body shop.  Shaun is so distraught at this news that he can’t even respond.  He just gets up from the table and leaves the restaurant.

The episode ends with Shaun sitting at a bus stop by himself.  He puts in his headphones and plays some music while waiting for the next bus.  The song he’s playing is one that Lea had played for him in the car during their epic road trip.

We are left with SO many questions. What’s Shaun going to do without Lea?  What’s going to happen to the twins?  How will Shaun handle returning to work and confronting Dr. Glassman?  Can Jared get his job back?  Is Dr. Melendez really ok with not having children?  Luckily for us, next week’s episode is title Islands Part Two so, you can bet all (or most) questions will be answered!

What did you think of the episode?  How did you feel about Lea and Shaun’s road trip?  Let us know your thoughts in the comment section below and be sure to stay tuned for our official preview of next week’s episode coming soon.

Throwback Thursday: A Look Back at the Career of Freddie Highmore