By now we all know that Michael Keaton is returning as Batman in The Flash! The film will see the return of one of the original caped crusaders! Michael Keaton’s Batman suit is seemingly returning!

So, this isn’t 100% confirmed, but we can make some educated guesses based on a recent social media post. The director of the upcoming Flash film posted an interesting picture on Instagram!

Andy Muschietti shared a picture of what appears to be the classic Batman logo on Keaton’s suit! This seems to confirm that Keaton will be wearing his original suit, in some capacity!

It’s completely possible that the suit will also be updated to be a little more modern! Regardless of what they do, we can’t wait to see the end product because we’re sure it’s going to be sick!

More mysterious, are the strange bloodstains on the logo! You’re probably sick of hearing about it, so let us show you instead! We’re gonna put the image below with a link to Muschietti’s Instagram account. Apologies, we’re having trouble embedding Instagram posts. 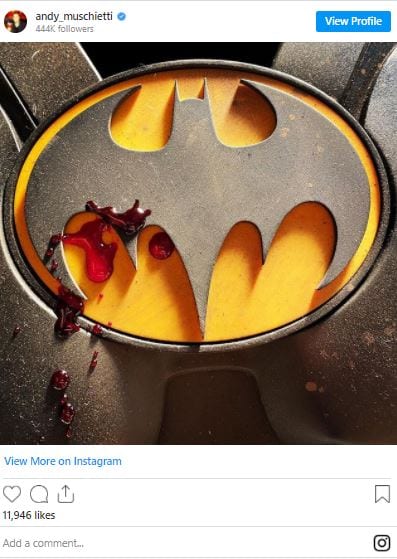 Perhaps the image is hiding some kind of mystery that we won’t be able to decipher until we see the film. We’re incredibly excited to find out that’s for sure! Seeing Keaton meet Ben Affleck is reason enough to tune in for us, regardless!

We’ll also see the introduction of another major DC Character in The Flash Film. Supergirl is set to make her debut in the film, played by Sasha Calle. This will be her first appearance in the DCEU!

The film will mark Affleck‘s last appearance as the Dark Knight, or at least that’s what we’ve been told. We originally thought Justice League was going to be his last appearance, because of everything that was going on. That ended up being not true.

Are you excited about Michael Keaton’s Batman suit? We sure are!

The Flash should release sometime in 2022!