The Flash has had some photos leak from set revealing a first look at Impulse. Impulse will be appearing in an upcoming episode of The Flash. Canada Graphs, one of the biggest spy photographers and is known for stalking the sets of Vancouver television productions posted the pics on Friday.

Jordan Fisher will be setting into the role of Bart Allen A.K.A Impulse. The photo reveals him in full costume, and we must admit the costume looks pretty good. He even has his goggles! The suit looks like a fairly accurate representation of the comic book one. Bart will be Barry’s son on the show as opposed to his grandson, though.

Fisher will be appearing in the 150th episode of The Flash. The same episode will see the return of Jay Garrick and Nora Allen as XS. It’s going to be a veritable speedster team up, and we suspect it’s going to be quite the epic event!

Here’s the picture below! 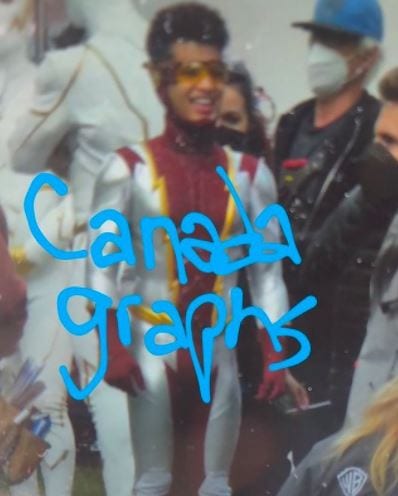 The CW describes Bart Allen like this, quotes below!

BART ALLEN aka IMPULSE (Jordan Fisher): The future son of Barry Allen and Iris West- Allen, Bart is the fastest teenager on the planet! But due to Bart’s penchant for wildly impulsive behavior, stunned parents Barry and Iris will have their hands full trying to teach their new son patience. But it’s a task they’ll have to accomplish, in order for their family to work together and stop Team Flash’s biggest threat yet! Jordan Fisher’s first appearances as the fan-favorite character of Impulse will also coincide with THE FLASH’s special 150th Episode, which airs this season on The CW.

At any rate, the 150th episode of The Flash is shaping up to be a really spectacular affair! We can’t wait to see The Flash‘s 150th episode, and here’s hoping for another 150 episodes!

Did you enjoy the first look at Impulse?!