Peacemaker was one of the best parts of The Suicide Squad, and he’s back soon! John Cena and James Gunn weren’t done with the character quite yet, even if it looked like Peacemaker himself might be done in The Suicide Squad! Check out the first Peacemaker poster, courtesy of James Gunn’s Instagram. This is the first poster we’ve seen for the series!

For a brief time during The Suicide Squad film, it felt like the Peacemaker series might end up being a prequel. It seems like that now won’t be the case, after The Suicide Squad‘s post-credits scene. That scene revealed that Peacemaker was actually alive.

Other than that, very little is known about the show. If it’s anything like The Suicide Squad is it will undoubtedly be excellent. I’m going to post the poster below, and if you want to check out James Gunn’s Instagram, check the link above. We’re having trouble linking Instagram posts right now, but wanted to make sure you know where the photo came from! 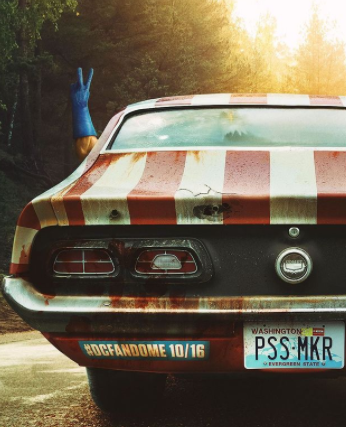 Peacemaker is headed to the DC FanDome, where we will probably learn more about the series! Hell, if we’re lucky maybe we’ll see a trailer drop this October. That would give us a really good look at what to expect when the series drops on HBO Max.

When speaking with Variety about the series last month, Gunn said “Well, through the story, you learn where Peacemaker came from. There’s a moment in the movie where Bloodsport talks about his father and what his father was like, and you cut to a shot of Peacemaker, and Peacemaker nods. That’s the seed of the entire Peacemaker series. So we get to see Peacemaker with his father, who’s played by Robert Patrick, where he came from, what he’s done, what that means to him, and where he’s going after all of this. Because he’s not an evil person, he’s just a bad guy. He seems sort of irredeemable in the film. But I think that there’s more to him. We didn’t get a chance to know him [in The Suicide Squad] in the way we get to know some of the other characters. And so that’s what the whole show is about. I needed eight episodes to do it, at least.”

What did you think of the first Peacemaker poster? Let us know in the comments!