The Falcon And The Winter Soldier aired its most intense episode so far with its fifth episode on Friday. The episode brought us the confrontation we’ve all been waiting for. Sam and Bucky were forced to confront John Walker to take the shield back. The new Captain America didn’t take too kindly to this and fought back. Thankfully our heroes came out on top and took the shield home. The serum that Walker took in order to become a super-soldier was funded by the Power Broker. We don’t know the Power Broker’s identity yet… or do we? John Walker lost his title as Captain America because of his psychotic behavior. After that hearing, he’s approached by a strange woman. She introduces herself and leaves a blank business card. Was that random woman the Power Broker? 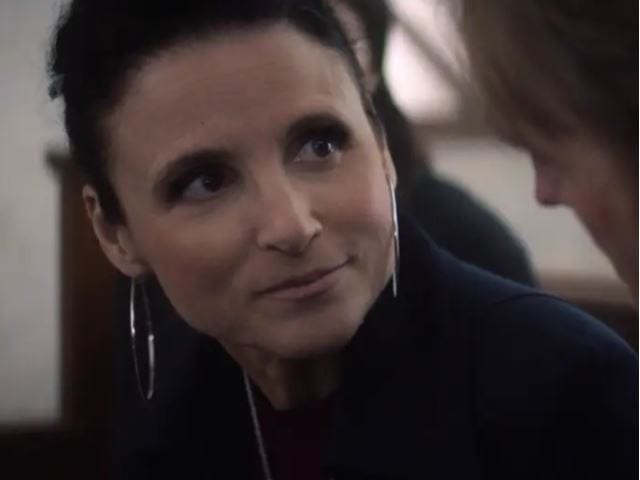 The woman introduced herself as Contessa Valentina ‘Val’ Allegra de Fontaine (Julia Louis-Dreyfus) when giving her card. “You did the right thing taking the serum. Yeah, of course I know about that. And I’ll tell you something: it has made you very, very valuable to certain people,” she tells Walker. “I actually think it was the second-best choice you’ve ever made in your life. You want to know what the first best choice was? Picking up the phone when I call you.” she then ends by revealing a little secret about the Vibranium shield. “It doesn’t really belong to the government. It’s kind of a legal gray area. I’ll be in touch.”

If you’re a huge fan of Marvel Comics then you’ll surely recognize that woman’s long and confusing name. In the comics, she also goes by the moniker of Madame Hydra. See, this character was originally supposed to make her first appearance in Black Widow. Sadly, because of the pandemic, Black Widow has been repeatedly delayed. It should finally be coming out this summer, but only if we pray really hard for it. If the MCU decides to go a different route it’s entirely possible that instead of Madame Hydra she will be The Power Broker.

Do you have any theories of your own? If so I’d love to hear them down below! WAS that random woman the Power Broker!?

The Falcon And The Winter Soldier returns for its finale on April 23rd! Catch it on Disney+!

Home » Disney+ » The Falcon And The Winter Soldier: Was That Random Woman The Power Broker?