By the end of The Falcon And The Winter Soldier Sam was the new Captain America. He’d taken over the mantle and got a brand new costume. He was looking spiffy and became pretty damn proficient with the shield. Now we know that his throwing method was almost very different. Sam almost threw the shield with his wings, which would have been kind of cool! Or it would have looked really silly. It’s up in the air. 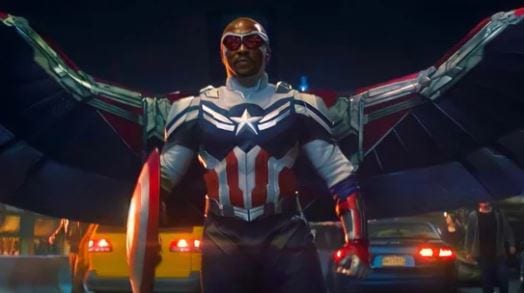 That costume has been discussed a lot since the show’s finale! It was a huge moment, both for us as fans and for the actors, producers, and everyone else involved behind the scenes. It’s been a huge topic on social media, and now Kari Skogland, the director, says “it was thrilling” to see Mackie in the suit for the first time.

The visual effects supervisor, Eric Leven, sat down with ScreenRant to conduct an interview recently. He revealed Sam’s wings were nearly what was used by the new Cap to throw the shield.

“When Captain America is flying around trying to save that helicopter, we were trying to figure out what’s a really cool moment; what’s something cool he could do here to make his character more interesting? What we settled on was he saves the police helicopter pilots on the bridge and he covers himself up. That was something that was added after we’d done the initial previs,” Leven shared.

“But there were a lot of other ideas, like, ‘What if he could do this? What if he saves this? What if he does that?’ So, there were little bits of exploratory things. Early on, we were trying to figure out how to use the wings and the shield together. So, we had a lot of really cool ways, like maybe the wings actually catch the shield and it comes back – or the wings can actually throw the shield,” Leven added. “There were explorations like that. It just happened that for this show, we didn’t have the chance to use that stuff. Maybe that stuff gets used in the future, or maybe not.”

In the interview, Leven spent a large amount of time talking about Sam’s wings.

“Well, it was all about the wings, and it was also about the way that he flies with those wings. We already made a big change to the way Falcon flew in the beginning of the show – because previously, when Falcon flies, he always has his hands on his wings. And we wanted to move away from that, because we’re gonna have so much footage of him in this Iron Cross pose. We wanted to find something a little different,” he explained.

“We use real jet people for reference – guys who actually fly with real jetpacks – and they usually just have their arms at their side. So, we wanted to give Sam the flexibility to fly differently for the beginning of the show. At the end, when he’s Captain America, there’s a different set of wings. We wanted to have different poses for him and how he would balance himself; how comfortable he is with those wings, and also the poses of the wings. How delta wing do they get, or how flexible are they? If they’re too flexible – you don’t wanna have too many S curves, for example, or they start to look like they’re made of raw material,” he added. “So, finding all that stuff out was an interesting journey.”

Can you believe Sam almost threw the shield with his wings? Let us know in the comments!

If you want to see Sam in action you can! Just check out The Falcon And The Winter Soldier on Disney+!

Home » Disney+ » The Falcon And The Winter Soldier: Sam Almost Threw The Shield With His Wings!