The Expanse, which just recently started its third season, has been adored by critics and fans alike since it began its run in 2015. The series is a welcomed culmination of brilliant storytelling amongst a political backdrop with loads of outer space action and adventure. One of the series’ most vital characters, Alex Kamal, the Martian pilot of the Rocinante, is played by Cas Anvar and we got the wonderful chance to speak with him recently to discuss his favorite memories from seasons past, his impressive roster of previous projects, and of course, all things Kamal and season 3 of The Expanse! 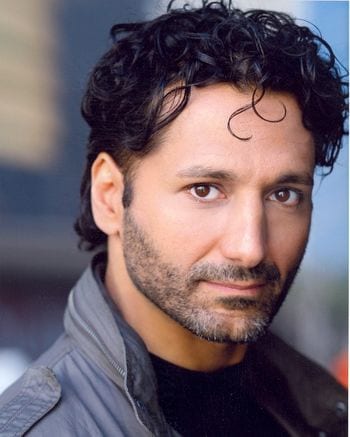 It was during a convention in New York City that led to a serendipitous meeting between sci-fi author Tabitha Lord and Cas. Many thanks to Cas for taking the time to answer a few of her questions for Fan Fest News. Check out the interview below!

FF: How familiar were you, if at all, with the books behind The Expanse?

Cas Anvar: I actually had not read the books before auditioning for the role of Alex, but once I got the part, I began devouring them. I currently read one book per season because I don’t want to get too far ahead, and reading the novel that corresponds to the season I’m about to shoot allows me to bring as much information as I can to my interpretation of the role. The novels are exceptional, they’re great page-turners and are full of very action-driven stories.

However, what I love even more is how the writers adapt the novels to the screen. Even though they take some great liberties, they’re still honoring the spirit of a novel. The most amazing thing is that authors Ty Frank and Daniel Abrams, who write under the joint pen name James S.A. Corey, are in the writing room and keeping a tight rein on the transposition of the novel to the screen and making sure that we honor the soul of the show.

FF: For anyone in our audience who may be new to The Expanse, can you talk a little about some of the interesting, timeless political issues that thread their way through the series?

CA: The issues that we deal with in The Expanse are visible around us in our everyday world right now. It’s an incredibly timely story that we’re telling. Powerful individuals in positions of strength in governments can be vulnerable to personal agendas, selfish, and self-serving ideas and corruption. We see a timeless picture being painted of people in positions of power using that power for these self-serving agendas putting millions of people in jeopardy. We also see the tale of technology, outgrowing our spiritual and emotional progress, moving forward in development before we’ve even been able to understand the moral, ethical, and environmental consequences of these dangerous and potentially catastrophic decisions.

FF: The Expanse is visually stunning, the plot intriguing, and the science behind the fiction smart, but the series works for me because of the characters. Everyone has depth and a backstory that viewers discover over time. What do you like most about your character, Alex Kamal? In your mind, how has he evolved since season 1?

CA: I love the story arcs of the characters on the show. They are rich, deep, fractured, and all of the shades of grey. There are no black and whites in The Expanse and Alex is no exception. Everyone on the Canterbury is broken in some way and running from their past. Alex starts the series very lost, he doesn’t know his purpose in life – he was a self-proclaimed glorified bus driver. But we watch him as he is thrown into the fire and forced to rise up to his potential and become more. He was always truly meant to be one of the greatest pilots and he deeply needs and loves belonging to a family. He’s found both in The Roci crew, a family he will do anything to protect.

FF: For many episodes, two seemingly unrelated storylines ran parallel. How cool was it to finally film scenes with Thomas Jane, who plays Detective Miller, at the end of Season 1?

CA: Season 1 and season 2 both had so many great moments where our storylines crossed, and season 3 is no exception. The three separate storylines between Earth, The Roci, and the belt keep the actors quite separated during the course of the season’s shooting, so, when the stories overlap and the opportunity arises for us to all work together on the same set it’s actually very exciting for us. We very much enjoy when we get to work with the rest of the team. I was becoming impatient to work with my dear friend Shohreh, so finally in season 3, it happened!

FF: The Rocinante crew becomes like a family as they fight to stay alive and stop a war. It seems as if the cast has also become very close. You guys look like you have a good time together! Do you have a favorite behind-the-scenes moment?

CA: I have quite a few because we hang out quite often during the course of the year. We go for dinner almost every week, we rehearse every weekend on our own time, and we usually celebrate special events like birthdays and holidays together when we’re all in Toronto. One of the funniest moments I remember was actually on a red carpet during the Toronto Film Festival. We just finished shooting and a few of us rushed to the EW party to participate in the festivities. Myself, Thomas, and Dominique ended up on the red carpet together and I noticed that the reporters were all grinning and pointing, and I looked down and there was Thomas in a full suit and tie with no shoes or socks on as he is beaming proudly on the red carpet with us. That shot made it into the newspapers. It was quite a funny moment.

FF: Is there an episode from Season 1 or 2 that particularly stands out for you?

CA: I have a couple of favorites from Season 1. I very much enjoyed “CQB”. I thought that was one of the most exciting episodes ever. That one particular scene where we were all trapped in a room and we lost one of our team members was one of the most difficult scenes we’ve shot. On top of that, it was also one of the most complicated and incredibly exciting for me to watch. My personal favorite episode was “Donkey Balls” and it has proven to be a defining episode for Alex, for myself, and for the fans.

In season 2 my very first space battle was a favorite for me for that season. Alex finally got to show what he was truly capable of.

FF: What are you most excited for fans to see in the coming season?

CA: The end of season 3 is completely mind-blowing. The story builds momentum like a runaway locomotive and it takes the series into a completely new realm. I don’t think viewers will have any idea what’s coming.

FF: Let’s talk a bit about your career. You’re amazingly versatile and have worked on feature films, television series, as a voice actor, and on the stage. I’m sure each has been rewarding in its own way. What are some career highlights for you, aside from The Expanse, of course!

CA: I’m a huge Shakespeare lover. I actually ran a Shakespeare in the park company in Montreal for over a decade, which was an incredible passion for me, and one of the most fulfilling experiences of my career.

In the voice world, I was fortunate enough to voice Altair, the first assassin, in the Assassin’s Creed franchise. It was my first ever voice gig and I love both that character and that game.

In the film and television world, I was extremely proud to be part of the movie Room, which received many Oscar nominations and awards, as well as several films by Nick Willing-specifically Neverland and Olympus. My most recent TV role outside of The Expanse was playing the nefarious and misunderstood Sanjay Desai on Guillermo del Toro’s The Strain – I loved to hate him.

FF: Are there any TV shows that you’re currently watching and want to rave about?

FF: Can you share a cool fan experience you’ve had while on the show?

CA: One of my favorite things about The Expanse fandom is the incredible exposure we have to science. I’m learning new things every episode on set about science and space travel. I’m a huge geek and total science buff, so I love being around all of that knowledge.

As a result of the show, I’ve been invited to a number of very special events including a few science and space exploration conventions. I’ve even been invited to ride in The Vomit Comet to experience Zero Gravity first hand. Next month, I’m going to be participating in a science event where I may meet Buzz Aldrin, which will be a huge thrill for me. Everyone at these events are all fans of the show so that definitely blows my mind.

Even when we went and did a panel at Caltech discussing the science in the show, everyone on the panel, as well as many in the audience, were all world class scientists themselves…and they were fans of the show – it was thrilling!

We want to thank Cas Anvar for taking the time to talk The Expanse with us! You can catch him Wednesday nights at 9/8c on Syfy.

You can find out where Cas will be meeting fans next and which conventions he is attending here.

Thanks to Linda White and Tabitha Lord from the Fan Fest team for their contributions to this interview!