Geeklings, I hope you’re ready for plenty of Defenders in 2017 because Netflix won’t be the only place to find Daredevil, Jessica Jones, Iron Fist, and Luke Cage as the group is coming back to comics with a new on going series by Brian Michael Bendis and artist David Marquez. The very same duo that just wrapped on Civil War II. Say what you will about Civil War II (and if you read my Pull List column you’ll see that I have plenty to say) but one of the things that can’t be denied was the breath taking art that David Marquez provided. While Civil War II may not have been the fantastic story Marvel wanted it to be that doesn’t mean that we should lose faith in Bendis’s ability to write compelling stories.  For starters Bendis is familiar with each one of these characters having written solo titles for Daredevil and Jessica Jones (great, great runs. Do yourself a favor and look into those collections) and he’s written Luke Cage and Iron Fist during his New Avengers run so there is a familiarity with these characters. Needless to say Bendis is no stranger to these characters which is a plus because I feel Bendis shines best when he has a close relationship with his characters. 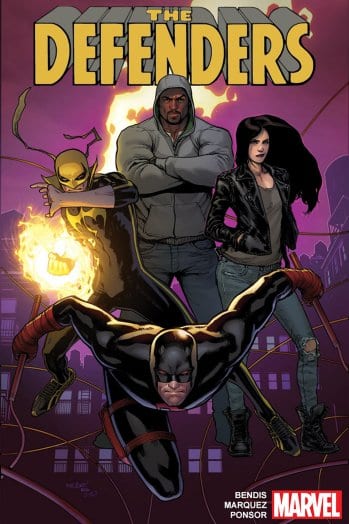 What should we expect from this new on going series (coming in May). Bendis says-

“I wanted do a sprawling, Godfather-like epic at the street level of the Marvel Universe, Really putting our hooks down and creating a modern, elaborate organized crime story that is different than what has gone before, but builds on everything that has happened to these characters, as individuals or as a team, and putting them in the hardest battle for the street that anyone can imagine.”

I don’t know about you guys but he had me at “Godfather-like epic”. What could that possibly mean? Does that mean we should expect the Kingpin to be taking on our four street level heroes or could it be Black Cat (who has sort of taken over the Kingpin role. No, it’s true. Read an Amazing Spider-Man/Spider-Man comic if you don’t believe me)? Kingpin seems to work the best considering his relationship to the Netflix universe but who knows, maybe it’ll be something different all together. The one thing I’m looking forward to, and the one thing I especially love about the Netflix shows, is how ground level these characters are. Characters like Iron Man, Captain America, and the Guardians of the Galaxy seem to exist on such a larger scale. Don’t get me wrong, I love those characters but there’s something gritty and personal that I love about the characters that make up the Defenders. Maybe because it’s more intimate or because it’s such a smaller scope, I can’t pin point it, but I do know that the prospect of a new Defenders comic has me jonesing (pun not intended but it was pretty good).

While it’s easy to say Marvel is just putting this book out to cash in on the success the Netflix shows one has to remember that these heroes existed way before Netflix did. There have been some truly awesome stories that have inspired and hold the roots of the success of these shows. Think Frank Miller and Mark Waid (and Bendis) for Daredevil, Bendis’s incredible Jessica Jones run, and Power Man and Iron Fist series. One hand washes the other and while the comics paved the way for the Netflix shows, the Netflix shows have paved for the current popularity of these characters. I think Marvel would be missing a huge opportunity here by not putting these characters together in a series. The public wants to see them together and the comic books will just be another avenue for audiences to spend more time with characters that have become as commonly mentioned as the Iron Mans and Captain Americas.

What do you think Geeklings? Are you excited to see the Defenders return to comics? Are you happy about the Bendis and Marquez team up? Sound off in the comments below and as always you can find me on Twitter @iamgeek32 if you feel the need to talk more about this or other geeky things.

Images from Marvel and Netflix