The gang is watching a documentary on the feud between Tesla and Edison. This inspires Leonard to go see the Tesla coil. Sheldon can’t go for classified reasons.

He’s been hired back by the military. Howard and Leonard ask Colonel Williams about Sheldon. Indirectly, he says that Sheldon is working for them behind Howard and Leornard’s back. He is such an Edison… 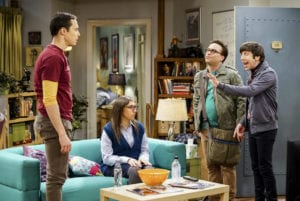 Amy tries to rationalize with him, but naturally he twists her meaning and says he cares to much about everyone’s feelings.

Raj and Ruchie stop by Howard and Bernadette’s to see how Bernie is doing. She’s still on bed rest and thinks that Ruchie is after her job. Bernie asks Raj to figure out if she is.

Howard and Leonard are still fuming over Sheldon’s betrayal and in their rage, they come up with a better, more efficient solution to the project. Unfortunately, they can’t do the math and hire Kripke. He’s all for screwing Sheldon over. 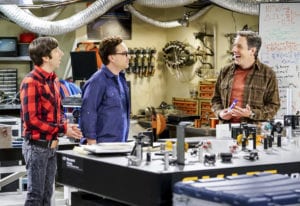 The military cancels Sheldon’s project in favor for Howard and Leonard’s. Unfortunately, Kripke screwed them over too and submitted it to the military by himself. So, no one wins.

Just when Sheldon starts to redeem himself, he does something like this. I’m all for character consistency, but I definitely prefer the newer Sheldon… not season 1 Sheldon. Also, why is everyone betraying everyone in this episode? I get that it’s supposed to mirror the feud between Tesla and Edison, but dang there’s too much backstabbing!