Sheldon is pitching a fit because Penny bought a sandwich on chinese food night. He and Amy get into an argument as to who really invented the sandwich. For once Sheldon admits he was wrong. He still doesn’t like the food truck that’s parked outside of the building. Sheldon complained to the Tenant’s Association about the truck and had it moved… also, he is the Tenant’s Association. 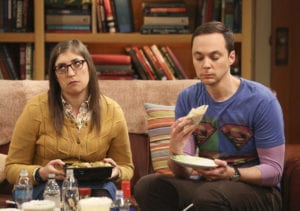 Howard and Raj find a drone in the bushes. Should they find it’s owner? Too late, Howard already synced it up to an old remote. Bernadette interferes and gets them to actually try to find the owner. They find a brief clip of the drone’s owner and she has a pin from the comic book store. Conveniently, Stuart has her address. Raj returns the drone and in return, he gets her phone number.

It turns out that Sheldon is the entire Tenant’s Association and has voted himself in as President. Penny and Leonard make a motion to vote him out of office, but Amy is persuaded to keep him in. Amy apologizes but comes up with a plan to get the rest of the building to vote their way. That way they win and Amy doesn’t betray Sheldon. 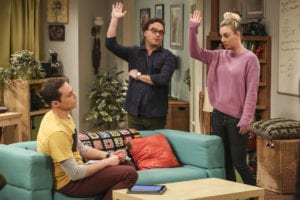 Leonard decides to run for Tenant’s Association President and he and Penny go door to door asking the other tenants to vote for him. It doesn’t go very well. Sheldon takes offense to Leonard running against him and tries to get even. He really tries. Leonard comes back with a legal technicality and when Sheldon tries to rebuttal, Amy steps up and votes Leonard.

This episode was a bit light on content. It’s season 11 and we’re just now finding out about the Tenant’s Association? I feel like they could’ve done so much more with that. The possibilities are endless! I feel like Sheldon didn’t use his “powers” enough. I do love that Raj was smooth enough to get the girl’s phone number but creepy enough to scare her off. I liked the episode, but I felt like at this point in the series we could be focusing on other things.