Mary Cooper is refusing to come to Sheldon’s wedding unless he invites his older brother, Georgie. One problem, Georgie is ignoring his calls. Sheldon has no choice but to fly to Texas to talk to Georgie at his tire shop. Georgie-er George has a colorful way of saying that no, he isn’t going.

Sheldon calls his mother to tattle but she says she’s not getting in the middle of it. They’re big boys and can work it out themselves. Leonard tries to help. It turns out that George and Leonard are more alike than George and Sheldon. They bond over what they’ve had to sacrifice for Sheldon. Sheldon has never thanked them.

The boys talk it out. Sheldon didn’t realize how hard he made things for his family and apologizes. Georgie is going to come to the wedding. 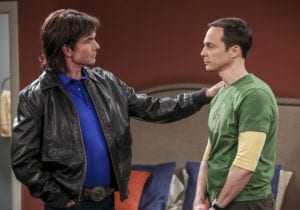 Amy, Bernadette, and Penny are putting the goodie bags together when Howard announces that the kids have pink eye. The kids give it to Howard who in turn gives it to Raj and Bernadette. Then Amy gets it… a week before the wedding. What is she going to do? Good thing they packed Purell in those goodie bags. They all head to the doctor.

Amy Skypes Sheldon to tell him to stay in Texas a little longer. There’s no way he’ll go through with the wedding if he knows that pink eye is running rampant. 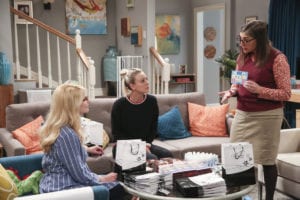 Raj has a brother? How have we not heard of him before now? Anyway, this episode is probably my favorite of the season. It was funny, there was wedding talk, and everything about it was great. More importantly, I love Jerry O’Connell as Georgie!