It’s a month before the big wedding, which means bachelor/bachelorette parties! As it  turns out,   Leonard’s bachelor party was their last trip together. They’re long overdue. Well, Sheldon is excited to get a letter from Dr. Wolcott as they are thinking of collaborating on a non-linear time theory. Dr. Wolcott had decided to shut off all communication with people and lives in a cabin in the woods.

The guys head to Wocott’s cabin but Sheldon made it clear that this is not a bachelor party. Dr. Wolcott is a lot like Sheldon. He has coded his notebook backwards and uses letters for numbers and number for letters. He also has a “grudge chair” where he thinks about people who have wronged him. Sheldon knows that he’d spend too much time in that chair, that’s why he doesn’t have one. 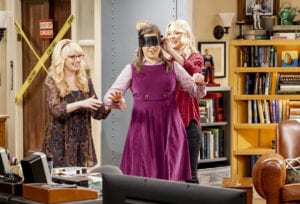 Amy finally wakes up in Leonard and Penny’s apartment. Penny makes up stories about her dancing with shirtless firemen. Sadly, no pictures of the firemen but there are pictures of the girls partying and eventually carrying Amy home. 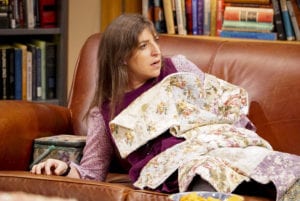 This episode was fabulous. I’m so glad that we are back on the subject of the weeding. I loved seeing Amy let loose and have fun. She deserved every last bit of fun. I also loved that Sheldon knows the difference between rabbit and squirrel. It’s also pretty great that Sheldon and Amy finally admitted to each other and to themselves that they are into more than just science.