Welcome back, BBT is back on it’s usual night and Young Sheldon is back on right after BBT at 8:30.

Howard is getting a vasectomy the next day, and naturally Sheldon’s news is more important. They are bringing back Professor Proton’s show and are looking to recast the lead.

Howard is really nervous about his surgery and just like with Bernie’s pregnancy, Raj is all up in there business. After surgery, Howard is put on bed rest. Bernie goes to her doctor’s appointment and is told that she also be on bed rest because she’s over doing it. 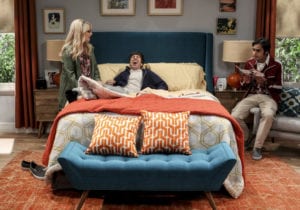 Sheldon is auditioning for the role of Professor Proton and Amy is concerned that Sheldon isn’t catering this to small children because he was teaching dangerous experiments that are above a child’s level and that he isn’t very friendly while speaking. So he consults Wil Wheaton.

Wheaton gets the part. I’m sure Sheldon used his enraged face when he heard the news. 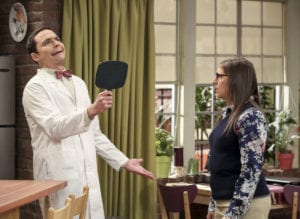 Sheldon has a dream that he’s talking to Arthur about Wil Wheaton taking on his legacy. Naturally Arthur doesn’t want to put up with his antics.

Sheldon visits Wil and asks him to turn down the role. Wil promises that he will do his best to keep the legacy going just as Sheldon wants. Sheldon can’t tell if he’s lying or not.

Much to their reluctance, Penny offers to help Howard and Bernie with Halley. While Penny is changing Halley, she calls out “mama!” Halley said her first word! Too bad her parents weren’t there to witness it in person.

This episode was cute. Halley said her first word, Penny proves that she’s responsible, and Sheldon kind of makes peace with Wil getting the role of Professor Proton. The story didn’t really move with this episode but now we know that Howard and Bernie won’t have any more kids and that Penny is good with them.

See you all next Thursday!