Wil Wheaton is the new Professor Proton as Sheldon is not happy. Amy makes him watch the show anyway.

It turns out that Wil’s show is so enjoyable that even Sheldon likes it. That is until he sees that Wil invited Howard to guest star.

Leonard has been writing a book about a scientist who uses science to fight crime. He even got a typewriter keyboard that makes him feel like Hemingway. He asks Howard and Raj for their input and Howard advises him to consult Bernadette seeing as bed rest has allowed her to binge every detective show online.

Sheldon asks Howard how he came to be on the show and Howard tells him to apologize to Wil.

Bernadette helps Leonard with his book and makes an observation that Ilsa is based on Penny. It’s not a flattering character description. 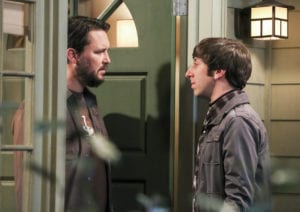 Sheldon and Howard go over to Wil’s house so Sheldon can apologize. It goes well and Wil asks if Amy would be interested in joining the show because he thinks it would be great to have a female scientist on the show.

He’s not thrilled but is excited for her. Unfortunately, she’s not interested. She doesn’t want to get in the middle of Sheldon and Wil. It turns out that she doesn’t do a lot of things because it’ll upset him. Actually, everyone walks on eggshells to spare his feelings.

He vows to change. He starts with letting Amy win a game of chess. He also tells her that she has the power to influence the next generation of female scientists.

Penny reads Leonard’s draft and she seems to really like it. She comments on Ilsa. Penny thinks that he based her on Bernadette.

The two hang out and Bernadette reveals that Ilsa is based on Penny. Penny rereads the book and is disgusted by the character and confronts Leonard. 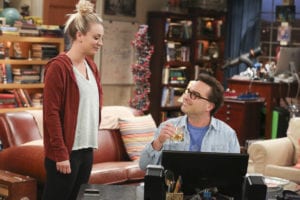 Leonard panics but can’t come up with a good answer as to why he depicted his wife like that.

He calls his mother for advice and while talking to her, he realizes that he was writing about his mother, not Penny!

This wasn’t the best episode but it did bring back some things that I personally forgot about: Leonard’s book and the new keep Professor Proton show. It tied up a few loose ends but it was a little flat. Not a whole lot happened and it kind of seemed to drag on a bit. That being said, I still liked it. I love when shows bring up stuff that hasn’t been talked about for a while, it really keeps shows like this from being just a bunch of stand-alone episodes.

Due to the Olympics, The Big Bang Theory will be taking a hiatus and will be back March 8th.