Sheldon believes that faculty mixers are a waste of money and that money could be used elsewhere, like to fund research. The boys discuss the concept of a microscopic black hole and why they are worth looking into. Penny and Amy are browsing catalogs for wedding dresses to give her ideas of what she might want. Sheldon asks the girls how he could obtain $500 million for the project. Amy tells him that he might have to be patient and potentially wait (8 long years) to get the full amount.

Ultimately he is turned down and the boys tell him to just be patient or wait for science to get cheaper. Sheldon then decides to start a Kickstarter campaign and even sells some of his comic books to help fund his project. Science is more important that research (gasp!). 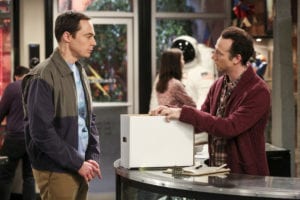 Sheldon has raised $65k so far. To help him out, Raj mentions Vegas. Sheldon goes and gets caught trying to play the system.

Bernie and Penny are at the bridal store while Amy tries on dresses. The occasion is nice but the day drinking and finger sandwiches make it even nicer. Amy finds some pretty dresses and she is having so much fun.

Amy picks a dress that Penny and Bernie think is awful. They can’t decide how to tell her. Bernie ends up leaving Penny hanging by saying it’s beautiful while Penny tells the truth. Amy cares about Penny’s opinion and is deeply hurt by Penny’s comment. Penny apologizes and admits that it is her day and she should choose whatever dress makes her happy. It was a nice moment until Bernie calls finally backing Penny up. She decides to keep the dress after Sheldon sees her in it and thinks she’s absolutely beautiful in it. 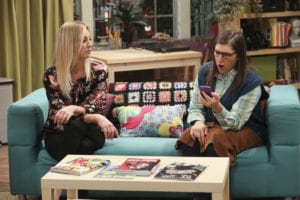 This episode was great but I thought that Amy and Sheldon were a lot further into the wedding planning process then they are. She’s just now picking a dress? I watch Say Yes to the Dress religiously and I know it takes 6-8 months for the dress to come in, not to mention all of the fittings and whatnot. For the sake of the TV universe, I do understand why the timeline is crunched, but still. That’s my only beef with the episode. Everything involving Sheldon and the boys was great. I was sad that he sold his comic books but that just shows how dedicated he is to his profession. Even his reaction to Amy’s dress was perfect, but isn’t it bad luck to see the dress before the wedding?