Penny gets to meet Bill Gates! He wants to partner with her company. Everyone’s excited except for Sheldon. He thinks it’s one big April Fool’s joke. Penny’s up for a promotion but she’s worried she’ll mess up and not get it. Leonard offers to help by possibly coming along to make her feel better. 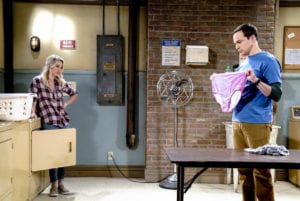 Sheldon thought he was doing a good deed by folding Penny’s laundry. It wasn’t hers… But he is coming around to believing that Bill Gates is actually going to be there. Scratch that, he still doesn’t know what to believe.

Stuart babysits so Bernadette can hang out with Amy. Bernie is going a little nuts because she’s so engrossed with her kids but doesn’t want to be one of those moms who can only talk about her kids. It’s not going well. She can’t seem to turn the mothering off. New mothers are prone to changes and Bernie decides to use her new brain to learn everything she can.

The boys want to meet Bill Gates but his schedule is booked. Leonard conveniently finds out where he’s staying and they head out to meet him. Leonard goes to talk to him and gets really emotional. Back at the apartment, Leonard tells Sheldon that he met Bill Gates and sends Sheldon to the wrong hotel. April Fools! 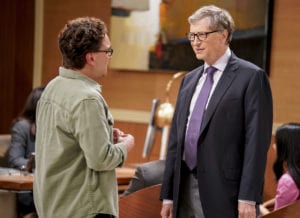 Penny invites Leonard to a reception so he can meet Bill Gates again. He freaks out because he went behind her back to meet him already. He decided to fake being sick to get out of going. Penny, being the wonderful wife she is, gets Bill Gates to FaceTime with him. Leonard’s cover is blown. Leonard makes a really romantic dinner, with candles and flowers, to make it up to Penny. He ends up apologizing to Sheldon instead 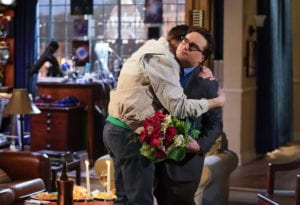 This episode was great and Bill Gates makes it even better. I loved how Penny was the one who got to meet him (officially) and how the guys were jealous of her for once. Plus she is such a wonderful wife, thinking of Leonard enough to get Bill Gates to FaceTime him. It was also great to see Sheldon get duped into running all over to find Bill Gates. He may be getting better with his social skills, but he’s still super gullible.