Howard and Bernadette found out that they are having a boy! Unfortunately Howard is not ready. He feels like he won’t be good at teaching his son things since he didn’t have a father growing up. He does think that model rockets would be something cool to teach his son. 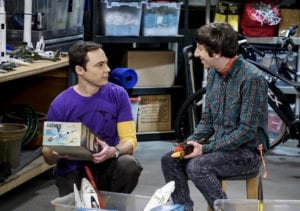 The boys go to Howard’s garage to make model rockets. Here Sheldon and Howard begin to bond over their absent fathers. They go out to the desert to launch some.

Raj doesn’t go with them because he doesn’t understand the same pain Sheldon and Howard feel when it comes to childhood. He helps Bernadette recycle Halley’s clothes to be more boy-like. I guess Bernadette doesn’t feel comfortable putting her little man in a “Daddy’s Little Girl” onsie. 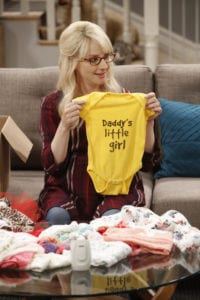 Back at the apartment, Penny and Beverly begin to get chummy. Beverly apparently dons’t have a lot of girl friends and enlists Penny as one. Leonard doesn’t really like that Penny is talking to his mother. He’s probably just jealous because she told Penny that she was proud of her. He goes to Amy for help and both just end up upset over Beverly and Penny’s friendship.

Leonard confronts his mother about her friendship with Penny and Beverly finally says that she is proud of him.

Howard and Sheldon launch a rocket and it blows up. Sheldon then strikes a nerve about Howard’s ability to be a parent. He tries to make up for it, though. Sheldon finally admits that he has a driver’s license to Howard and he let’s Sheldon drive. Howard helps Sheldon perfect his driving and Sheldon tells Howard that he is a great teacher and his son will be lucky to have him as a father.

Sheldon gets pulled over for speeding and tells the cop to just keep his license.

This episode was adorable. Sheldon was his same annoying self, but he was a good friend to Howard. I also like the back and forth of the multiple story lines, it keeps the episode fast paced. Hopefully next week keeps the charm and humor fast paced like this week.