The gang is up on the roof looking at Mercury. Penny takes a look through the telescope and sees something fuzzy. It turns out that it was a comet that hasn’t been discovered yet. Raj took all of the credit leading to a fight. This hits a nerve with Penny because everyone always takes credit for what she does. (Preach!) She feels like no one takes her seriously. 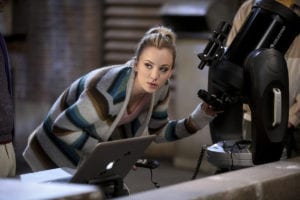 Stuart sees a social media post from Neil Gaiman complimenting his comic book store. Stuart doesn’t remember Neil coming to the store but he’s super excited about the publicity. Neil Gaiman’s tweet brought in a ton of people to the store. The store becomes so popular that Stuart can’t babysit for Bernadette and Howard and he has to hire an employee. Sheldon is not happy. There is too much change. Amy helps him through this tough time. Denise is pretty awesome, but Amy doesn’t think so.

Leonard confronts Raj about the comet. Can’t they share credit? Leonard quotes Katy Perry to get Penny to see that she can fight her own battles. To be fair, I think he just didn’t want to make either of them mad. Penny goes to confront Raj and he promises to share credit, even if it means slightly tarnishing his reputation. 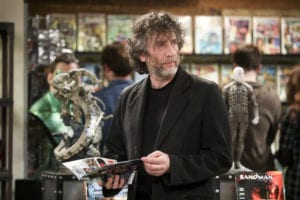 Penny hit the nail on the head! This situation is so relatable it is not even funny. I get why Raj wants the credit, but come on! His career is fine, his rep is fine and now his friendship with Penny is fine. This episode was great. Neil Gaiman, a wonderful author was so funny. Denise was a surprise, I didn’t expect her to pass Sheldon’s tests. Hopefully, Stuart’s store can keep up the good business to keep Denise around.