While the gang catches up, Amy announces that she is working on a new project but they are having some engineering issues. Howard chimes in that he can help her out.

Amy introduces Howard to her lab and he is excited! The pair are looking forward to working together. Leonard however, is not because he has to drive Sheldon to work. Sheldon has a new car game too.

Amy and Howard are getting along great, it’s very reminiscent to back in Season 7 when they were paired together for a scavenger hunt. They are listening to music, dancing and enjoying magic tricks. 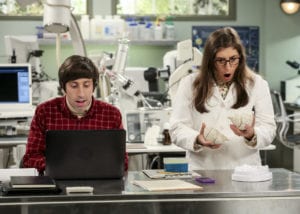 Sheldon stops by to check on Amy. He suggests using Morse Code to talk behind Howard’s back. Unfortunately for Sheldon, Howard knows Morse Code…

It seems like Sheldon and Raj are getting a bit jealous of Amy and Howard working together. They both go and bug Bernadette to complain about Amy and Howard. Bernadette uses this to her advantage. Sadly Raj ruins this for her. 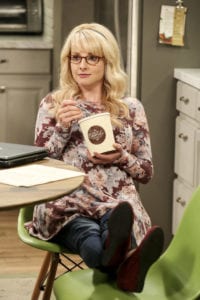 Bernadette had left a parenting book at Penny and Leonard’s and Penny uses it to calm Sheldon down. It’s almost like a magic Sheldon instruction manual. It works on Leonard too. They begin to argue over parenting styles. Does this mean they’re seriously thinking about having kids?

Sheldon and Raj decide to deal with their situation by hanging out together. Raj quickly sees why they haven’t done this before.

This episode was cute, it brought back that Amy/Howard dynamic which was great to see. It was also nice to see Sheldon getting put in his place a little bit, by not always getting his way. Penny should hold onto that book.Speaking of her and Leonard, could they be thinking about having kids? We’ll have to wait and see.