Now that Michael is here, Howard and Bernadette are spending time together as a family before they have to go back to work. Howard is beginning to think it might be better if one of them stayed home with the kids. He actually wants to stay home because Bernadette is super invested in her job, but thinks she’s the better parent.

When he brings it up to Bernadette, her reaction is mixed. She feels that as the mother, she should have the right to choose whether she stays home or goes to work. She wants to but doesn’t want to feel like she’s abandoning her kids. 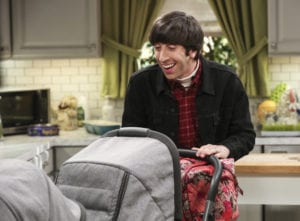 Howard decides to take the kids out for a stroll to prove to Bernadette that he can handle being a stay at home dad. It’s tougher than he thinks. Bernadette meets Penny at work and although she says she doesn’t miss work, her actions say otherwise.

Raj helps Howard out and Howard feels like he can’t do it. When Bernadette comes home, they confess to each other that they both want to work and they’ll figure something out.

Amy and Sheldon have finally picked a date to put on their save the date: May 12.  The only problem is that they only have 2 months to find a venue. They have their eyes on the Athenaeum, partially because Einstein was a member, but also because it’s gorgeous.

Leonard has said that the Athenaeum is incredibly exclusive. He lied, he’s actually a member of the club and so is Kripke. Amy tries to reserve their date, but Kripke has already booked his birthday party on that date. 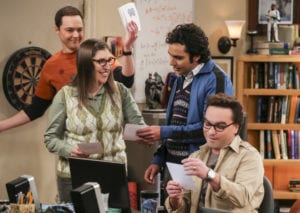 Sheldon contemplates moving their wedding date when Leonard comes in to apologize. They tell him about Kripke and throw him out.

Leonard confronts Kripke about the date and they make a deal that he’ll clean the lab if Kripke will give up the date. Amy is ecstatic until they tell her part of the deal was that Kripke sings at the wedding. Needless to say, Amy wants to find a new venue.

Howard and Bernadette are awesome parents and they make the cutest little family.  Overall, this episode was cute. Leonard was a jerk but he redeems himself nicely. I’m just happy to see that Sheldon and Amy have made progress in their wedding planning. The two-month countdown begins!