So, I’m not sure if you guys know this but I have a blog of my own called I Am Geek (which you can find here if you ever feel like reading more posts from yours truly. Thank you in advance for reading and for this shameless self promotion). While thinking of things to write about I thought how great it would be to write a two part column about the best of this years Comic Con. An epic top ten list filled with geeky goodness, if you will. What I discovered is that only one of those parts would play out well on Fan Fest, and the other worked well for my blog. I put off the two part column here and focused on adding this top five (or fiveish) list. No foreplay just get right to the heart of the matter. If you’re curious to what the other five items were you can always click here to find out. I figured Fan Fest deserved the best of the best and that’s what I’m giving you. Well the best of the best in this writer’s most humble opinion (not entirely sure how humble I am actually). There were so many wonderful things to come out of Comic Con this year that it was difficult to narrow them down in this one list, but damn it, I did my best.

Now for your reading pleasure I present to you… the Best of Comic Con 2016! Enjoy

5.5 Marvel Netflix Trailers Galore– Last Thursday night I spent at my sister’s house so we could finish watching the last two episodes of Stranger Things, something I still haven’t recovered from. Oh, how I miss it. In between episodes we stopped for bathroom breaks, get snacks, refresh beverages, or whatever the reasons people stop watching something for. During that down time I checked Faceyspace to see that Marvel had blown it up with Netflix trailers galore! I couldn’t believe it. We had a teaser for the Defenders which used a great stripped version of Nirvana’s “Come As You Are” thus speaking to my inner 90’s kid. We had the announcement of Daredevil season 3 (which was way over due), we had a trailer for Luke Cage and Iron Fist. And as each one dropped I sat there turning to my brother in-law and sister going, “New Defenders trailer! Daredevil got a season three!! Luke Cage trailer!!! Iron Fist!!!” Granted the majority of these trailers are just teasers, but they worked. I’m even more pumped for this area of the MCU. Some how I don’t think they’ll be able to stick with their one show every six month schedule. I just don’t see how they can get all of these shows in that way. Which is awesome news for us!

5. Dr. Strange trailer- When the first Dr. Strange trailer dropped (was that in October or November?) I was on board. The film totally has a different vibe than any of the other Marvel movies and looked to be trying to be the Inception of the MCU. That was something I could be on board with. Not to mention it’s got the Cumberbatch and Mads Mikkelsen (the best version of Hannibal Lecter ever. I stand by that and will argue if need be). How could this go wrong? Well based off the newest trailer… it doesn’t look to. We get more of an idea of how trippy this film is going to be as well as Strange’s quest. Visually the movie looks stunning and I’m very excited to see the MCU expand into new, weirder territory. I should have said “strange territory” and the fact that I didn’t make that joke will haunt me all through the night. To make up for that please enjoy the trailer

4. Justice League trailer- Now I know some of you must be thinking why isn’t this higher in the list? First I want to explain that I was shocked that this even happened. I was getting myself some vitamin D and checking my feeds when I learned that it dropped, and immediately searched for wifi… which I was unable to find. Grrrrrrrr I know that they’ve been filming the movie but I had no idea that they had enough footage to put together a trailer. That was a pleasant surprise. As for the material itself? I didn’t hate it. I haven’t been on board with the casting of the Flash (not when Grant Gustin has been so damn good) but this trailer helped lighten my disappointment. I do like the importance put on Aquaman who is a character I’ve always thought of as kind of a chump (and keep thinking to the Big Bang Theory costume party when I think of him). I think Aquaman could use this Khal Drago under water face lift, and the trailer really made him seem like the one piece the Justice League needs to be a thing. I have no problem with Affleck as Batman but I did have a problem with him trying to do his best Tony Stark in the trailer. There is no way that Bruce Wayne would give up the fact that he was Batman when trying to recruit a kid, it just seemed kind of reckless and arrogant of him (*ahem* Tony Starkish *ahem*). Other than that I dug what I saw. Could have used a bit more Cyborg though.

3. The Walking Dead season 7 trailer– You know what I loved about this trailer Geeklings? How it opened with Negan trying to figure out who was going to get intimate with Lucille, and then… didn’t include any of those characters in the rest of the trailer. I love things like that. More often than not trailers slip up and show us a character that were in peril only to discover that they survived. Good-bye intrigue and tension. The new Walking Dead chooses to focus on Carol, Morgan, Negan, and some new characters which helps expand this universe. Fans of the comic will see that Ezekiel and Shiva are present this season, as is the Kingdom. I’ve been curious to see how the show was going to incorporate that story line, and right now, as a complete superficial reaction, I think they’re going to handle it just fine. How unsettling is that image of Lucille dripping blood and gore? Someone is going to get it bad, and at least we’ll know right away. Tear the band-aid right off.

3. Blair Witch sequel- Colored me super surprised to find out that this was a thing. The only sequel I remember was that terrible one that came out with the guy from Burn Notice. I actually paid to see that in the theater and I’m still waiting for my refund. I check my mail for it daily, and much like the Blair Witch herself, it has been allusive. With that being said though, this trailer looks kind of terrific, playing as a direct sequel to the original film. It looks like Heather’s brother is searching for her now that some of the footage has been recovered. I worry that it might have too much of a Paranormal Activity vibe, but if I’m being honest that movie sort of ruined my life. I think it might be the only time I’ve ever screamed out loud in a movie theater. What? Possession movies scare the crap out of me, alright? I think the world is ready for a new Blair Witch movie, and I know the horror movie scene could use a bit of a face lift as it’s been ages since I’ve watched a horror movie that has made me afraid to blink. I’m willing to put some hope in the Blair Witch… maybe it’s the horror movie we deserve. Plus who doesn’t want to relive people screaming “tell me where you are Josh” through the woods? 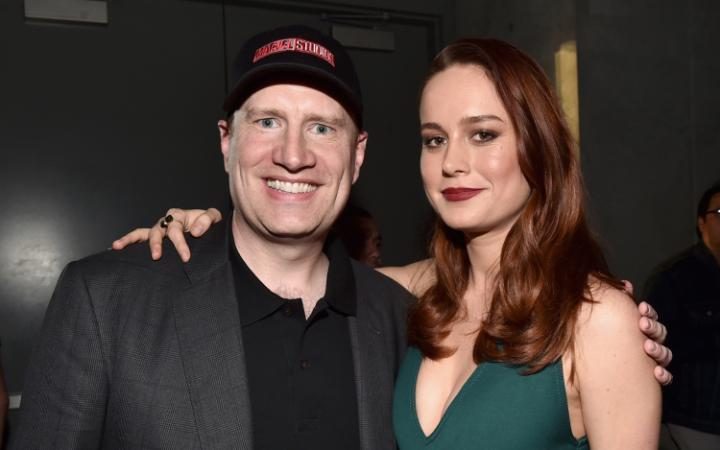 2. Brie Larson announced as Captain Marvel– I looooooooved this announcement. There were rumors that Marvel and Larson were in talks for the part but nothing was announced after that. I was excited for this then and I’m excited for this now that it’s a real thing. I’ve been a fan of Brie Larson since her Scott Pilgrim and Community roles, and think she’s a perfect fit to take on Carol Danvers. Not to mention a lot of Captain Marvel stories take place in space, and you know who else is up in space? That’s right. The Guardians of the Galaxy. I’m willing to bet that the first time we see Larson in the role will be in Guardians Vol. 2 whether it’s in a cameo or a post credit scene. I’m just thinking about her interacting with Chris Pratt or Rocket and I’m filled with glee. Plus Captain Marvel is a crazy cat lady (sorry, flerken) and that’s delightful. Bravo Marvel for another excellent casting.

1. Wonder Woman trailer- As if there could have been anything else. The Wonder Woman trailer was hands down the biggest stand out of this years Comic Con. Let’s be honest Wonder Woman was arguably the best part of BvS (that and the endless Martha memes… thank you interwebs) and this trailer makes it seem like she’s going to be the best part of the DCCU (is that a thing?). This trailer is dazzling, and bright (which is strange for a DC movie), filled with action, and totally comes across as DC’s Captain America franchise (both literally and figuratively). I actually got so jazzed after watching this thing that I downloaded my first Wonder Woman comic. One thing Marvel has yet to do is put a female driven hero movie out, and not is DC going to beat them to the punch, but it also looks like it’s going to be awesome. If anything the DC movies will have that one up over Marvel. Now if you’ll excuse me I’m going to watch this again.

Thus concludes my Best of Comic Con 2016. All and all I thought this was a great year for us Geeks. And while we can debate over who won there’s little debate in saying that we the geeks are the real winners here. And that’s all I could ask for. If you feel like there was something I missed by all means mention them in the comments. Thee was so much goodness this year it’s hard to include everything in one small list.

Trailers and Images brought to you by DC, WB, Lions Gate, Marvel, Netflix, and AMC