Fans have been eager for any new tidbits of news about The Batman and on Wednesday, their prayers were finally answered when Warner Bros posted a new synopsis for the film. One line in particular has fans buzzing as it could potentially mean we see a villain team up with Batman to try and take down The Riddler.

“When a killer targets Gotham’s elite with a series of sadistic machinations, a trail of cryptic clues sends the World’s Greatest Detective on an investigation into the underworld, where he encounters such characters as Selina Kyle/aka Catwoman (Zoë Kravitz), Oswald Cobblepot/aka the Penguin (Colin Farrell), Carmine Falcone (John Turturro), and Edward Nashton/aka the Riddler (Paul Dano).  As the evidence begins to lead closer to home and the scale of the perpetrator’s plans becomes clear, Batman must forge new relationships, unmask the culprit, and bring justice to the abuse of power and corruption that has long plagued Gotham City.”

You can check out the full synopsis below: 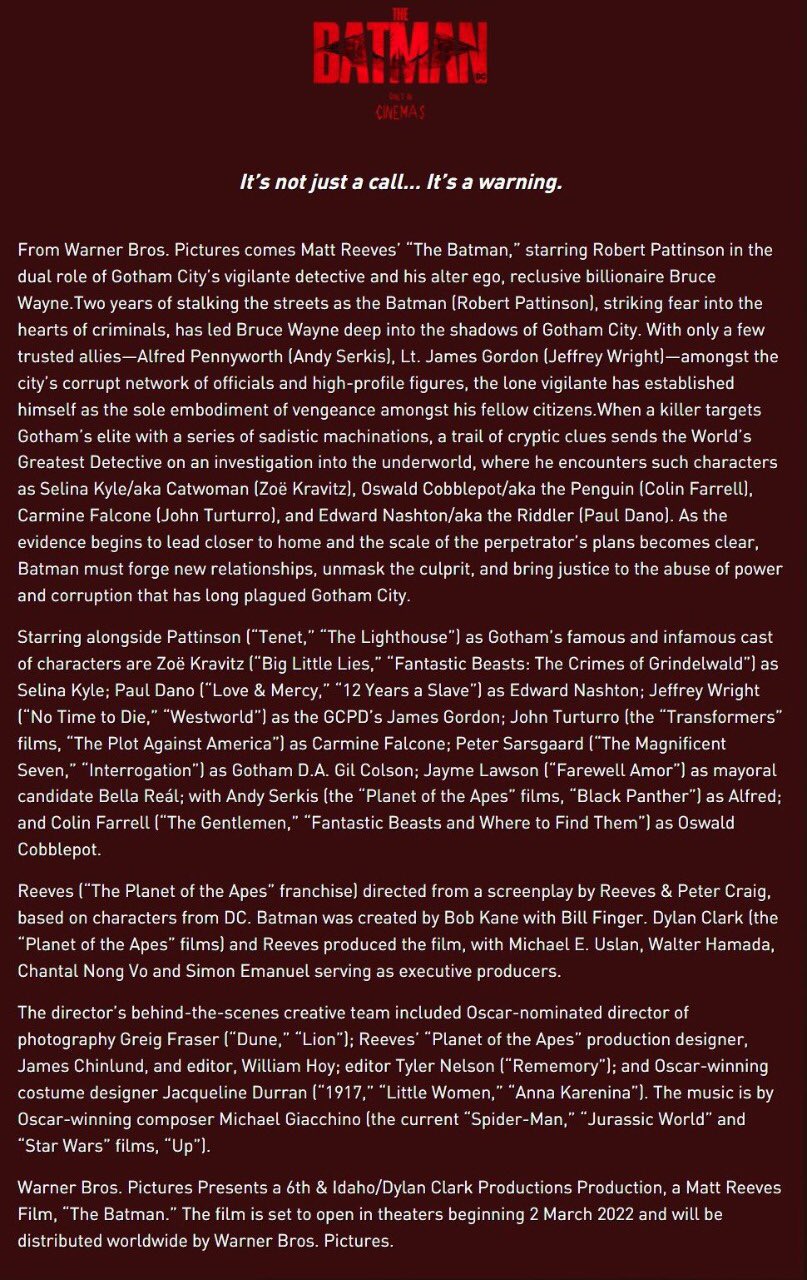 The line that has people talking says that “Batman must forge new relationships.” As we already know, Batman will be teaming up with Commissioner Gordan per a previous trailer; some are speculating this means that he’ll have to partner up with a villain to try and save the day. Due to some action we’ve also seen in previous trailers, there are a few options that make sense if this happens.

The most likely candidate is by far Zoë Kravitz’s Catwoman. We see the pair of them together in several scenes and with the star recently saying that Robert Pattinson’s Batman is “out of this world” we can only imagine the two have shared a lot of on-screen time together.

However, it’s not impossible that in the end, Batman has to get some help from Colin Farrell’s Penguin. In Batman #58, Oswald Cobblepot actually teams up with the caped crusader to take on an unknown villain threatening Batman as well. Coincidence? Well, potentially, but as the trailer showed Batman catching Penguin in the end, it’s not impossible that this is when the team-up begins.

What do you think of this newest synopsis for The Batman? Is there a potential storyline no one is expecting under the surface? Tell us in the comments!