Spoiler Alert!  The following contains spoilers from episode 4 of The Alienist titled These Bloody Thoughts.

The investigation continues and Dr. Laszlo Kreizler’s obsessiveness in figuring out the mindset of the killer grows in the newest episode of The Alienist.

To start off with, Kreizler goes to visit an old patient of his hoping to gain some understanding of what the killer is thinking when he commits his crimes.  It seems this particular former patient might have dabbled a bit in mutilation or domination of some sort.  She tells him that a person would most likely want to cause pain or inflict mutilation if that is something present in their own lives already even using Kreizler as an example.  She heavily implies Kreizler has a dark past perhaps filled with taking pleasure and developing fantasies off of his patients’ twisted stories.  What other dark secrets might Kreizler’s past hold?

Commissioner Roosevelt isn’t doing much better.  On his way into the police department, he is bombarded by reporters who are throwing out questions at him regarding the murders and accusing him of obstructing the investigation.  He just makes it into his office and escapes the mob of reporters when Captain Connor asks for a moment of his time.  He also asks Sara to come into the office and Connor presents to the commissioner John Moore’s sketchbook which he recovered from the last crime scene.  Connor plays off the find as an unknown piece of evidence but his sarcasm tells the full story.  He knows full well that the book belongs to Moore an that Roosevelt is up to something.

Roosevelt immediately sends Sara to bring Moore’s book to Kreizler.  While there, Kreizler asks if she’s given more thought to immersing herself in the mind of the serial killer.  While Sara feels that she doesn’t have the capacity to think like a murderer, Kreizler points out a woman sitting in the park with a stroller.  Though the woman had given birth to a boy and a girl and she adored her children, the stroller is empty because she ended up drowning both children.  The moral of his story is that perhaps we all have the ability to kill. 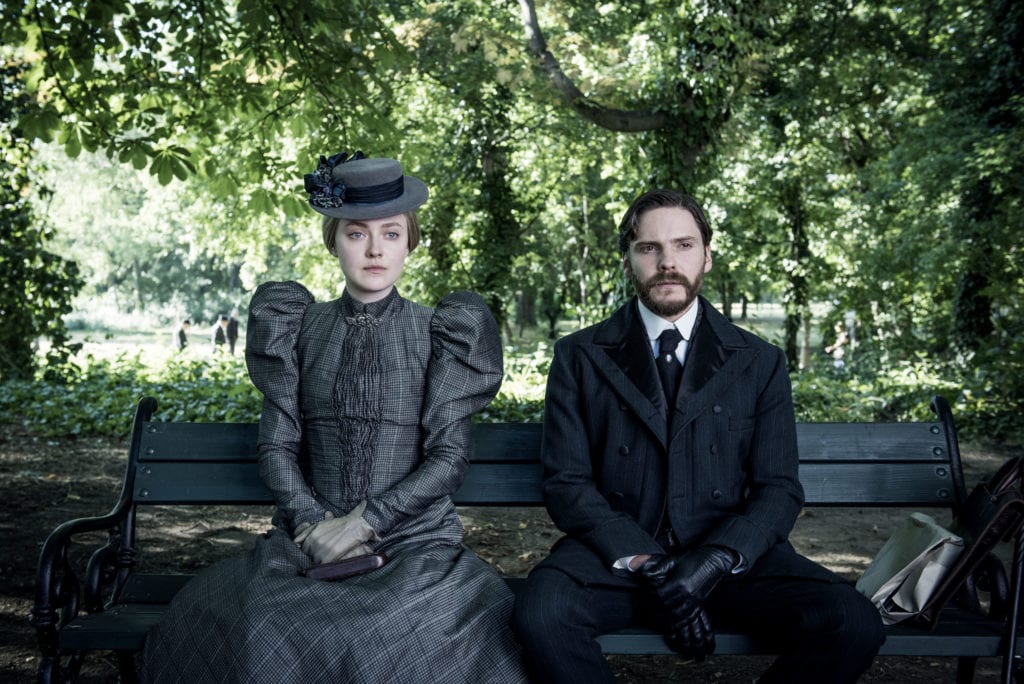 The Isaacson brothers are working hard to recover evidence.  They know the killer can climb to the rooftops effortlessly but, how?  While looking for clues, they discover chiseled holes in the brick walls as well as a piece of climbing apparatus used to puncture the wall.  The killer is a climber!

John Moore meets up with Isaacson to the visit the original brothel building – before the moved across the street.  They look through the rooms and find one with a window.  They run to the roof to look for clues where they find hemp strands from rope most likely used to scale down the building – the same evidence they found at other crime scenes.  While on the roof, they come across a young boy dressed as a girl who tells them about one client who they call a saint.  The saint used to say that he was going to take one of the boys away to a castle in the sky.  In a touching moment, Moore bends down and wipes the makeup away from the boy’s face.  He warns the boy to be wary of a client with a silver smile and to never go with that man if he should ever be approached.

In the next scene, we got our first glimpse of the killer’s face!  We see a man sitting in a dark room and rubbing lotion on his arms.  His body is covered with boils and wounds which we see briefly before he covers his hands with gloves.  We can just barely make out his reflection in the mirror sitting on the table. Just then, a boy prostitute walks in and the man is trying to convince him to leave the brothel with him.

Meanwhile, Moore goes to Kreizler’s house to share with him what he’s learned from his time with the Isaacson brothers and from speaking with the boy on the rooftop, however, Kreizler is not home.  Where is he?  Moore learns that Kreizler is out with Sara and, while doing so, he notices that Mary looks quite sad.  He ends up taking her out to a movie.  Is this a date?

After Kreizler leaves Sara, she makes her way back to the police station where she finds Commissioner Roosevelt.  She builds up the courage to ask about his past with Dr. Kreizler.  The two knew each other in college and ended up getting into a fight.  Kreizler challenged Roosevelt to a dual and when Kreizler took off his shirt to fight, he revealed his arm which was like a broken wing.  Roosevelt took pity on him and could not fight him.  The two haven’t been overly friendly since.  It’s an interesting story and insight into Kreizler’s past though we’re not quite sure what part this plays in the bigger picture just yet. 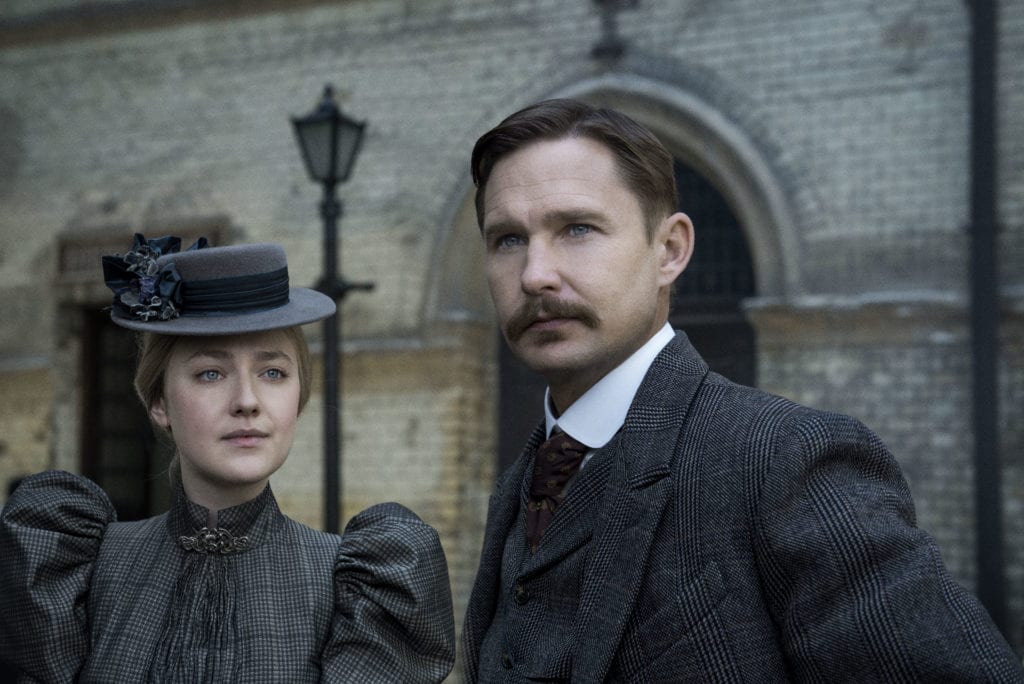 Moore is determined to figure out what causes a silver smile on a person.  He goes to visit a dentist to find out if there is anything medical that may cause such a thing.  He finds out from a patient there that Mercury salts would do the trick and is apparently is a treatment for syphilis.  “One night with Venus a lifetime with Mercury.”   Moore immediately runs to Kreizler with this information and they add the “silver smile” to the evidence board.

Mrs. Santorelli is clearly distraught and is walking down the street crying with a letter in her hand.  Her son begs her not to go to the police.  Could this be evidence?  We’re about to find out!

Kreizler, Moore and the Isaacsons all meet up at a club.  Kreizler believes the Moore invited him there while Moore and the Isaacsons all got calls from Kreizler asking them there.  Something certainly seems off here.  Just then, Sara rushes in with the letter in hand.  She too believes she was invited by Kreizler.  She shows them all the letter which was written by the killer and they figure out it was he who invited each member of the investigative team to the club that night.  The killer is sending a message to them.  He is watching them and knows their every move.  Could it be someone in the room with them right now? 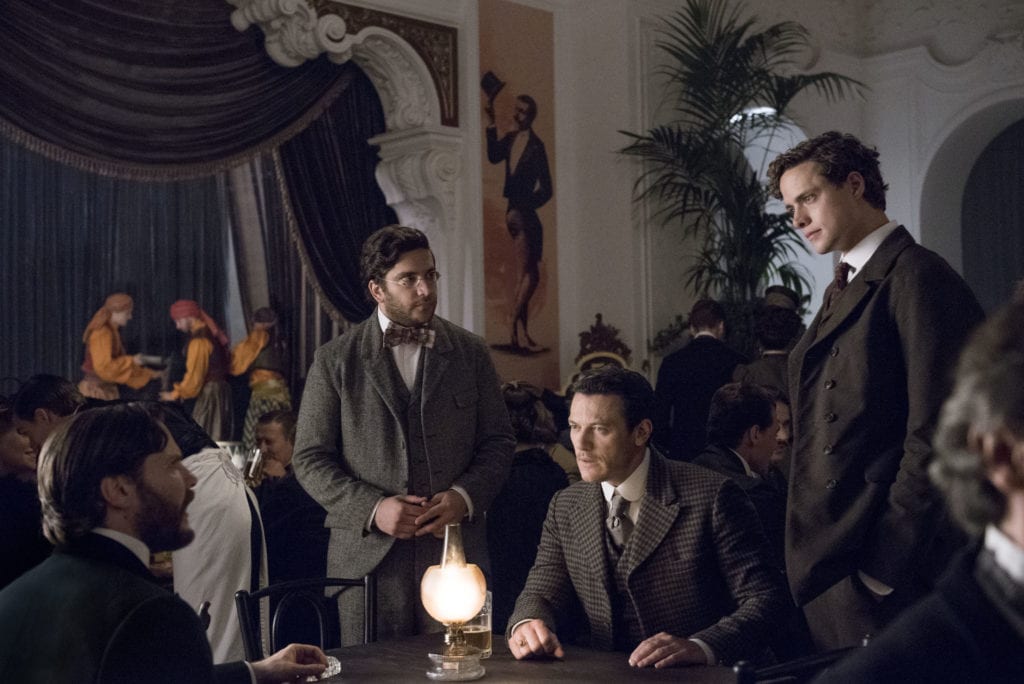 As Kreizler begins to read the gruesome letter in which the killer details eating assorted parts of children,  his reading turns into a voice over while a scene of children in an ice cream shop getting some sweet treats begins to play.  Just then, a man approaches the shop and enters and asks the boys, “which one of you is up for a little fun,” before flashing a silver smile!  We have JUST seen the killer’s face, clear as day, for the first time!

Finally, a face to go with the crimes but, will the investigative team be able to figure out his identity before the man with the silver smile can kill again?

Did you watch Monday’s episode of The Alienist?  What did you think?  Let us know your thoughts in the comment section below.