Spoiler Alert!  The following contains spoilers from episode 1 of The Alienist titled The Boy on the Bridge.

TNT’s psychological thriller The Alienist is off to a strong start!  Based on the Anthony Award-winning international bestseller by Caleb Car, the series takes place in 1896 New York City where a grizzly murder has just taken place.  The body of a young boy prostitute is discovered on the unfinished Williamsburg Bridge by a roaming police officer.

When criminal psychologist/alienist Dr. Laszlo Kreizler (Daniel Brühl) is informed of the gruesome murder he immediately enlists the help of newspaper illustrator John Moore (Luke Evans) in order to get a detailed image of what the crime scene looks like.

Moore is plucked from his nighttime activities (role-playing with a prostitute) and is taken to the murder scene.  When he arrives, he’s not prepared for what he sees but does his best to capture the image of the crime scene as Kreizler instructed.  The scene he draws shows a horribly mutilated young boy suggestively dressed in girls clothing.  This is an image that will stay with Moore for the rest of his life amongst the other demons that seem to be plaguing his character already.  We don’t know exactly what those other demons are just yet but, he certainly seems to be a broken man.  But I digress.  Back to the plot of the episode.

Kreizler needs more information.  He visits the suspected murderer who is already in jail for other crimes.  After interviewing the suspect, he determines this is not the killer they are after.  He and Moore believe that a file from the police station regarding the murders would help them prove their theory.  If they could just get their hands on the forensic evidence!

They drop by the police station to pay a visit to the newly appointed commissioner Theodore Roosevelt (yes, that Theodore Roosevelt played by Brian Geraghty).  They pitch their theory, that the same killer is responsible for the multiple murders of young boys but that it’s not the man who police have behind bars.  They request access to the forensic files for those cases but are turned down by Roosevelt.  As such, Moore sets out to enlist the help of a long time acquaintance Sara Howard (Dakota Fanning).  She is the first female employee of the New York City police department and Moore is asking her to lend them the file.  Howard has no intentions of jeopardizing her position at the police station by stealing official police property, even if it means helping Kreizler.

The young boy who was killed worked as part of a brothel which, according to police commissioner Roosevelt, is to be shut down in light of the horrific events.  Though they tell commissioner Roosevelt that they will comply with his orders, all they actually do is move their operation across the street, continuing to put the lives of the young boys there in danger.  Captain Connor (David Wilmont) and the police force look the other way and allow the operation to remain open.  Perhaps this is just a glimpse of the corruption that exists in the city right now.

After much thought and after staring at the gruesome illustration of the crime scene which Moore left with her, Howard has a change of heart and provides Moore and Kreizler with the file in question.  Unfortunately, the file reveals nothing – no information relating to the types of wounds found on the victims or the types of evidence recovered.  It’s a dead end.

Desperate times call for desperate measures.  Kreizler exhumes the bodies of two buried victims in hopes of closely examining the wounds and marks left on the remains.  Commissioner Roosevelt has agreed to lend Kreizler two men to help with his investigation – Lucius (Matthew Shear) and Marcus (Douglas Smith) Isaacson.  The pair begins to meticulously examine the remains. 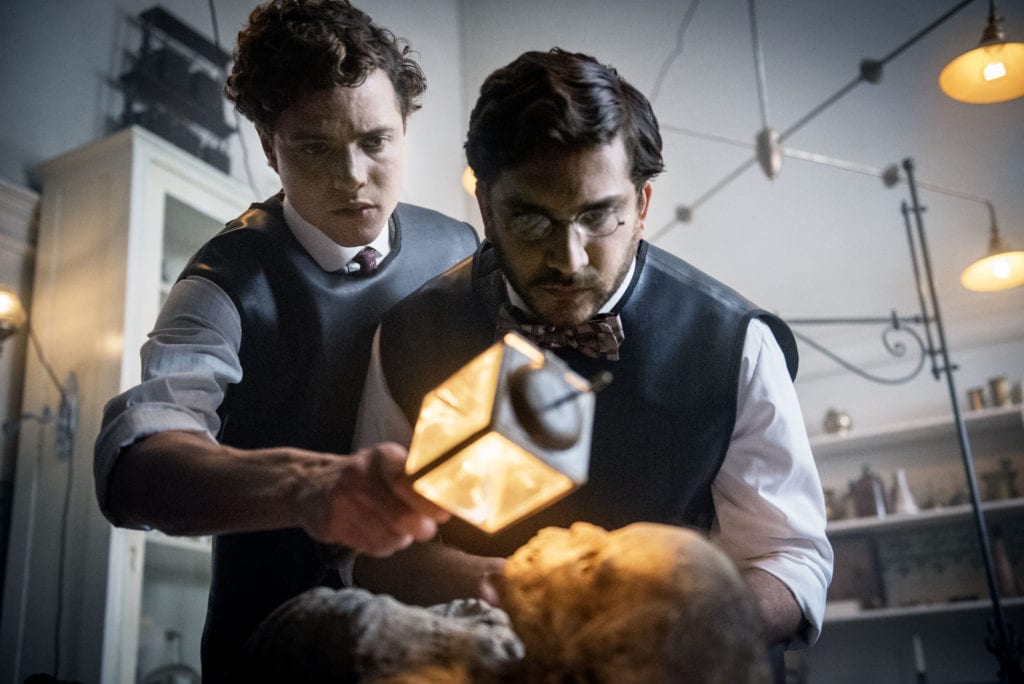 While the Isaacson’s do their job, Kreizler and Moore step out to grab a bite to eat.  As they are about to get into a stagecoach, Kreizler discovers a bloodied, crumpled up piece of newspaper and, upon opening it up, looks shocked by what he’s found.  Just then, a dark, mysterious figure catches his eye across the street.  Kreizler runs off to follow the figure with Moore left straggling behind, unaware as to what is happening.  Kreizler follows the figure into an abandoned building but the figure is nowhere to be found.  When Moore finally catches up with him, Kreizler reveals what was wrapped up in the newspaper – a human tongue.  It’s then that Kreizler vows to solve this murder by any means possible.  Even if it means entering into the mind of the murderer himself.

The first episode ends with a shot of a young boy being approached in an alleyway by what we can only assume is the murder which Kriezler is chasing!

Talk about a crazy and intense first episode!  Did you watch the premiere of The Alienist?  What did you think of the first episode?

The Alienist will air Monday nights on TNT at 9 PM EST for a limited 10-episode series.

Home » Featured » ‘The Alienist’ Episode Recap – ‘The Boy on the Bridge’