The newest episode of The Alienist takes two steps forward and one giant leap back in the murder investigation of Giorgio Santorelli.  When the episode begins, John Moore appears to be still in the brothel with Sally.  He calls to Sally who slowly turns around revealing the face of the mutilated murdered boy.  This nightmare is more than enough to jerk Moore awake from his drug-induced coma.  He finds himself safe in Laszlo Kreizler’s offices surrounded by Kreizler, the Isaacson brothers and Sara Howard.  He remembers very little of last night but, he does remember meeting Sally and that she said Giorgio Santorelli was very well-liked with their clients.  Everything else, at this point, is a blur.

Moore musters up the energy to head home where he is instantly met by his grandmother.  She is pressuring him to find a girl, marry her and settle down (typical granny).  She wants to set him up with someone though, he seems less than interested in that happening.  Clearly, there’s something in Moore’s past relating to love that we haven’t learned yet but, if you ask me, I agree with Kreizler.  He definitely seems to have an affection for Sara but, more on that later on!

Kreizler and the Isaacsons are examing a fingerprint found at the scene of one of the murders when they notice some gaps and spaces on the print.  This could indicate cuts or a skin disease which alters the print but which would also be a unique characteristic of the murderer.  Kreizler asks the Isaacson brothers to go to the morgue and search Giorgio Santorelli’s body to see if the same marks exist.  If they can find a print from his murder, they may be able to match it to the print the already have which would finally connect the two crimes! 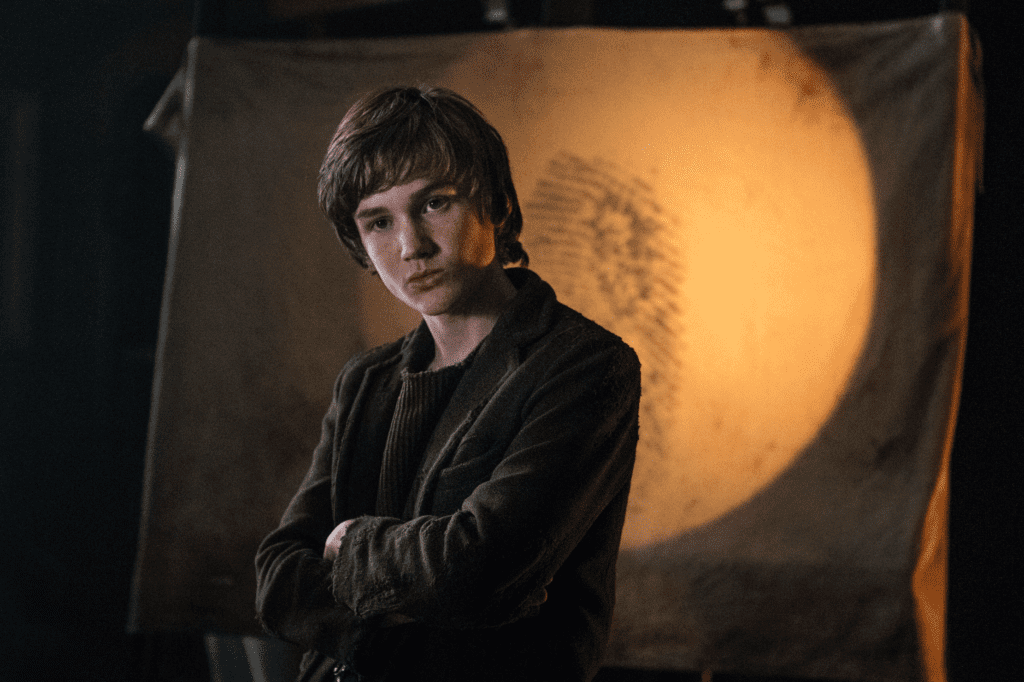 At the morgue, the Isaacsons discover the body of Giorgio Santorelli is missing.  Sara knows exactly what’s going on and immediately flags this as clear and apparent police corruption.   She tells Kreizler that she informed Roosevelt of this matter.  She says that he will now trust Kreizler more than anyone else within the police department.

Meanwhile, the murderer (we think?) is setting up for his next kill.  He’s hanging out at a pool/bath house which is filled with boys. We see a close up of the killer’s eyes as he breathes in deeply when a young boy passes right by him.  It’s about to happen again!

This episode focused a little more on personal lives as well as the ongoing investigation.  Sara attends her college reunion and finds out she’s the only one left from her Vassar class that is still unwed.  Meanwhile, Moore meets his blind date (we can assume this was set up by his Granny) and it goes pretty terribly.  He has absolutely no interest, however, after the meeting is done, he retreats to his room with a glass of wine.  It’s then that he notices a bird on the window sill which flies away and suddenly, Sally’s words come rushing back to him. 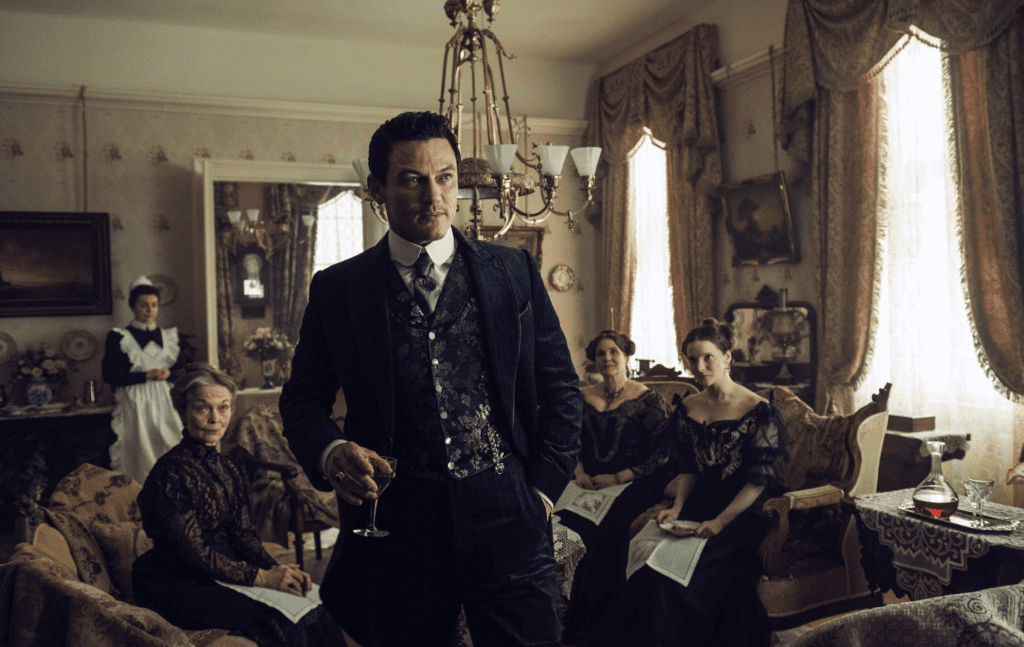 Moore runs off to meet Kreizler to tell him that Sally spoke of Giorgio’s client with the silver smile and that they never left the room the night he died.  Giorgio flew away even though he didn’t have wings so, it would appear the two, his client and Giorgio, left together, without a struggle.  After speaking with Sally for himself, Kreizler believes that Giorgio may have been killed by someone he trusted.

Kreizler is thinking things through and ends up having an intensifying conversation with Cyrus which then leads to a strange encounter with Mary. During his chat with Cyrus, he notices there is blood on his shirt.  He retreats to his room to take it off when he and Mary have an intense moment.  The two stare deeply at each other when that moment is interrupted.  There’s been another murder and Kreizler must go to the scene.

Kreizler, Moore and Sara race to the scene of the murder where they meet Roosevelt.  He has agreed to hold back alerting police for one hour so the team can inspect the scene first.  Sara is clearly, visibly shaken by what they discover – another young boy, mutilated and murdered but time is running out as Captain Connor has just been alerted and is on his way to the scene.

Roosevelt is holding off the press outside of the building where the murder took place while the Isaacson brothers determine that the same knife was used to remove this victim’s eyes as well.  Sara needs to take a step back and Moore follows to console her.  While doing so, she makes some remarkable revelations.  All murders have a connection of heights and possibly water as well.  While the first few victims were hidden, the last two were left in plain sight suggesting the murderer has evolved.  Another fingerprint is found on the body and they try to capture it as best they can for evidence.  Just as they do so, Captain Connor shows up and the investigation must disband. 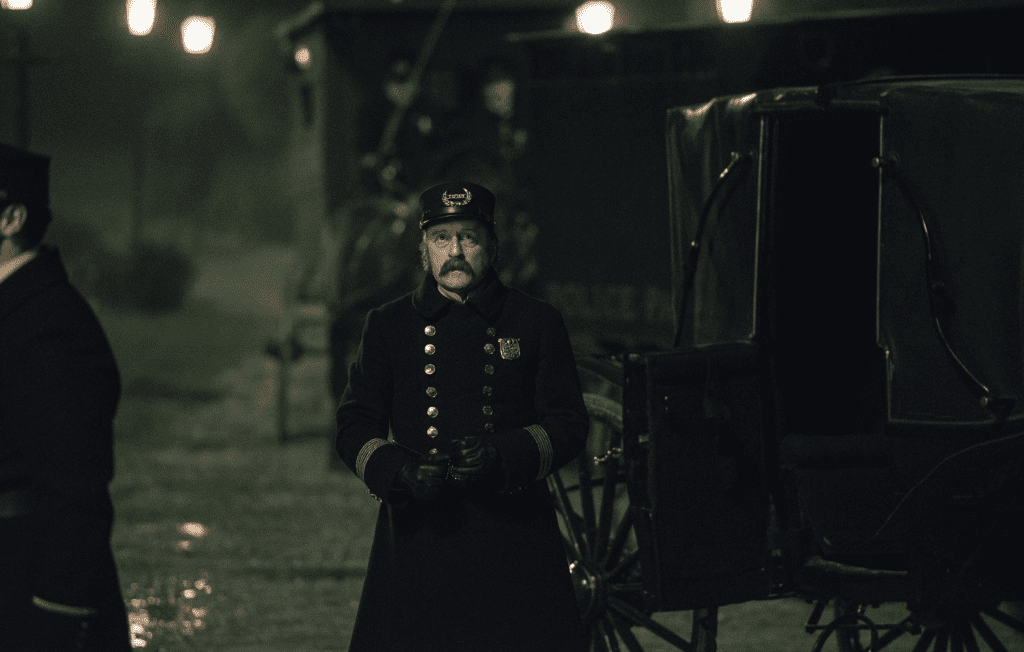 As they are fleeing the scene, they inadvertently leave something behind.  It’s Moore’s sketchbook!  The killer, who had been lurking in the shadows mere feet away from them this whole time, finds the book which contains all of Moore’s drawings of the murder scenes.  The killer has heard everything they discussed so, now what happens?

Back at Kreizler’s place, his obsession hits a new high as he pushes Moore and Sara to dig deeper within themselves and to try to think like the killer.  As he starts to focus on tragedies in their pasts, Moore cuts him off and leaves with Sara.  On their way home, there’s a bit of a flirtation and Moore decides to “go for it.”  He leans in and kisses her on the cheek which totally shocks her.  She doesn’t react – at all! 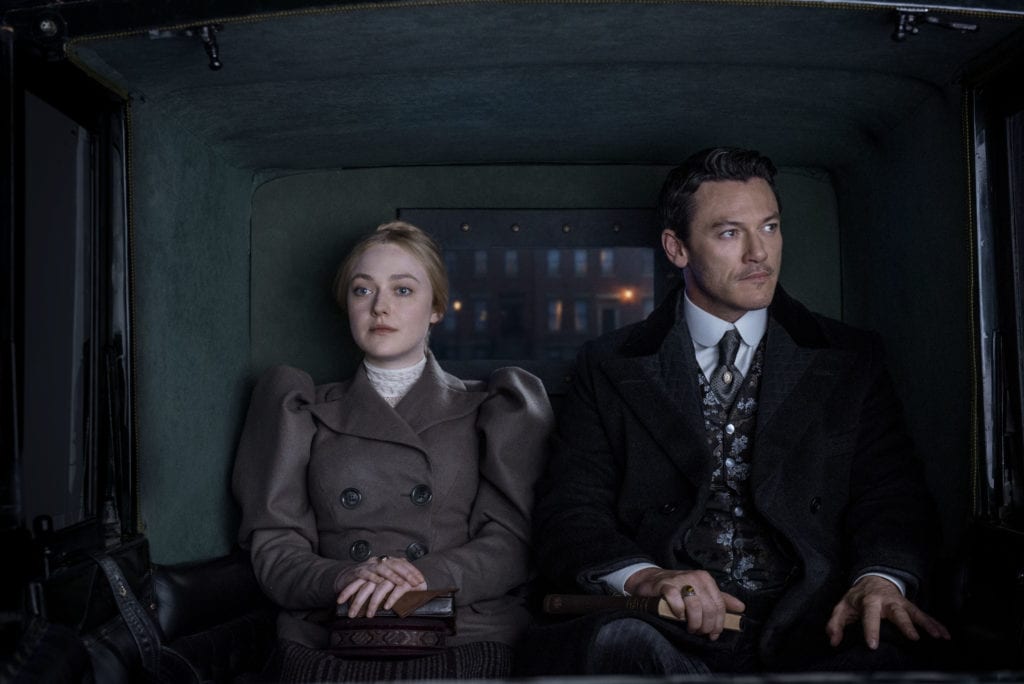 When the slightly embarrassed Moore arrives home, he discovers that the sketchbook is gone.   The episode closes with a disturbing scene of the killer with Moore’s drawings.  He clearly likes what he sees in them, pleased with his own work and the screen cuts to black.  So creepy!

This episode was jam-packed with action and information and the investigation will only intensify from here!  Did you watch Monday’s episode of The Alienist?  What did you think?  Let us know your thoughts in the comment section below.

‘The Alienist’ Episode Recap – ‘The Boy on the Bridge’