“In the 19th Century, persons suffering from mental illness were thought to be alienated from their own true natures.  Experts who studied them were therefore known as alienists.”

For weeks now, Dr. Laszlo Kreizler, John Moore, Sara Howard and Lucius and Marcus Isaacson have been hot on the trail to tracking down the vicious murderer and this week, they continued on that journey though, we learned in this episode of The Alienist, nothing is exactly what it seems to be.  Last week, we actually got to see the man with the silver smile but, we all should have known that it’s too early to reveal the true killer.  There’s much more to this case than we originally thought and this episode revealed some twist and turns that will set up the second half of the series.

When the episode starts, we find out team examing fingerprints pulled from Mrs. Santorelli’s letter which she received from the killer.  They find a print which matches evidence from their previous cases and also begin to analyze the handwriting.  Through their forensic analysis, they place the suspect at somewhere between 24 and 35 years of age with a violent history.  As they begin to piece together the past life of their culprit, Dr. Kreizler pretty much loses it when Sara suggests a negative influence in the killer’s past could have been a dominating mother.  Kreizler snaps and yells saying that if a woman had been dominant in his life, the killer wouldn’t be the way he is today.  Kreizler yells and throws objects across the room in a fit of rage (clearly remembering something from his own past and projecting those feelings outward) which causes Sara to storm out.

Moore follows her trying to smooth things over and, while he tries to get her to come back to the house, he ends up flirtatiously proposing to her.  In the middle of the street while getting his shoes shined, he adorably asks her to marry him.  Sara laughs it off but kind of gives him an opening.  She tells him that if she thought he was being serious, she might actually consider it.  We then see a drastic change in Moore’s attitude.  His disposition becomes serious and he asks her again, in an earnest tone.  Of course, she doesn’t answer because her carriage arrives but, that little opening that she might have answered with a “yes” is all Moore needs to begin changing his ways.

This becomes apparent when Kreizler and Moore take a day trip to visit one of Kreizler’s former patients, Jesse Pomeroy aka. The Boston Boy Fiend.  On the train ride to Boston, though he’s clearly unsettled and nervous about their destination, Moore reveals that he’s quit drinking – influenced by Sara, no doubt.  When the two arrive at the jail, they find Jesse in a back cell chained to the ceiling.  Kreizler begins talking with him, trying to get him to confirm reasons why he killed the boys that he killed, Jesse breaks down crying.  He says his father left him at a young age and his mother never truly cared for him.  As Kreizler moves closer to console the sobbing man, Jesse begins laughing just before lunging towards him with a sharp object.  He tells Kreizler that no one will ever know why he killed those boys.  This visit has been all for naught. 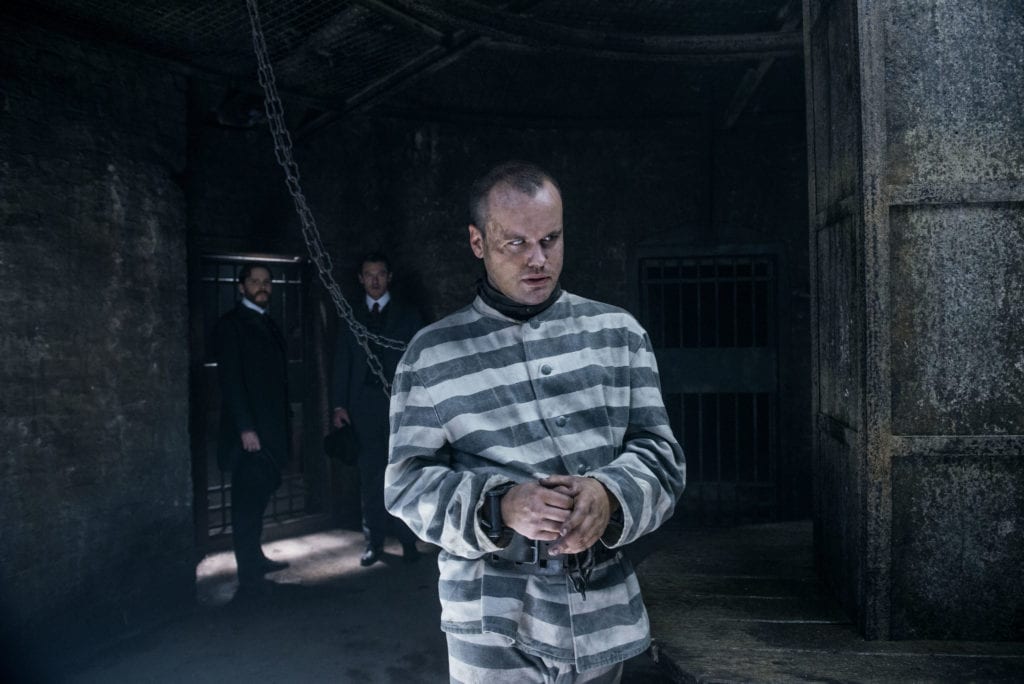 While the boys are off playing with convicted murderers, Sara is back in New York and continues her diligent investigative work.  She finds information that may be of use to Kreizler and brings them to him during dinner.  The two exchange what can only be described as some flirty verbal foreplay before getting down to business and discussing the new information Sara has found.  She reveals that the police have found a suspect, however, all names have been removed from police records except for one – Bishop H. Potter.  Bishop Potter, it seems, was involved in covering up one of the past incidents and, naturally, Kreizler thinks he would be a good person to interview.

She also finds police records of similar incidents in the past and brings them to where Kreizler is having dinner. Once again, he invites her to sit with him, and they commence what constitutes flirting for alienists before finally discussing the case. The police have a suspect, and Howard’s brought along the files she found. The name has been redacted in all of them, but one name remains: Bishop H. Potter was involved in the cover-up of one of the incidents.

When Kreizler visits Bishop Potter, is then that we learn nothing is as it seems!  Kreizler brings the police report to the Bishop and, while starting to discuss the case, the Bishop lets slip the last name of the suspect – Van Bergen!  This should be all the evidence that Kreizler needs to report back to Roosevelt but, something with the story just doesn’t add up.  On his way out, Kreizler notices a calendar hanging in the church.  He pieces together that the murders are all occurring on Christian holy days.  He has a flashback to his own past and also realizes they aren’t looking for someone who came from a privileged background after all.

We see a scene of Willem Van Bergen with a young boy while, at the same time, Captain Connor and Commissioner Roosevelt set out to the address which Connor has uncovered.  It’s a tense scene as the police are racing towards Van Bergen who seemingly is about to commit another murder.  Roosevelt reaches the door and knocks at the same time there is an unexpected knock on Van Bergen’s door.  Just as it seems that Van Bergen has been caught, we find out that Roosevelt has been duped by Connor.  The address he was given was fake and the knock on Van Bergen’s door was that of his mother (played by Sean Young). 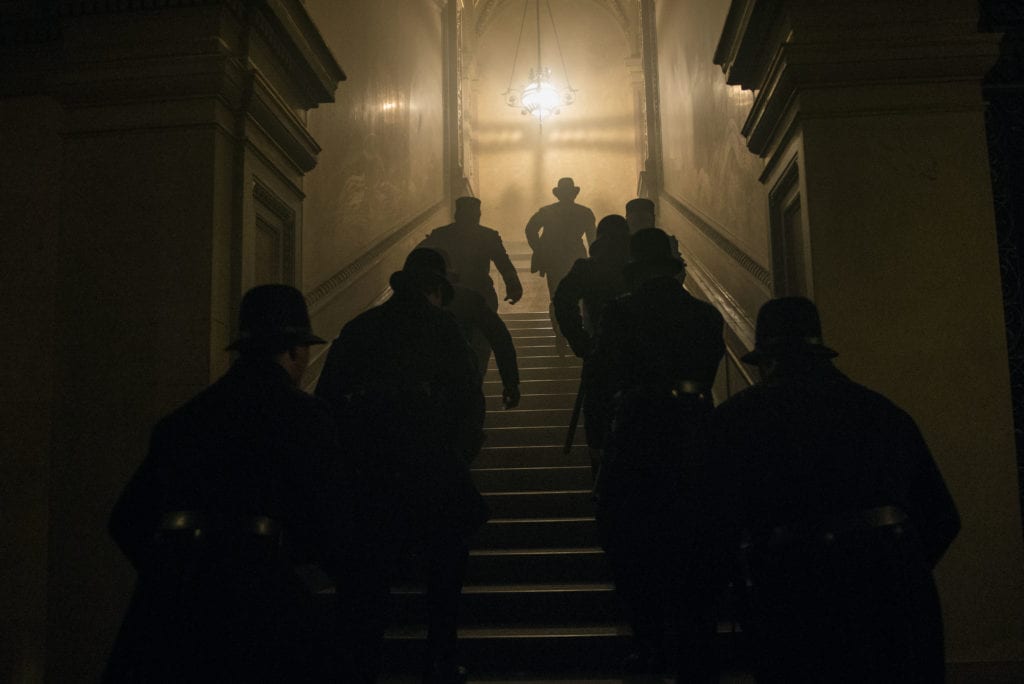 Van Bergen’s mother is clearly a dominant influence in his life.  Perhaps Sara was right.  Though Willem may not be the killer, there is still something about him that needs to be uncovered but now, Roosevelt has proof of Connor’s corruption.  Clearly angered by the deliberate misdirect, Roosevelt strips Captain Connor of his badge and his gun and leaves him disgraced in the middle of the pouring rain.

The episode ends with Kreizler and Moore looking through Christian holy days and piecing that theory together.  The find out that the next holy day is only a few days away.  If the killer follows the Christian calendar, he will strike again in just a few days from now!  Time is running out!

Did you watch Monday’s episode of The Alienist?  What did you think?  Let us know your thoughts in the comment section below.