Spoiler Alert!  The following contains spoilers from episode 6 of The Alienist titled Ascension.

“In the 19th Century, persons suffering from mental illness were thought to be alienated from their own true natures.  Experts who studied them were therefore known as alienists.”

This week’s episode of The Alienist is a race against time!  Dr. Laszlo Kreizler and John Moore believe they have figured out a pattern to the murderer’s killing habits.  He seems to strike on holy days corresponding with the Catholic calendar.  The next holy day is the Feast of Ascension and it is just days away.  The investigation team has formulated a plan to try to trap Willem Van Bergen (their suspect who Kreizler really thinks isn’t the suspect) but first, they need some help from Commissioner Roosevelt.

Moore, Sara Howard and the Isaacson brothers are all preparing at Kreizler’s place.  The group invited Roosevelt as well in order to fill him in on their police department needs (or lack thereof).  Their plan is brilliant.  They will dress up Stevie as if he were one of the boy prostitutes and use him to lure in the murderer while splitting up into teams and watching from afar to ensure Stevie is safe.  The Isaacsons are running the operation with the watch teams consisting of the two brothers, Moore and Cyrus.  Kreizler, because of his disabled arm and Sara because they believe her to be, “the weaker sex,” will not partake.  Yes, they really said that and no, Sara was not happy about it.  Reluctantly, Roosevelt agrees to their plan.

While walking the streets and preparing for their plan, Moore finds Joseph, a young boy prostitute whom he has encountered before.  He warns Joseph that the killer may strike tonight and that he should stay in his room with the window locked.  Moore urges him to tell the other boys in the brothel to do the same.  Hopefully, Joseph will listen! 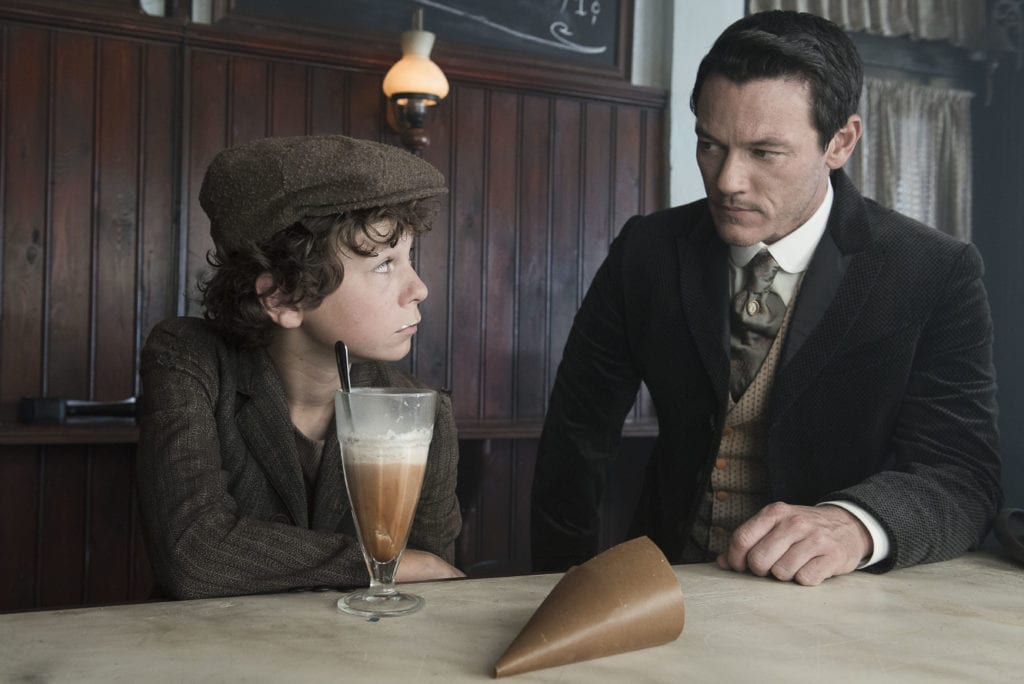 The night is beginning to fall and the investigation team is ready to run with their honeypot plan.  With the watch teams in place, Stevie is ready to hit the streets as “Stella” in order to try to lure the suspect.  He has several men stop by but none of them act according to the profile of the killer and none of them are Van Bergen.  The plan has failed and Laszlo is beginning to doubt his theory about the killer following holy days but Sara is not so quick to give up. The next holy day is just over a week away and she suggests they wait until then and try the plan again only this time, Stevie will be inside a room at the brothel.

Roosevelt and Moore attend an event together when Roosevelt is approached by J.P. Morgan.  Morgan tells him that he’s spoken with Bishop Potter and that he knows Laszlo has been snooping around the church asking about Van Bergen.  It’s then that the corruption of the city rears its ugly head.  Morgan threatens Roosevelt saying the Van Bergens are the ones who got the mayor elected and that the son is being shipped off to another country.  He will no longer be a problem and Roosevelt better watch his step or he’ll be without a job.

Roosevelt goes to see Kreizler to tell him about what Morgan said though he seems to be a bit more interested in the profiling of the killer.  He asks Kreizler what would compel a man to commit such acts.  Is the killer disturbed and acting irrationally or is he just the same as they are – sane and there is a method to his madness.  Kreizler responds by saying, “Those who are seen dancing are thought insane by those who cannot hear the music.  It’s just a matter of finding a way to hear the music.”

Meanwhile, Sara appears to be conducting her own side investigation but it has nothing to do with the case.  She’s digging for dirt on Kreizler and she’s discovered something juicy.  She comes to visit Moore to tell him what she’s found out and, after some expected flirtations, she shows him an old newspaper column.  The column tells of a young Laszlo entertaining a crowd with a complicated Mozart piece on the piano.  Moore is confused as to the significance of this article until Sara tells him it’s a piece that cannot be played with one hand.  Kreizler has always said his arm was a result of a congenital defect is something he’s had since birth, however, if he was an accomplished pianist, then he has been lying!  What is Kreizler hiding? 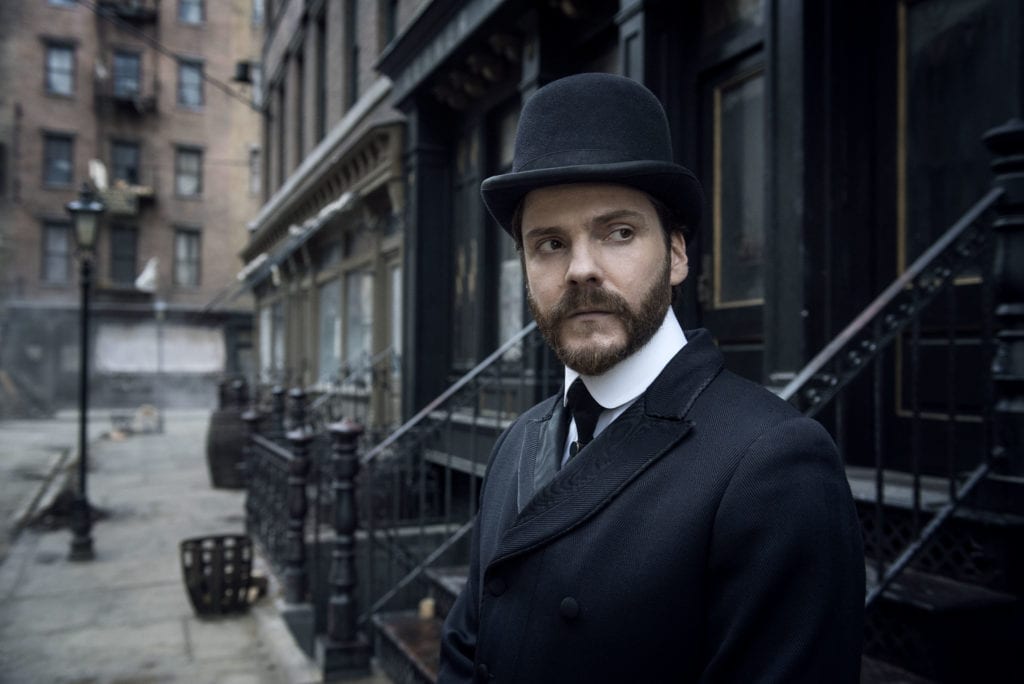 Earlier in the episode, Mrs. Van Bergen was speaking with her son, our murder suspect, about shipping him off to Buenos Aires in order to protect him from the police investigation.  He is adamant about not going but his overbearing mother insists.  Eventually, Van Bergen seems overcome by his urges.  He can’t take it anymore, pounds down some liquor and heads to catch a water taxi back to the city.  Captain Connor is alerted and he sets off to follow Van Bergen.  Connor catches up with him in a dark alleyway and Van Bergen begins to run.  Connor and his sidekick run after him eventually cornering him up in the rafters of a building.  If Van Bergen takes one step farther, he’ll fall to his death into the bay.  Connor calls him a degenerate and a dirty sodomite.  Though Van Bergen pleads, Connor raises his gun and shoots hitting him directly in the forehead.  They wrap up the body and dump him into the bay.

The team tries, once again, to lure in the killer.  Stevie has dressed up again but this time inside the brothel with Moore and the Isaacsons keeping watch from inside the room.  Joseph finds Moore and the two begin to talk while another boy prostitute is chatting up the Marcus.  While the two are distracted, a man approaches Stevie.  He fits the profile and promises to take Stevie (aka. Stella) away from there to a castle where they can be together.  Frantically, Stevie flashes the signal that he is in trouble but Moore and the Isaacsons are still distracted and just miss their moment.  Moore notices Stevie’s terrified look as the killer is walking away.  He shouts and begins to chase him down.  Marcus follows the killer while Moore runs to get Kreizler.

Kreizler is completely unaware of all the commotion going on because he and Sara are having an argument in the middle of the street.  Their argument comes to a screeching halt when Sara calls him a coward for lying about his past while pushing them to confront theirs.  Kreizler abruptly slaps her right across the face! 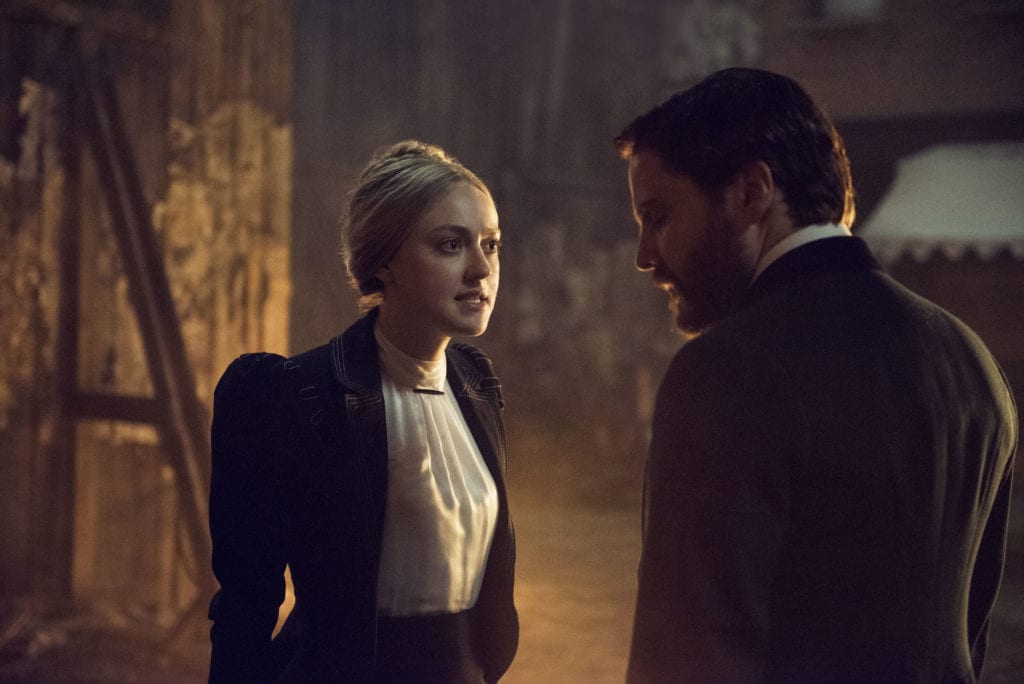 Essentially, the entire sting operation falls into shambles.  Their last hope is that, maybe, just maybe, Cyrus saw something from the rooftop perch where he stood keeping watch.  When they reach him, they find him unconscious on the floor.  The killer has gotten to him too.  Their brilliant plan is a failure.  Whatever could go wrong has gone wrong and the killer escapes their grasps once again, however, he didn’t go too far.

They notice an open window in the brothel next to the room occupied by Stevie.  Moore had warned the boys to keep all windows closed but, someone didn’t get the message or didn’t listen.  The episode ends with a close-up shot of another murdered and dismembered child – this time, laid out at the base of the Statue of Liberty.

After this massive failure of a plan, what’s it going to take to catch this killer?  What did you think of this Monday’s episode of The Alienist?  Let us know your thoughts in the comment section below.