Spoiler Alert!  The following contains spoilers from episode 2 of The Alienist titled A Fruitful Partnership.

The investigation into the gruesome murders plaguing New York City really heats up in the second episode of TNT’s The Alienist.  While Dr. Laszlo Kreizler (Daniel Brühl) is looking everywhere for clues and leads (including a creepy morgue), Captain Connor pays a visit to the Santorelli family (the parents of the murdered boy prostitute named Georgio) and, let’s just say it wasn’t a friendly visit.  Captain Connor threatens and beats the murdered boy’s father telling him to keep his nose out of police business.  Something definitely isn’t right here!  Why is Connor trying to keep this murder under wraps?

Upon his return to the police station, Captain Connor tells Sarah Howard (Dakota Fanning) that the boy’s parents weren’t able to provide any information relating to the murders.  It seems he was supposed to simply be interviewing them, however, the blood on his hands shows that’s not the case and Sarah notices. 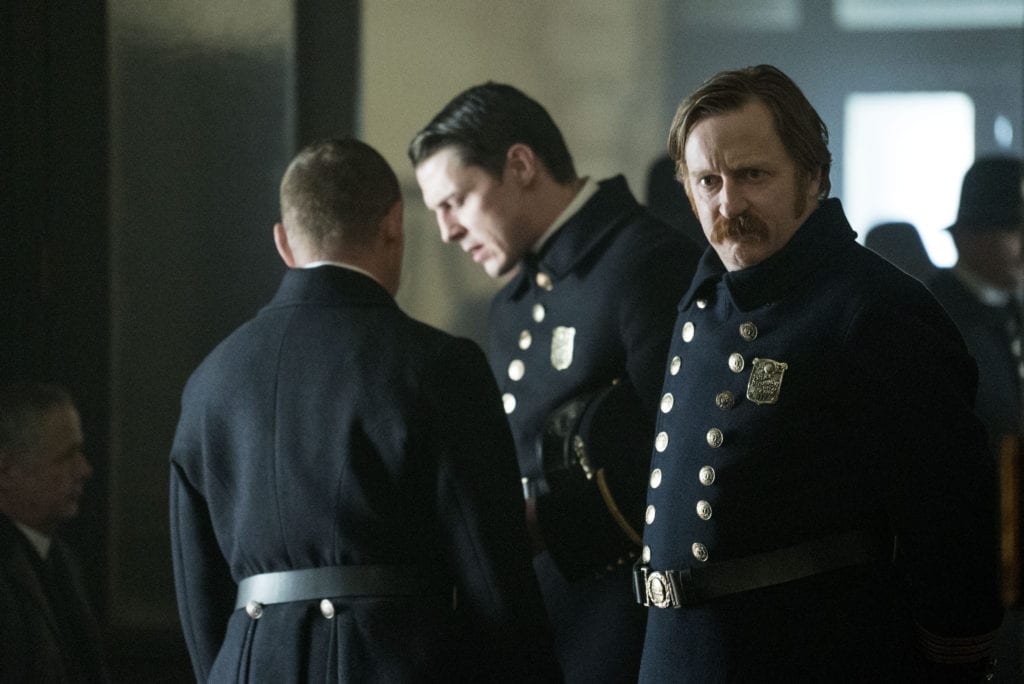 She enlists the help of John Moore (Luke Evans) and the two venture off to visit the Santorelli’s house.  They find Mr. Santorelli nearly unconscious, beaten and bloody.  In speaking with his son, they learned that Captain Connor was involved in the beating and that in fact there have been other murders of young boys.

Sara takes this information and runs with it.  She goes to the section of the police department which houses the unsolved murder cases.  When she locates the draw for unsolved murders involving children, she finds nothing.  Putting her career on the line, she sneaks into Captain Connor’s office, breaks into his desk and uncovers a treasure trove of unsolved case files all involving young boys.

She and Moore bring this information to Kreizler but, it appears to be a dead end.  The bodies are not reachable and cannot be examined but Kreizler seems to have something up his sleeve.  He has arranged for them all to meet for dinner but what exactly is Kreizler planning?

In a truly creepy and out of sequence scene, a young boy is approached by a man who is not shown on camera.  The man tells the boy to come closer to which the boy replies, “What’s wrong with your mouth?”  The man extends his hand which appears to be covered in sores and marks.  Is this the killer we are searching for?

Before dinner, Kreizler and Moore attend the opera but there is more to the visit than just entertainment.  They find commissioner Roosevelt there and approach him about the investigation.  Kreizler asks Roosevelt for the ability to run a parallel investigation with Sara as his police liaison.  Roosevelt does not immeidately answer. 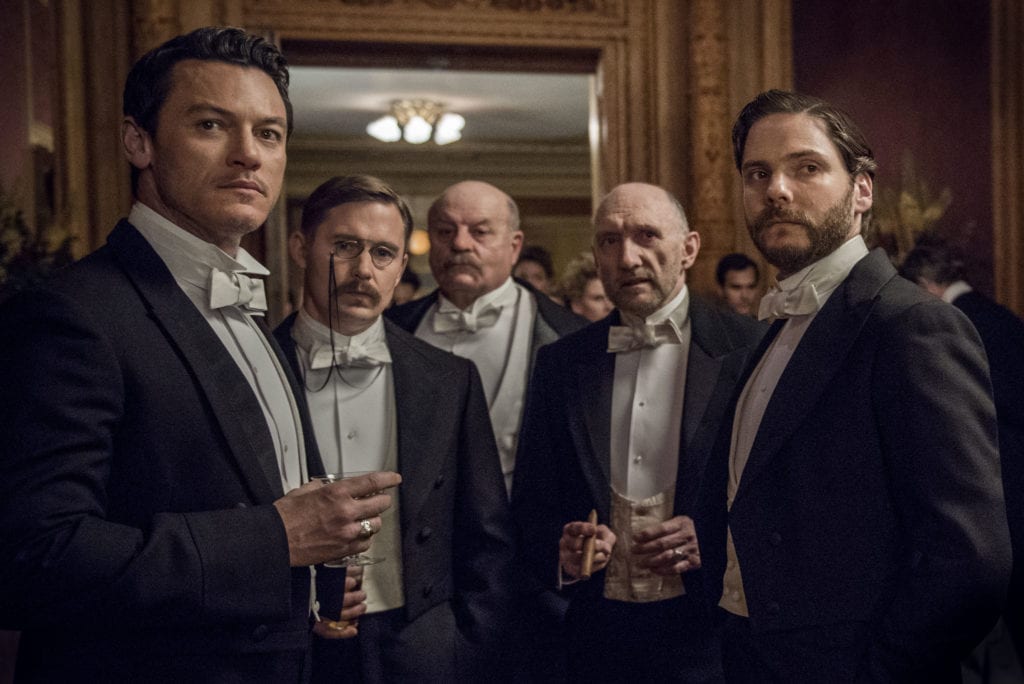 The Isaacson brothers, Kreizler, Moore and Sara all meet for a private dinner at a fancy restaurant.  It’s the first time the entire investigation team is all in the same room together and, it’s critical that Kreizler gets everyone’s buy-in to move forward.  During dinner, the Isaacson brothers reveal they have been using pretty sophisticated forensic skills.  Earlier, the duo recreated the eye-gouging part of the murder in order to examine the marks left by different weapons using the head of a cow (or a horse or some type of large animal).  They found a match for the markings – an Arkansas toothpick.  In addition to finding what they believe to be the murder weapon, they also introduce the idea of fingerprints to the team.  This was truly a revolutionary method as fingerprints or “finger marks” as they called it, were not yet used in forensic science.  The Isaacson brothers did find a finger mark which could belong to the killer left on a pocket watch belonging to the boy. 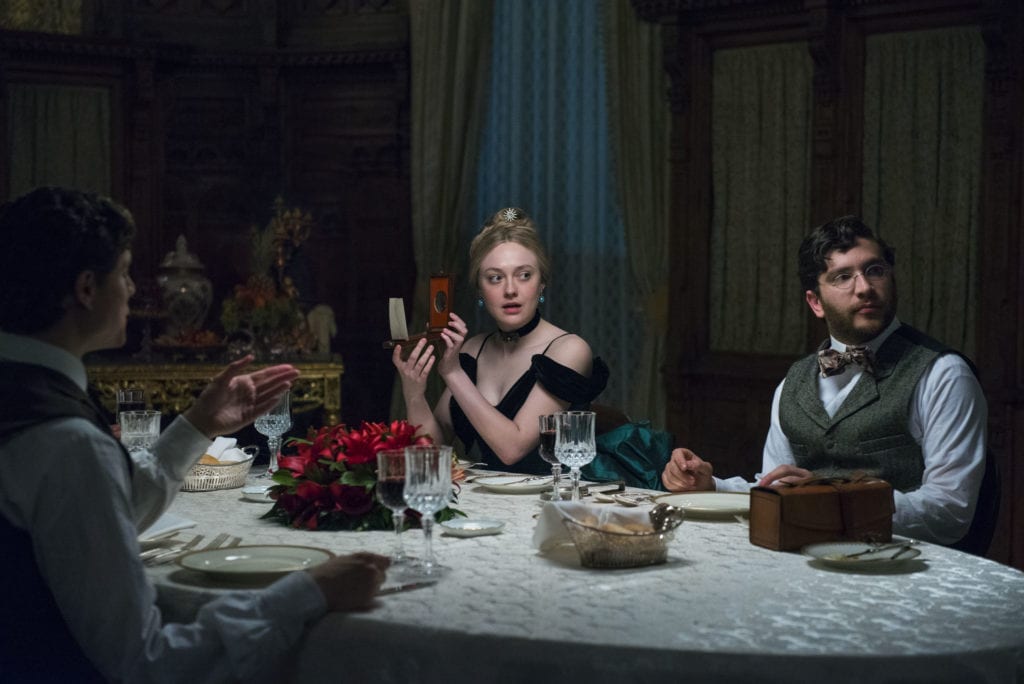 When leaving dinner, Moore and Kreizler get into a bit of a fight over Sara.  Kreizler has been suggesting that Moore might have a bit of an affection for her which angers him for some unknown reason.  Perhaps it’s true?  Regardless, Kreizler tells Moore that he may no longer be needed as a part of their investigation and this angers him even further.  Moore storms off on his own while Sara and Kreizler go into his carriage.  It’s then that Kreizler tells her that he’s spoken with commissioner Roosevelt and asked if she could be his official liaison.  This is everything Sara wanted!  There’s a little bit of flirtatious vibe going on between the two but, Sara is clearly pleased that she will officially be a part of this investigation. 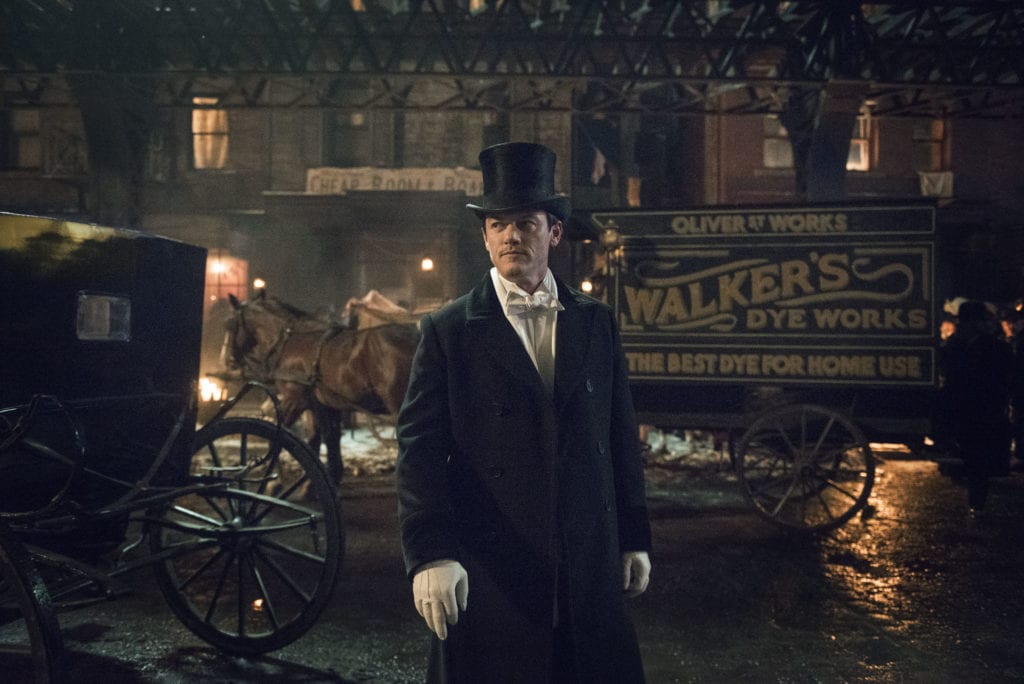 Moore, on the other hand, is not in a good place.  He’s had much to drink and is stumbling around questionable parts of the city.  He finds himself at the brothel where Georgio used to work.  His intent is to get as much information as possible relating to the events that transpired that night but what he gets is more than he bargained for (or that he could handle in his current state).  He starts questioning the men who run the brothel. however, he’s asking too many questions and perhaps getting too close to figuring out the murder.  When he’s not looking, the owner slips drugs into the drink he’s fixing for Moore.  Moore takes the drink, unaware that he’s about to be drugged.

A young boy named Sally approaches and seduces Moore.  Moore follows the boy into a back room where he offers the boy money for any information on Georgio Santorelli (or Gloria as he was known at the brothel).  The boy reveals that Gloria often talked about a client with a silver smile.  On the day that he was murdered, Gloria never left her room.  The door was locked but both Gloria and her client were missing.  Moore accuses Sally of lying but, at this point, the drugs take over and he passed out, almost unconscious, onto the bed.  Sally steals Moore’s wallet and the owners enter the room with Captain Connor.  Moore is helpless and in deep trouble.  Other boys from the brothel are called into the room and begin climbing onto the bed.  The scene ends with Moore desperately struggling to fight back but he is overpowered.

What a cliffhanger of an ending!  What’s going to happen to Moore?  What do you think of The Alienist so far? Let us know your thoughts in the comment section below.

The Alienist will air Monday nights on TNT at 9 PM EST for a limited 10-episode series.

‘The Alienist’ Episode Recap – ‘The Boy on the Bridge’