It’s hard to believe Lola Flanery is just 13-years-old! The 100’s new addition is an already established actress at such a tender age, and has played a queen, worked with an underground angel of death, and has killed three people (on screen, of course) with a spear without even breaking a sweat. At age 13 I couldn’t even manage to pick out clothes that didn’t clash on a daily basis… let alone star in several hit shows, and be a total class act on Social Media while climbing the Entertainment ladder.

Season 5 of everyone’s favorite post-apocalyptic series (which recently received a Season 6 order on The CW) has already had a myriad of new faces, some friendly, some rude, some bloody, and one in particular, who is a total bad*** nightblood. Flanery, known for her roles on Shadowhunters, and Mary Kills People, plays Clarke Griffin’s (Eliza Taylor) surrogate daughter Madi, and has already impressed the viewers with her character’s sharp wit, and cutthroat introduction, when at the age of 6, she strategically hunted Clarke down in the woods and lured her into a bear trap! Ouch! But, these two are totes over their issues, as Madi has become an integral part of Clarke’s life. Not to mention, for six years, they were the only thing each other had in this world. Awww.

So what happens when that mother/daughter dynamic gets a shake-up from the past, with the arrival of old friends, and new foes? Flanery spoke with Fan Fest News about Madi’s perspective on Earth’s intruders, and finally getting to know the people from Clarke’s fairy tales. We discuss the highly-anticipated meeting between Madi and Octavia, or should we say Blodreina, and how awesome it is to read reviews of her performance and the show as a whole.

MCKENZIE MORRELL: Madi’s world is expanding now that the SpaceKru and BunkerKru are on the ground. How do you think she feels, now that all of these people Clarke has been telling her about for six years are in front of her, in the flesh?

LOLA FLANERY: I think that how she meets SpaceKru has a lot to do with her feelings. You see that when she meets Bellamy. I mean, for sure, she is in awe, there he is standing in front of her, but most importantly Clarke needs help. Same for BunkerKru, the circumstances for that meeting will definitely play a part in her feelings.

MM: She immediately recognized Bellamy in the woods, and trusted him to help save Clarke, since Madi is safe with the rest of the SpaceKru, do you think she’s had time to talk to them about what they’ve been up to and all of the stories she’s been told?

LF: Now that Madi knows Bellamy is with Clarke and they have a plan, and a really cool hand signal, I think she is having a full discussion with Monty, Harper, Echo and Emori. I think Madi is telling them all the stories Clarke told her as well as asking them to tell her what’s been happening in space for 6 years!

MM: Who do you think Madi is most looking forward to getting to know? A little birdie told me that her idolization of Octavia might come into a play as the season progresses.

LF: I thought Clarke ate that bird? But yes, Octavia is definitely one that Madi can’t wait to meet based on Clarke’s stories.The stories were more like fairytales and those fairytales were based on Octavia, not The Red Queen! We’ve seen that Madi does have a mind of her own so it will be interesting to see how she views this new Octavia. 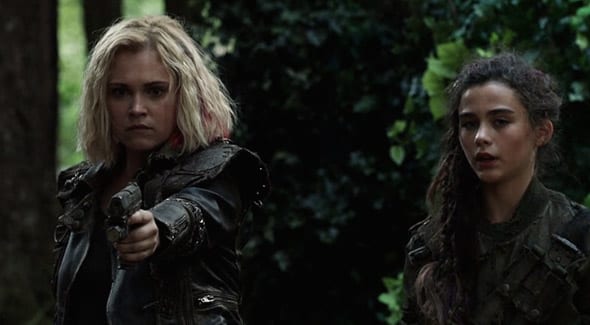 MM: That’s for sure! Do you know Madi’s backstory– before the second apocalypse? Or is that something that you’ve concocted to help you act?

LF: I did have an idea of Madi’s story. I knew about her nightblood and that her parents taught her to hide from flamekeeper scouts so that she wouldn’t be taken to Polis to join the other novitiates and maybe even die in a conclave. That puts a lot of pressure on a kid, so I went into it knowing she wasn’t your average 12-year-old.

MM: She’s a totally a bad***, did you get to do any small stunts, or is it mostly doubles so that you didn’t get hurt?

LF: She totally is right? I have to give a lot of credit to my stunt double. She was awesome! Obviously, she did all the major stuff, and the driving, even though I begged and begged to do it.  I did get to do some cool stuff. I mean we are only a few episodes in and I’ve already killed like 3 people, one of them with a spear.

MM: Girl power! You spent a good chunk of time filming with the lovely Eliza [Taylor] who plays Clarke, was she able to give you any pointers on set, as you navigated the crazy world of The 100?

LF: Yes, I was super lucky because my first episode was shot only with Eliza. I think I was just the right amount of nervous and excited. She definitely made me feel comfortable and I tried to follow her lead. She also started acting around my age so she totally gets what it is like to be a kid on set.

MM: You are extremely active on Social Media, at such a young age– this has to be challenging waters, especially when it comes to (often crazy) people on the internet. Do you have any adults helping you with that? Or have you been able to take the reins and choose what to respond to?

LF: I think that social media can be challenging for everyone really. It’s such a big part of my generation though. All of my friends, whether they are actors or not, are on social media all the time! My mom monitors all my stuff, and if I’m not sure about something I will always ask her but I think I have a pretty good idea about what to do or not.

MM: To go off of the social media question, how have the fans been since your character debuted? I would hope the fans have been kind to you.

LF: The fans have been AMAZING! Everyone has been super positive. I think it has a lot to do with who Madi is to Clarke. Honestly, I feel they love Madi because Clarke does and it shows you how passionate The 100 fandom is.

MM: Speaking of passionate fans of The 100, my writer friend Jen (@CoolHandLukette on Twitter) sung your praise in one of her reviews, she likes to be a little more provocative with her writing, but she gets the point across. How has it been, reading articles that show such huge support of you and the character?

LF: [Laughs] Jen is awesome! I totally remember in one of the first things she wrote it had something to do with kids on shows being like mayonnaise? I love reading all the articles and reviews of the episodes. Sometimes even I read something, and they will have written something about Madi that I never even thought of. It’s pretty cool!

MM: Time to throw in my signature question! Based on your personality in real life, if you were a donut– what kind of donut would you be?

LF: Oh, love this question!  If I were a donut I would be the Birthday Cake donut which is a vanilla glazed with multi colored sprinkles on it.

MM: What about Madi?

LF: I’m pretty certain I can speak for Madi and say she would be a Bear Claw.

MM: To wrap up, do you have anything you’d like to say to the fans as they continue their Season 5 journey?

LF: Get ready! It’s going to be such a crazy ride and I’m so happy to be on it with them!