Sleeping Giants was a tense hour of television which brought us back to the fundamental roots The 100 was built on. Space merging with the ground, and moral dilemmas, oh and of course that epic reunion you all have been waiting for. The episode, which was written by Aaron Ginsburg and Wade McIntyre, and directed by Tim Scanlan, was balanced with unparalleled fights, some super serious conversations, and a wee bit of humor.

It was everything I had hoped for in the third installment of season 5 that would catapult us into the fleeting episodes of this season. Why aren’t there more left? What have we done to only deserve 13 of you precious nuggets?

We interrupt this program for a brief announcement:

… with a season 6! Thanks to The CW’s recent renewal announcement! Our little show that could lives to see another year!

Now back to your regularly scheduled programming:

Clarke is fierce. She didn’t hesitate to use tactics from Season 1, she’s taken what she’s learned from being the outsider on the ground, to its sole (with Madi) inhabitant and protector and applied it where necessary. The way the Grounders used Jasper as bait way back when, tying him up, sending a message, is exactly what Clarke did with the prisoner from the transport ship. Not to mention, that whole “maybe she doesn’t speak English” bit… totally taken from Lincoln’s book from way back when. RIP. 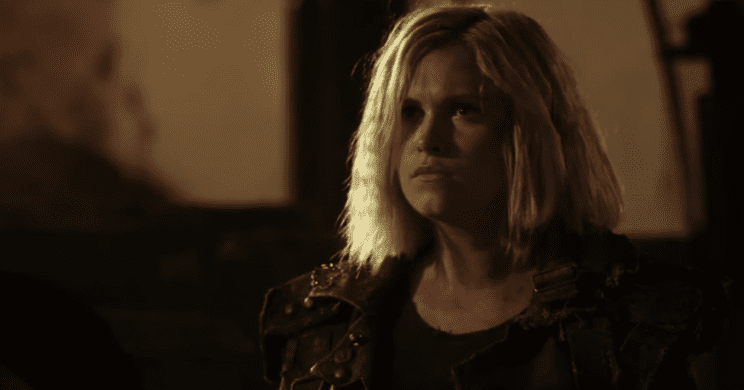 Everything Clarke did felt familiar, yet new. The parallels we’re seeing between Diyoza approaching Clarke with negotiations reminds the audience of how Clarke used to be with the grounders. Diyoza is smart enough to figure out that Clarke can speak English, and it’s merely a tactic to track their movements and protect someone else in the woods. Something that Clarke and co. didn’t really realize until much later in the breaking Lincoln process. Clarke’s strategy, although faulty, was semi-effective in the beginning and even made the prisoners think that she wasn’t alone on this planet. Unfortunately, her cunning ways came up short and she was forced to speak and work at Diyoza’s mercy.

The audience is continually plagued with questions. Who are these people? What is their endgame? Will Madi survive the violence? What happened to our planet right before the world ended, the first time? Diyoza mentions fascists… but, to what extent. Where are all the other women besides Diyoza? Where’s the other ship, and who’s on that one? Hopefully in time, all will be revealed.

The episode conducted a brilliant balancing act, between the sky and ground, and in addition to seeing Clarke’s dilemma unfold we get to focus on SpaceKru and their own worries, so many worries there were. Once they board the prisoner transport (despite a rocky landing due to Emori’s nerves), they predictably are faced with a harrowing decision: kill the defenseless murderers, or let them live and face the consequences later. I for one, was with Murphy when he suggested they eliminate the threat. It’s kill or be killed in the world of The 100, and unfortunately that’s the reality we are faced with in these circumstances. Sure, they want to be “good guys,” whatever that means now. But, overlooking the imminent danger to follow by doing nothing to preserve their future was kind of stupid of the groups part. Despite doing the totally wrong thing, it was a proud moment when Bellamy looked to Murphy for his opinion. After being told he’s no use to the group by Monty earlier in the episode, it was a subtle nod that John is still relevant and Bellamy values his input.

The compromise of leveraging the sleeping army for the lives of those on the ground, is one that Raven and Bellamy come up with together. There’s some speculation that they somehow knew Clarke was the one in trouble, but, I stick by my theory that Bellamy thinks it’s Octavia, and the rest of the bunkerkru that are in danger. It’s ironic that Raven would need to stay behind in order to carry out their plan, and be faced with the same decision that still plagues Clarke from her Mount Weather massacre days. I’m a bit shocked that the writers would separate Bellamy and Raven so quickly after merely catching glimpses of their leadership dynamic and making me love it oh so much. It’s also a disservice to the fans that Bellamy’s new name is now the “Best Dad in the Universe” and not “Captain Daddy.” Y’all really screwed the pooch with that switch up. No, I don’t think this is foreshadowing to Bellamy inheriting Madi and forming one great big family on the ground… but more on that later.

Emori throws John to the side, sacrificing his well-being over Raven’s, and my heart shatters into a million jagged pieces for Murphy. He still loves Emori, and the depression, or PTSD he’s going through that enables him to reconnect with her, or even recognize his worth, is gut-wrenching and hope can someday get resolved between them. Poor Murphy, he was under the assumption that there’s an escape pod on the Eligius ship, Murphy stays behind with Raven, because who would want to be in a flaming anal plug looking contraption on the way down to Earth with your ex-lover? Not me! Sure, it stinks to high heavens that Raven is always the one who gets left behind. But, I’m confident this isn’t the last time we’ll see her. And her time on the show is far from up.

Dat reveal though… Clarke is not dead, and Bellamy rushes to her rescue (with the help of Madi’s superfly detective, and weaponry skills) declaring that yes, she is more important than the lives of 283 people on board the Eligius ship. Speaking of ships, full disclosure: I am not a Bellarke shipper, nor do I care to see them together romantically. But, I would be doing the audience a disservice if I didn’t shout from the rooftops, or my cozy bed on the East Coast, the importance of their relationship, and their overall dynamic throughout the seasons. I especially love how their roles have been reversed and am looking forward to seeing it all play out for the rest Season 5. They’ve been separated for six plus years, and are now on opposite sides (again) when it comes to where their priorities lie. Clarke is much in mom mode out to protect Madi and the survival of her people, and Bellamy has Raven (and Murphy) to worry about, on top of digging his sister and the undergroundkru out of that failing bunker, and creating some peace treaty with psychopaths.

So much time has passed, and they might not completely be on the same page anymore. Which is expected. The real test will be if Bellamy can bring Clarke back from her new hardened exterior? Will he play nice with Madi once Octavia gets her bloody claws on her? There’s been hints that Madi/Bellamy’s relationship isn’t all rainbows and puppies…  Regardless of how you feel about the two leading characters and their relationship status, their reunion was moving, badass, and long overdue. Bellamy and Clarke will always be at the center of the show, in whatever capacity you see fit to define them as, and their journey is just beginning. Again.