It seems The 100 fans have gotten their own version of the ‘Body Snatchers’ in Sanctum’s elite families. After SpaceKru risked their lives yet again on a new terrain, hopeful that peace might actually be possible this time around– Sanctum’s leader Russell Lightbourne (J.R. Bourne) has done the unimaginable and hi-jacked Clarke’s body! (We knew you were janky, dude).

Now that Clarke’s mind has been erased (and replaced) with Russell’s impulsive daughter Josephine at its helm (who I love to hate and hate to love), there’s no telling what this deranged delight is going to do next. It’s safe to say though, that Josephine is pretty awful at ‘playing’ Clarke. Her five seconds of scheming was quickly thwarted, after recklessly exhibiting some non-Clarke like symptoms in front of Mama Griffin (Paige Turco), Gaia (Tati Gabrielle), and ultimately Bellamy (Bob Morley)– who got the pointy end of the tranquilizer after calling this imposter out on her tomfoolery.

One thing’s for certain, Eliza Taylor has showcased the entire gamut of human emotion in the first few episodes of Season 6 and that driving force shows no signs of slowing any time soon. So, what happens next? Now that everyone’s favorite delinquent Murphy (Richard Harmon) and pod person Josephine have teamed up (which I’m still hoping is a cleverly concocted ruse to infiltrate Josephine’s insane brain), I can’t help but wonder: if a cockroach and a sociopath walk into a bar… oh, what damage they could do.

As Josephine stumbled upon the secrets of synthetic nightbloods, and continues to take over the Clarke we’ve become accustomed to for the last five seasons for her own personal gain, the fate of The 100’s leading lady is unsettled. Taylor weighed in on an epic plot to recover Clarke’s lost mind (if it’s even possible), as well as playing such a contrasting character to that of her norm.

Will the gang finally overcome their past and become worthy of survival? Well…

MCKENZIE MORRELL | This season has been unlike any in the past. What aspect of season six were you most looking forward to, whether it be a new atmosphere, new costumes, or the ability to embody someone else?

ELIZA TAYLOR | I think I’m most excited for people to see the transformation from Clarke to Josephine. It was a really fun challenge for me and a welcome one since I’ve been playing Clarke for so long. It’s a real breath of fresh air to play someone completely different.

MM | What’s one quirk that you do as Josephine that you would never do as Clarke?

ET | In personality alone, she’s the complete opposite to Clarke. She’s slightly sociopathic and manipulative and selfish and she’s really carefree as well. She’s happy to have a laugh at someone else’s expensive which Clarke just isn’t. Physically, I just tried to change my facial expressions, I tried to alter my voice and mannerisms, the classic hair twirl being one of them.

MM | Did you have a favorite scene to play as Josephine?

ET | I think episodes five and six I really got to have some fun and there’s a great moment in episode five with Abby [Clarke’s mom] where she just completely manipulates her and I think it’s a really cool scene. We had a lot of fun shooting that one. Plus my scenes with Murphy as well.

MM | Clarke’s scenes with Murphy were my favorites. When it comes to Abby, I really loved her attempt to evade the unspoken question of “why are you using your right hand when you’re not a righty?” There were a lot of subtle touches in there where mom is kind of catching on but is preoccupied with other things. We learn from the flashback in 605 that the primes are mind-wiping their hosts and uploading themselves on to new bodies so they can essentially live on forever. What do you think went through Clarke’s mind when she was strung out on that table, paralyzed, learning the secret of sanctum?

ET | I think she was thinking “oh god, oh god, oh god, they’re going to kill me.” I think she would be so severely hurt and disappointed. She thought that they were in this beautiful peaceful place and finally getting a second chance to live good lives and low and behold, Sanctum is just as messed up as their previous experiences.

MM | You think you’re safe and then it’s even more screwed up. And in this season, Becca and her tech seem to be the driving force where we’re constantly learning more about the Primes and their version of surviving. When reading the script did you pick up any similarities between Sanctum’s cause and Mount Weather’s cause?

ET | Yeah I did. I think that it’s interesting that in episode three, Clarke gets a speech from Russell and Simone about Mount Weather killing innocent people because they’re one to talk [laughs]. I saw a lot of similarities in using innocent people to keep themselves alive, definitely.

MM | If you could swap consciousness with any of the characters on the show, who would it be?

ET | Murphy. I love the character.

MM | What would you do in Murphy’s body?

ET | What would she do? I think she would enjoy not having that responsibility.

MM | That would be a nice departure from Clarke’s norm! Clarke has been apologizing to everyone for her past actions. Do you think it’s been a fair process for her considering everyone has done terrible things throughout their journey as well?

ET | I don’t know that it’s entirely fair. They’ve all done very questionable things and they all have blood on their hands. She definitely takes it on the chin. I don’t think I would. They’re pretty harsh on her but they’ll probably feel pretty bad when they realize she’s not there anymore. 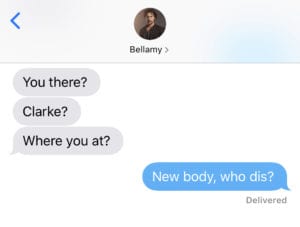 MM | Bellamy was the first person to figure out that Clarke wasn’t really Clarke in 605. Who do you think in your real life would notice first if you got mind swapped?

ET | I would say my mom because she is an incredible bullshit detector. I can’t say that, can I? [Laughs]

MM | You can say whatever your heart desires, Eliza!

ET | Thank you! Probably yeah, my mom. I remember when I first started doing TV and I got a bit too big for my boots, she was like “I don’t know this person.” She told me “you’re not the queen, stop acting like it.” And I’m so glad she saw that because I haven’t since. She’s so good at pulling me back down to earth. I reckon she’d be like “this isn’t my daughter.”

MM | When I did an interview with Patrick [Cotter] he said your mom would be the one that would be his harshest critic, and he would take it at face value since she wouldn’t lie to him– it’s awesome that you guys share that.

MM | Obviously things didn’t end well for Bellamy as Josephine knocked him out and introduced herself in Clarke’s body. Everyone keeps saying that Clarke is dead. Obviously you can’t spoil anything for us but when you read the script did you hope she was still in there somewhere trying to find a way back to her friends?

ET | Yeah. I think that it would be horrible to think that she’s completely gone, but what I find really cool and interesting is the way in which our heroes try to bring her back. I really think the writers did an amazing job with how it goes moving forward.

MM | Oh exciting. Since we’ve been talking about Murphy and our mutual fascination with him. At the end of 605, Josephine!Clarke propositions Murphy for the chance at immortality. Why do you think she thought he was going to be the most approachable person to help execute her big plan to make more nightbloods?

ET | I think she sees a little of herself in him. I think there are a lot of similarities in the way that they’re in it for themselves. She can see that he would take that opportunity as opposed to the rest who are more about morals.

MM | He’s the cockroach. He’s just trying to survive. We now get the sense that Josephine is after Abby and her ability to make the nightbloods. That would solve a lot of the primes problems in terms of finding viable hosts for their uploads. If you were in Abby’s upcoming predicament, would you help these strangers continue to use these people for their survival or would you be more apprehensive?

ET | Well if I was in Abby’s position, I would probably think it’s all too good to be true. But Abby is so preoccupied with saving Kane that she sees it as the only option and she doesn’t really care if it helps them. It’s more about bringing Kane back to life.

MM | And now what is one question that people never ask you during interviews that you wish that they would?

MM | Aww. I’m already a big fan of Clarke pizza thanks to my friend Aaron Ginsburg. But if you were to make a donut based on Clarke’s personality, what kind of donut would it be and what toppings would be on it?

ET | I’d probably go with a classic cinnamon donut because she’s straight up. You can’t go wrong with that. And it’s my favorite. [Laughs]

MM | Would Clarke’s donut differ from your donut, Eliza?

ET | Mine would have all kinds of crazy sprinkles and chocolate and glaze on it.

MM | I’ve been asking your fellow cast members to describe the rest of the season with three emojis, so let’s end there…

ET | I would do the crown emoji, the one that looks like its face is melting, and then the one with the brain explosion.

Watch The 100 on Tuesdays on The CW. Or if you want to watch the latest episode and missed it, you can stream on CWTV.com or The CW app the day after it airs.