Everyone has their own personal goals and missions. Whether it be to travel to the moon or to conquer the salmon ladder like Stephen Amell, we all have our own goals. In April, teenager Carter Wilkerson set a mission of his very own. That mission was to get free chicken nuggets for a year from Wendy’s! Little did he know that after this inquiry, he would soon be holding the record for one of the most retweets of all time: 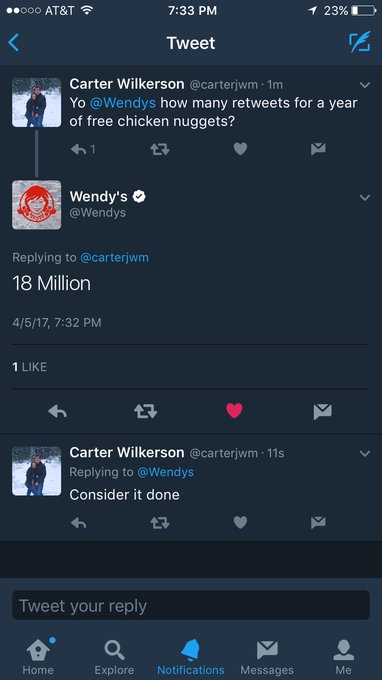 Today, Wilkerson’s plea for free nuggets broke the retweet record, according to Guinness World Records. His tweet was shared more than 3,470,000 times. Prior to this, the most re-tweeted tweet belonged to Ellen DeGeneres for her ‘Oscars selfie’. (3,430,249 retweets)

In addition to hundreds of screenshots and retweets, Wilkerson started a website that sells T-shirts for all fanatics of the chicken nugget. According to the website, all proceeds from the t-shirt sales will be donated to the Dave Thomas Foundation for Adoption.

Although Wilkerson hasn’t hit the 18 million mark (YET), Wendy’s still gave him the free nuggets for a year. In addition to this, Wendy’s has pledged to donate 100K to the Dave Thomas Foundation for Adoption.