Most horror loving fans, that are adults with young families, wish they could find a movie that’s appropriate for young children to see that won’t give them nightmares. As a self-proclaimed “Supernatural Punk Rock Romantic Comedy”, Teenage Ghost Punk fits that bill perfectly.

The official synopsis on the TGP website is: “Newly-divorced Carol moves with her kids, 16 year old Amanda and Adam, age 12, from rural Michigan to a Victorian house near Chicago. As the three begin to adjust to their new surroundings, strange things start happening. Creepy noises. Unexplained messes. Old punk rock albums missing. Suspecting the house is haunted, Adam and Amanda hire a wacky medium and a team of bumbling paranormal investigators to help, then discovers on their own that the house is haunted by the ghost of a 17-year-old punk guitarist named Brian, and his fun-loving band of dead pals. Amanda and Brian form a friendship that soon veers toward romance. When the past collides with the present, how will Amanda solve her future?” 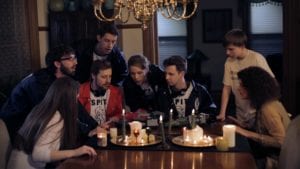 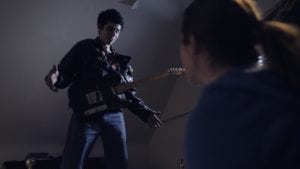 A movie that at first read sounded campy and silly, was a terrific surprise and I really enjoyed it. Creatively filmed, cleverly written, with solid acting and funny characters, this a great ghost story for the whole family. Everyone in the cast is an interesting and comical character; ones that are relate-able, funny and people you could imagine in real life. The music score filled with old punk and classic rock n’ roll, really took me back in time. Another thing I loved was the original punk rock on the soundtrack, performed by Jack Cramer (who plays the ghost Brian) and his friends under the name of The Raging Specters. 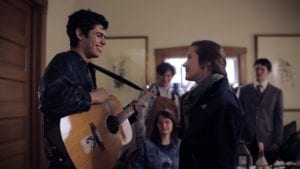 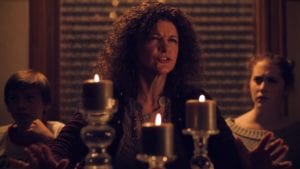 Teenage Ghost Punk is the second feature film from writer/director Mike Cramer. The supernatural comedy reminded me a little of the 1995 Casper; an old house, suburban setting and easy to look at spirits. The main difference being that the ghosts look like regular people from different eras. Our teenage love interest Amanda (Grace Madigan), relocates to a new town with her widowed mother (Adria Dawn) and precocious little brother Adam (Noah Kitsos). It’s endearing when Amanda finds friendship and eventual romance with the resident ghost, Brian.  This phantom-with-a-guitar, is also an ‘80s punk rock kid with a fondness for bands like The Ramones and The Clash; he spends most days playing poker with other spirits from the neighborhood as the world moves on without knowing they exist. At night he has long conversations with Amanda about history, music and life. Meanwhile, a group of paranormal investigators who go by the name of S.P.I.T. (Super Paranormal Investigation Team) are on a quest to rid the neighborhood of its ghostly dwellers. The S.P.I.T. group parody paranormal investigation TV shows with a hysterical abandon. They were some of my favorite characters from the movie. 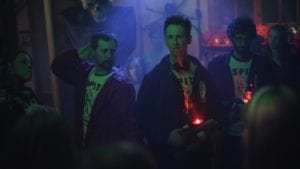 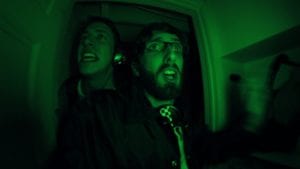 When asked what his inspiration for making Teenage Ghost Punk was- this is what Writer/Director Mike Cramer had to say:

“I was thinking about how some movie characters can do and say things we never do or say in day-today life that seem logical and realistic. Those characters have to live in a slightly different reality than ours. One night I was thinking about this while walking though my neighborhood in Oak Park, Illinois. Oak Park is one of Chicago’s oldest suburbs and many of the house are more than 100 years old. I often wonder about who has lived in them over the decades.

I started thinking that my neighborhoods, with that history, might have a different reality- one inhabited, by ghosts of some of the people who lived on these blocks years ago but still haunt them today. What if one of those ghosts is a kid who would have been close to my age, but is forever a teenager? What if that ghost loves punk rock, but is kind of stuck with his favorite music of the 1970s and ’80s as the world moves on around him? What if a living person  could have a special relationship with a non-living person who inhabits the same space? What questions could it raise, and what others could it answer?”

Teenage Ghost Punk has answered those questions for Mike and the audience, making it a family film to love. It never takes itself too seriously, made me laugh, and brought back memories of high school that were not traumatic, unlike the way most ghost films now intend. As Mike also shared. “It’s about relations between generations, the differences and things held in common. It’s about being open to different types of people – seeing the fun and the value in diversity. And it’s about moving on when it’s time.”

Teenage Ghost Punk is available to rent or own on iTunes, Amazon Instant, Google Play, Vudu, XBox, FlixFling, DirecTV, Comcast, FiOS, AT&T and more. You can find out more about the movie on their Website or Facebook page.