Teen Wolf once more delivered an evening of back-to-back episodes. In the first hour, Team Wolf searched for the unknown half of the Anuk Ite. Mason and Theo take to the sewers where they had a face off with Gerard’s army to look for Aaron, who they believe is still alive, while Scott and Liam try to figure out who from the Primal pack could be the other face. They find a cell phone with a message on it and Liam is able to determine that the voice is his science teacher, Mrs. Finch.

Lydia and Malia head to the morgue to try and get more information out of Halwyn. Malia “renders Lydia unconscious” so that she can once more have a vision of the dead Hellhound. Lydia wakes in the halls of Eichon and finds Halwyn trapped within one of the rooms. When Lydia regains consciousness, she tells Malia that Halwyn is in fact still alive. They get his body into an MRI machine and determine that the bullet was cased in silver and that is what’s hindering his regeneration capabilities. Lydia decides that they need to pull out the bullet so they can get as much information about the Anuk Ite as they can. Unfortunately, they won’t be able to extract the silver and it will kill him. They do so and learn that there isn’t really a way to stop the two-faced. The only thing they can do is stop the two sides from merging. If they do, then they’re all dead as a single look can kill them instantly. With that, Halwyn dies.

Liam and Scott approach Mrs. Finch and find out that she isn’t the werewolf they’re looking for. Instead, they need to locate her daughter, Quinn. But Quinn comes to them and she is indeed the other half of the Anuk Ite. Down in the sewers, Mason and Theo find Aaron. Theo attacks the Anuk Ite, wounding him. This also causes wounds to appear on Quinn’s body and she starts screaming. Her screams draw Aaron’s attention and he runs to her.

Liam runs into the library to find Quinn and Aaron merge. They two sides fight, and Aaron snaps her neck before absorbing her spiders into him. Aaron transforms, the skin on his face disappearing and just being the muscles covering his skull. He turns on Liam, but Lydia arrives just in time. She pulls Liam from the library, telling him not to look, and they flee. Some of Gerard’s hunters aren’t so lucky though as they appear to take out Liam. Gabe is among them, but hides as the other two are killed with a single look from the Anuk Ite.

The Anuk Ite goes to the hospital, killing those that look up on him as he makes his way to the morgue. He pulls out Halwyn’s body and is disappointed to find him dead. Then, Gerard appears. He offers the Anuk Ite one of his silver bullets, telling him that there is no way that he can match Scott physically. The only way is to side with Gerard and use his bullets.

In the second episode of the evening…Derek is back!

We learn why he is at the top of FBI’s Most Wanted. He just happened to be in the wrong place at the wrong time as he investigated the slaughter of 18 werewolves. Chris is trying to find Derek because he believes that he can help them take on the Anuk Ite. 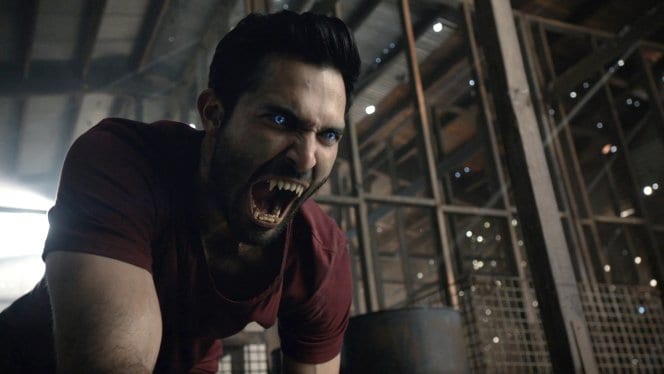 Unfortunately, the FBI aren’t that far behind. They stop Chris and Derek when they are suddenly shot from behind by an agent. Welcome back, Kate Argent. She is on a delivery for Gerard, bringing him wolfsbane that they will infuse into a bullet meant for Scott. Derek goes after Kate while Chris goes to warn Scott.

Tamora isn’t wasting any time mustering the army for war. She praises Nolan for taking the initiative to shoot up the McCall house, even though he didn’t have anything to do with that (but Gabe said he did). While giving a motivational speech about finally standing up and not living in fear, Tamora is torturing Ethan. Afterward, she tells Nolan and Sydney to take Ethan away.

Nolan has had a bit of a change of heart and goes to Liam, saying he wants to show him something. They arrive at the hospital to find Ethan and Jackson (I think, but maybe not) sedated by a wolfsbane IV drip. Liam calls Mason and Corey, asking for their help. Nolan then leaves him, saying he can’t be seen with Liam. On the way out, Nolan runs into Gabe, who thanks him for doing exactly what they wanted him to do. The entire thing was a trap. The Hunters plan to take them out at the hospital.

Scott and Malia decide to ask Deucalion for help once more, but in a different way. They want to learn how to fight without relying on their eyes since that’s how the Anuk Ite kills. Deucalion doesn’t have much confidence in them, saying it took him years to master his skills, and they only have a day. He pits Malia and Scott against each other, teaching them to rely on heat signatures and echo location. In the end, Scott kind of starts to get it, managing to take down Deucalion.

Lydia has had yet another vision. This time, she wakes and says two words, “Where’s Jackson?” She and Peter meet up at the McCall house looking for Scott. Lydia then recounts her vision to him, saying that she saw everyone turned to stone by the Anuk Ite. She says that she was wondering around a shipping container yard. Peter knows where that is and they head off to find Scott.

They arrive just as Scott beats Deucalion and the werewolf admits that Scott might have a chance. Unfortunately, Tamora and her hunters arrive. They shoot Deucalion, killing him. Tamora then turns the gun at the rest of the group and pulls the trigger.

Another cliffhanger where we don’t know who was shot! Come on!

There is one episode left in the series and I have no idea how it’s going to play out. No one is safe at this point. The Hunters are in position to take out every supernatural in Beacon Hills as they have been collecting a list of everyone in the town through tests or police and medical reports. It’s not looking so good for Scott. But hopefully Derek and Chris will arrive in time to save the others.

All I know is that the series is definitely going to go out with a bang.

Teen Wolf‘s 100th and final episode is called ‘The Wolves of War.’