Enola Holmes is back in a new movie coming out soon. The first photos from the movie were released this week. It will be a reunion between Millie Bobby Brown (from Stranger Things), Henry Cavill, and Helena Bonham Carter. Louis Partridge is also returning as Enola’s love interest, Viscount Tewkesbury.

In the sequel to “Enola Holmes,” the title character takes on her first official case. She has to find a missing girl and solve a dangerous conspiracy. To do this, she will have to call on her friends and Sherlock. One of the new photos PEOPLE published shows Enola in a carriage, wearing handcuffs! Entertainment Weekly also shared a photo of Enola running from police officers. Netflix also shared the pictures on Instagram.

Harry Bradbeer, the director of the show, said that when Enola and Sherlock meet, they are not working in the way they expect. They start working on separate cases that surprisingly connect. “It will be an emotional journey for both of them, and in particular for Enola,” Bradbeer added.

The new film is “grittier” than the first one, Bradbeer told EW. It’s set mostly on the streets of London, which weren’t visible in the first film. Enola is a fish-out-of-water in her second adventure, far from the upper-class world she was familiar with. “We got to really see what this young girl is doing in this crazy city that surrounds her night and day, and we get to explore these places in great detail,” Brown told EW. 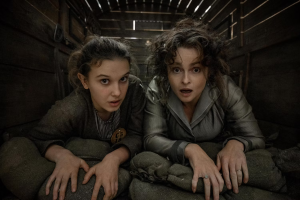 Enola Holmes 2 will introduce David Thewlis and Sharon Duncan-Brewster to the franchise. They may play important roles in the central mystery, but Brown and Cavill said the new film is more focused on exploring Enola and Sherlock’s relationship. Although the two stars have a large age difference, they still have good chemistry.

“Being able to play his younger sister, it’s quite easy,” Brown said. “I have an older brother, and I know how easy it is to annoy him, get on his nerves, make him laugh. I know his weaknesses. I know his strengths. I just use that with my brother, so I used that on Henry, too.”

Enola Holmes is a movie franchise that is based on a series of books written by Nancy Springer. The sequel, Enola Holmes 2, will be released on Netflix on Nov. 4.

What I’m into, I write about.